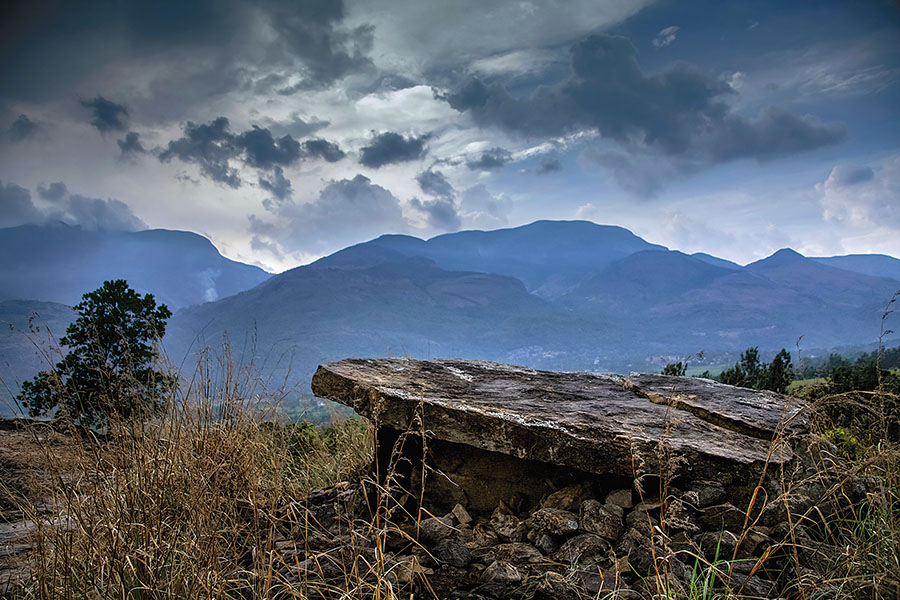 We spent the better part of that cold afternoon huddled together on an ancient hill, a discoloured haze permeating our bones. The reason we were freezing our tails off: Stones! But not just any stones: Blocks and plates of rough-hewn granite organised into impromptu chambers and strewn across the hilltop. They are the venerable dolmens of Marayoor, some of the first tombs built during the Iron Age in South India. These lichen-pasted sentinels, having long-outlived their responsibilities, now gently meditate on a hilltop.  Two of my friends, my boyfriend and I had arrived in Kerala five days ago for a no-action vacation. We hung around Fort Kochi for two days, exploring waterfronts, sampling fusion cuisines, and sipping ilaneer cocktails in our Nalukettu-style hotel. On the third day, satisfactorily de-stressed, we hopped on a dusty orange bus headed to Alappuzha, the alleged Venice of the East.

As someone who has drifted in gondole along mucus-green Venetian canals, I can assure you that calling Alappuzha any kind of Venice is white-people nonsense. The emerald lagoons in Kerala’s backwaters are unsurprisingly charming—coconut trees thickly flank the shores, dropping sun-flecked shadows on the water. We lazed around the lagoon watching cormorants carving into the water for fish, distant trawlers stalking the horizon, and snake boaters practising for the Nehru Trophy Boat Race. Our final destination on this trip was Marayoor, a sleepy little hill station in the Idukki district, 40 km north of Munnar. Unlike Munnar, however, Marayoor (roughly meaning hidden land) also hosts the relics of a megalithic culture, piquing the history buff in me. On my earlier attempt a few years ago, I had made the mistake of choosing an Aanavandi bus. True to its name (elephant-vehicle in Malayalam), it had rampaged through both high traffic and hairpin bends with equal nonchalance, caring neither for itself nor its terrified occupants. Luckily this time, we managed to find an SUV with a sane driver. The first half of the journey was bland, a series of pastoral pastiches, but as we crossed the Periyar River and entered the Western Ghats, monotonous green abruptly morphed into kaleidoscopic rainforest. The vehicle meandered along narrow roads etched into hillsides, rising higher and higher, until we glimpsed that irrevocable emblem of the Indian hill station: Tea estates. Undulating swathes of green, chaperoned by occasional flares of silver oak and gulmohar, swarmed the Anchunadu  Valley that expanded below us. It was rather late by the time we reached our homestay and went directly to bed. The rest of the night, with its cricket-chirps and boyfriend-snores, was largely uneventful. 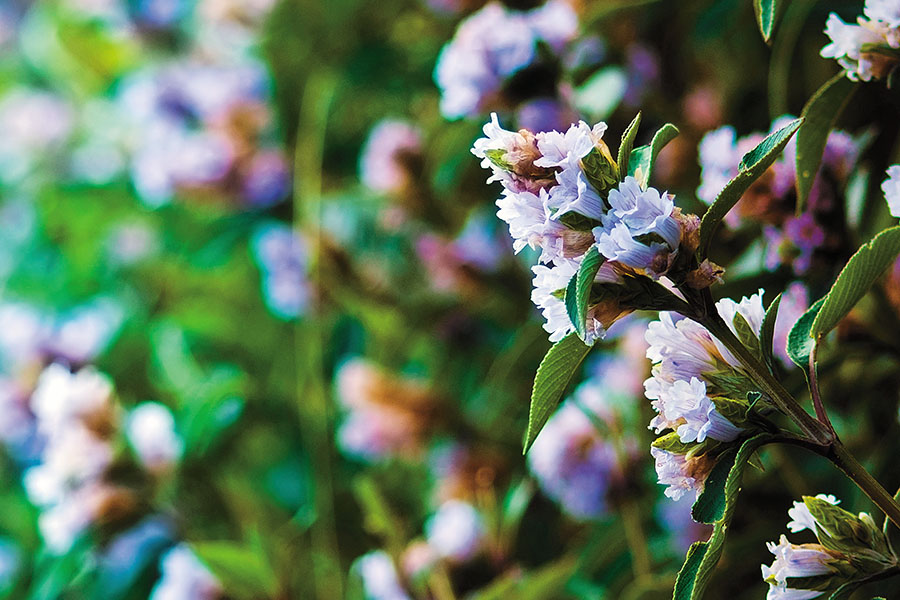 The neelakurinji flowers only once in 12 years
Image: Shutterstock

Marayoor mornings come with their own pandemonium: We were jolted awake by a noisy soundscape of hornbills, thrushes, wood pigeons and sunbirds, perforated by the hooting of Nilgiri langurs. Our initial agenda was to locate and experience the blossoms of the neelakurinji, which flowers only once in 12 years. Sadly, this proved futile—the flowers had decided to bloom on the other side of the Western Ghats this year—leaving our afternoon wide open.  Our auto driver, a genial young man named George, suggested taking us to see, “some decrepit hilltop tombs that tourists and lovers are fond of”. We agreed, and soon we were rattling away to Murugan Para hill in Kovilkadavu village, 3 km south of Marayoor town. We climbed the slope on steps made of broken rocks, and were greeted by a cloud-capped vista. Tree-covered peaks lined the horizon, and below us were hectares of farmland, bisected by the glistening Pambar River. And there, almost invisible, lay the ancient stone tombs known as megalithic dolmens. The megalithic (great-stone) period occurred between 10,000 BCE and 500 CE. As its name denotes, it was marked by specialised modes of burial known as megaliths—burial places made of large stones. Including dolmens, several types of megaliths have been discovered across the world, such as cists (pitted chambers), menhirs (pointed marker stones), cairns (rock piles), and sarcophagi (stone coffins). Anthropologists believe that the emergence of megaliths is the first definitive sign of humanity developing a belief in the after-life. While ceremonious disposals of the dead (internment, cremation, sky burial) have been in use for over a hundred thousand years, they seem to have been of a pragmatic nature, mainly to avoid corpse-borne diseases. The Marayoor dolmens exemplify their architects’ belief in reincarnation. Four plates of granite made the walls; the dead, wrapped in leafy shrouds, was placed inside in a sitting position; the final plate (known as a capstone) served as the roof. Several dolmens also have a hole or gap in one of the wall stones to allow the soul to flow back and forth between the body and the aether. The Manimekalai, one of the five epics of Tamil literature written around 500 CE, hints at religious undertones in the complex funeral rites in South India—mentioning means of burial such as stone chambers, pits, urns and sarcophagi. Even today, this spiritual aspect is reflected in local legend: Dolmens are known as muniyara, or rooms where munis (sages) meditate. Nobody knows exactly how the Marayoor dolmens originated. Researchers have been studying them since the early 1900s, but all they can confirm is that the megalithic architects belong to at least one of many pre-Dravidian tribes—the Malpatarams, the Paniyans, the Uralis, the Kadars, the Muthuvans, among others. Interestingly, megaliths found in all five South Indian states are relatively new. The oldest megaliths, such as those in Gobekli Tepe (Turkey), Atlit Yam (Israel), Carnac Stones (France), pyramids (Egypt) and Stonehenge (England) are between 5,000 and 12,000 years old. Further, given South India’s genealogical dislocation from the rest of the ancient world, more questions have arisen as to where these prehistoric builders obtained the knowledge of megalithic construction. Even here, scholars are divided between trade and migrations from the Arabian Peninsula, Egypt, Rome, Tibet, and Western Europe. 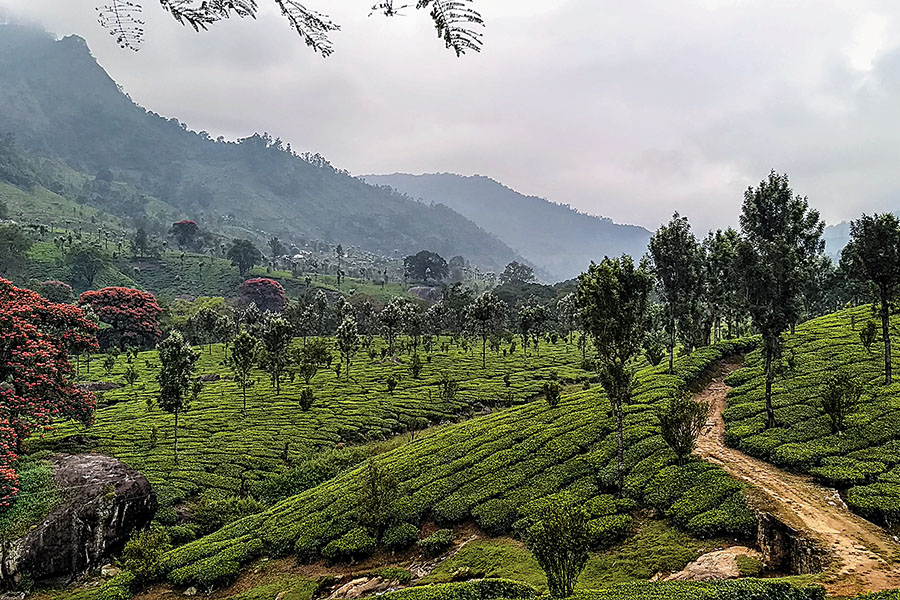 Silver oaks add to the beauty of Kerala’s tea estates

One thing universal to megalithic period across the world is the presence of iron artefacts—weapons, urns, plates, jewellery—that were thought to help the soul in the afterlife. In fact, several objects found in South Indian megaliths were made from Wootz steel, a unique iron-carbon alloy that was invented when bamboo and avaram leaves were accidentally smelted with iron ore (it was so resilient that it dominated the steel markets of the eastern hemisphere until the 17th century CE). The presence of Wootz relics in the Marayoor dolmens dates their creation all the way back to the first millennium BCE. Additionally, in the past few decades, there has been a spate of discoveries associating megaliths in Tamil Nadu and Karnataka with the Indus Valley Civilisation. Archaeological excavations reveal artefacts inscribed with the indecipherable Indus Valley Script, implying a Dravidian origin for the Harappan language, and perhaps, peoples. With a heritage such as this, you could presume that the legacy of megalithic India would be cared for. Our first look around Murugan Para hill suggested otherwise. The dolmens were secured with rusty chain-link fences, some of them already flattened by the high winds. Dense patches of grass shielded many of the dolmens from view. All sorts of tourist trash littered the site. Scrawls of graffiti, mounds of displaced rubble, nascent termite nests, and, inexplicably, a teetering Tower of Hanoi atop a capstone indicated that they were not exactly at the peak of health. After some time, we saw an old woman, Saroja, walking around the hill, uprooting weeds and sweeping garbage. When I struck up a conversation with her, she told me that she has been coming up here for the past two decades to mend the fences and clean up after irresponsible visitors visited the place. I asked her why the government was doing nothing to preserve this prehistoric site. Saroja blinked like I had asked her the stupidest possible question and chuckled, “The government cares more about bribes than tradition.” I later found out that the Kerala Archaeology Department had appointed two guards for the dolmens, but they were nowhere to be found (this could have been why some of the villagers had managed to secrete away a few slabs to use as washing stones, kitchen countertops and even makeshift trash bins). No such custodial disinterest is shown in preserving the megalithic sites of other countries, many of whom have been accorded Unesco heritage standards. And yet, somehow, the dolmens of Marayoor still stand, stubbornly weathering climatic diversity and human ignorance. We stayed there all afternoon, watching the sun arc behind Mount Anamudi, the tallest peak in the Ghats. As we walked back to the homestay, darkness fell. It was a new moon night; even the trees along the roadside looked like black skeletons. And then suddenly, a burst of fireflies, which almost felt like spirits of the ancient dead. These microscopic lanterns swaddled us, their lights too dim to show the way, but just enough to say: We are here.