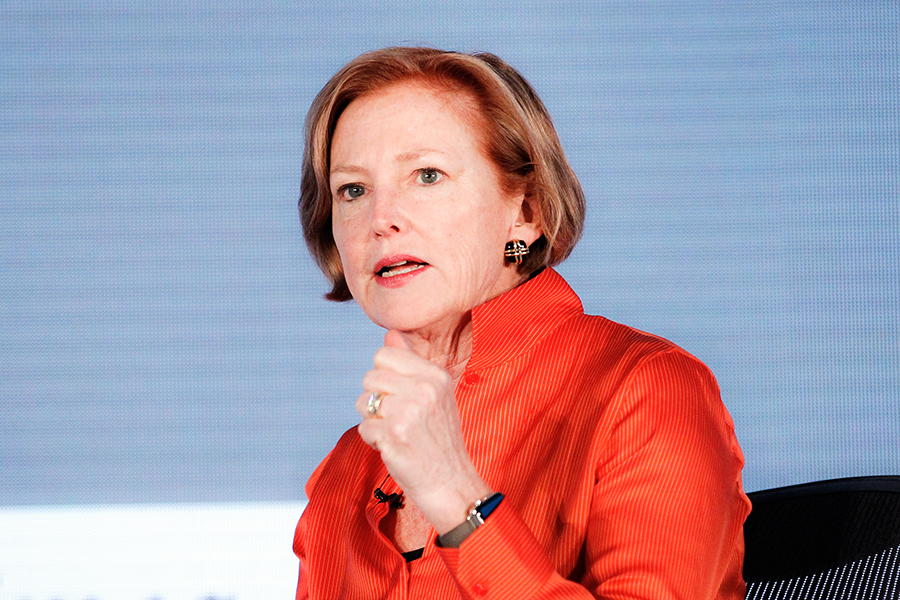 Ellen Kullman has spent her career leading some of the world’s largest public companies, from General Electric to DuPont.

After decades of running well-established firms, Kullman has shifted her efforts to two ventures that are just beginning.

Kullman, a recent guest of the Distinguished Speakers Series at Duke University’s Fuqua School of Business, is now president and CEO of 3D printing startup Carbon and co-chair of Paradigm for Parity, two new organizations she believes will reinvent not only how companies develop their products, but also how they develop the next generation of leaders.

In a conversation with Fuqua Dean Bill Boulding, Kullman described leading a Fortune 500 company through challenges with shareholders and the EPA, guiding a fledgling technology company, and what business schools and firms must do to bring more women to their leadership ranks.

“I hear a lot of people say we have a meritocracy,” Kullman said. “But at the end of the day, if everybody in your organization looks white [and] male, it’s probably not a meritocracy. The interesting thing is, creativity and innovation is not just in one section of the population. Women are graduating from college at the same rate as men, we’re entering the workforce at the same rate as men, but with every successive rung up that ladder, less and less women are there.”

Increasing diversity through relationships
To encourage diversity in their firms, business leaders should consider how relationships influence promotions, she said (see video clip).

“I’m a big believer in sponsorship, because the men in the room, in my experience, who are being considered for promotions – there are people in the room who advocate for them more often than [they] advocate for women,” Kullman said. “And it’s because they just don't know the women well enough. They haven't created that relationship with them.”

Through sponsorship, Kullman said, companies could ensure all candidates for leadership roles have someone advocating on their behalf so the best candidate is the one chosen for the job.

Many startups begin “technology-forward,” focused on the product, she said. But taking a company from startup to market-player requires better understanding of the customer, she said.

Carbon plays a unique role in the 3D printing landscape, as it focuses not simply on prototyping as other 3D printing startups do, but on helping manufacturers scale production, Kullman said.

She offered bicycle manufacturer Specialized as an example. Carbon helped Specialized both design and produce 1,000 units of a new bicycle saddle.

Historically, the company would have to invest a lot up front and may need to produce 10,000 or even 100,000 saddles to break even, Kullman said. With low up-front investment and quick prototyping and production time, Carbon helped Specialized take a two-year project and turn it into a months-long project with immediate financial gain, she said.

To lead, be yourself
Great business leaders have to be true to themselves, Kullman said (see video clip).

“I'm much more effective when I’m me, and not trying to be a CEO or trying to be somebody I’m not,” she said.

That echoes the best advice she received when she was taking the helm at DuPont, and that advice came from her predecessor: “What he said is, ‘If you just be you, you'll do great.’ And I think that’s a hard thing to learn early in your career because we’re always second-guessing ourselves. … But I think you’ve got to be true to yourself.”