For the protesters chanting loudly outside Justice Brett Kavanaugh's home, incivility was the point. They said they wanted to impinge on his privacy with picket signs and chants to condemn the Supreme Court justice's apparent support for ending the constitutional right to privacy that guaranteed access to abortion nearly 50 years ago 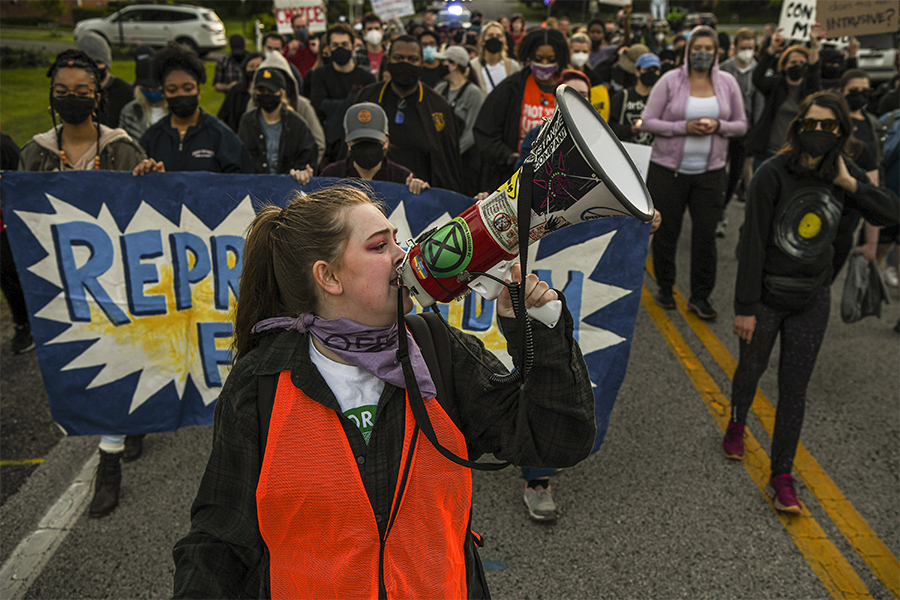 Demonstrators march to Justice Samuel Alito’s home for a candlelight vigil as part of an abortion rights protest, in Alexandria, Va., May 9, 2022. The demonstrations outside Supreme Court justices’ homes have sparked a debate over what counts as appropriate forms of protest in a deeply polarized country. Image: Kenny Holston/The New York Times

WASHINGTON — For the protesters chanting loudly outside Justice Brett Kavanaugh’s home, incivility was the point.

They said they wanted to impinge on his privacy with picket signs and chants of “We will not go back!” to condemn the Supreme Court justice’s apparent support for ending the constitutional right to privacy that has guaranteed access to abortion since Roe v. Wade was decided nearly 50 years ago.

“We can be noncivil,” insisted Lacie Wooten-Holway, a 39-year-old teaching assistant who has been protesting regularly outside the home of her neighbor, Kavanaugh, since October. She called it “absolutely insane” that the court might dictate what women do “with the only literal home we’ll have for the rest of our lives, which is our bodies.”
But the protests outside the homes of several justices, which erupted after the leak of a draft opinion indicating the court’s conservative majority is ready to overturn Roe, have sparked another searing debate about appropriate forms of protest at a moment of enormous upheaval in a deeply polarized country.

Although they have been largely peaceful, the protests at the homes of Kavanaugh and Justice Samuel Alito have drawn criticism from Republicans, who angrily accused Democrats of improperly pressuring the court. Justice Clarence Thomas said the court’s conservatives were being “bullied.” Sen. Tom Cotton, R-Ark., called for the protesters to be prosecuted criminally.

Those critiques have drawn a fierce rebuke from supporters of abortion rights, who point to years of protests by opponents of abortion in front of abortion clinics and the homes of doctors. And they accuse Republicans who defended the Jan. 6 attackers at the Capitol of hypocrisy for being suddenly gripped by concern about passionate protesters.

Many of the protesters have expressed concern that the scrutiny over the protests has distracted from the real issue — restricting a woman’s right to have an abortion — that has prompted the demonstrations. The administration has expressed similar concerns.

But the debate underscores the divisions in a country that cannot even agree on how or when to protest its disagreements. And it foreshadows a potentially more confrontational period this summer if the court issues a final opinion that overturns the right to abortion.
The White House has tried to balance both sides of the debate.

Asked about the protests outside justices’ homes last week, White House press secretary Jen Psaki said she did not have “an official U.S. government position on where people protest,” adding that President Joe Biden wanted “people’s privacy to be respected.”
After an outcry from critics of the protests at justices' homes, Psaki said on Twitter that while the president believed in the right to protest, “that should never include violence, threats or vandalism.”

“Judges perform an incredibly important function in our society, and they must be able to do their jobs without concern for their personal safety,” she wrote.

Many Democrats have shrugged off criticism that the protests are inappropriate, noting that protesters often demonstrate outside their homes as well. But Sen. Dick Durbin, D-Ill., chair of the Judiciary Committee, called protesting outside the homes “reprehensible.”

And the Senate passed a bill this week to provide security for the immediate relatives of the nine justices if the Supreme Court marshal deems it necessary.

Wooten-Holway said she tried to abide by a set of rules: The protest must remain peaceful and remain on public property outside Kavanaugh’s home, where she said attendees bearing ponchos and signs crowded into the tree-lined street of the suburban neighborhood of Chevy Chase, Maryland.

In Alito’s neighborhood in Alexandria, Virginia, demonstrators flanked by police cars walked through the streets hoisting signs, including one that asked, “Does this feel intrusive?”

But critics say the protesters should not be there at all. Some Republicans have pointed to a 1950 federal statute that says those “with the intent of influencing any judge” who “pickets or parades in or near a building housing a court of the United States, or in or near a building or residence occupied or used by such judge” would be breaking the law. The Justice Department declined to comment when asked about potential prosecutions.

“You must vigorously investigate and prosecute the crimes committed in recent days,” Sen. Josh Hawley, R-Mo., wrote in a letter to the Justice Department. “The rule of law demands no less.”

The protests have not been limited to Washington. Over the weekend, Sen. Susan Collins, R-Maine, called the police on demonstrators who used chalk on the sidewalk outside her Bangor home to write a message asking her to support abortion rights legislation. Two churches in Colorado were vandalized last week with spray-painted messages of “my body, my choice.”

Rebecca Overmyer-Velázquez, a Whittier College professor focusing on global social movements, said history has shown that protests — even ones that make people uncomfortable — are at times necessary to create change. She pointed to the civil rights movement, when college students like John Lewis, who went on to become a congressman from Georgia, were arrested dozens of times for sitting at whites-only lunch counters and in other protests against Jim Crow-era laws in the South.

“I’m not convinced that the line is whether it’s legal or illegal,” Overmyer-Velázquez said. “I think the question is: Is this decision really going to impact our lives very, very seriously? And it is, no doubt.”

She said the question was not whether protests were legal, but whether they were “moral.”

In recent days, Wooten-Holway, who said she had had an abortion and survived sexual assault, decided to take a break from the demonstrations after anti-abortion campaigners gathered outside her home last weekend and her family received threatening messages.
She has since decided to hire private security. She drew a distinction between her protesting across the street from Kavanaugh’s home and those who gathered outside her home this weekend.

“I’m protesting the fact Kavanaugh is trying to strip rights, and they’re protesting me exercising the First Amendment,” she said. “And I don’t have a wall of security.”

Tweets by @forbesindia
What will sports marketing look like in 2022 & 2023?
Our top reads of the week