The combined yearly revenue of Amazon, Apple, Alphabet, Microsoft and Facebook is about $1.2 trillion, more than 25 percent higher than the figure just as the pandemic started to bite in 2020 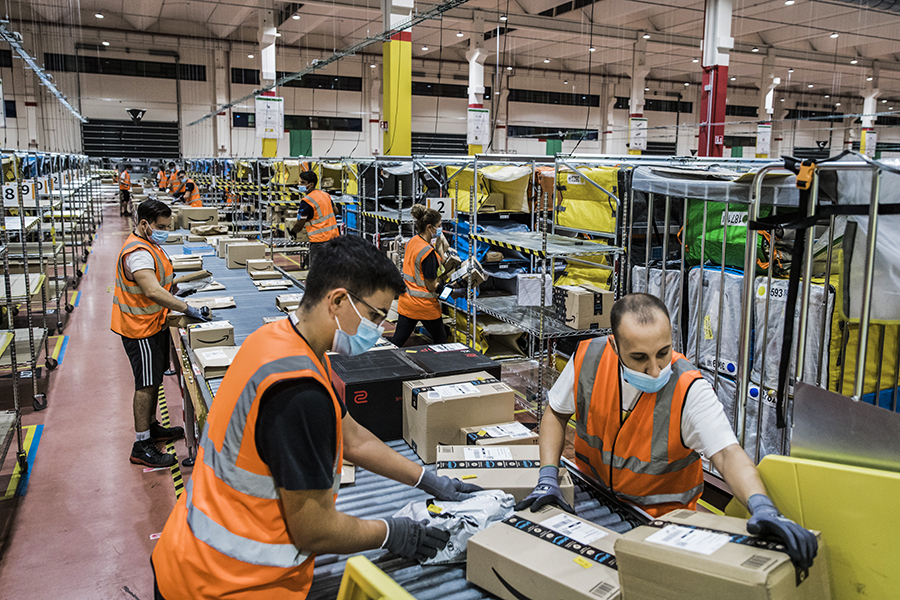 Workers process packages at an Amazon facility in Arzano, Italy on Sept. 18, 2020. In the great recession of 2008, big tech companies hit a rough patch just like everyone else. In 2021, they have become unquestioned winners of the pandemic economy.
Image: Gianni Cipriano/The New York Times

In the Great Recession more than a decade ago, big tech companies hit a rough patch just like everyone else. Now they have become unquestioned winners of the pandemic economy.
The combined yearly revenue of Amazon, Apple, Alphabet, Microsoft and Facebook is about $1.2 trillion, according to earnings reported this week, more than 25% higher than the figure just as the pandemic started to bite in 2020. In less than a week, those five giants make more in sales than McDonald’s does in a year.
The U.S. economy is cranking back from 2020, when it contracted for the first time since the financial crisis. But for the tech giants, the pandemic hit was barely a blip. It’s a fantastic time to be a titan of U.S. technology — as long as you ignore the screaming politicians, the daily headlines about killing free speech or dodging taxes, the gripes from competitors and workers, and the too-many-to-count legal investigations and lawsuits.
America’s technology superpowers aren’t making bonkers dollars despite the deadly coronavirus and its ripple effects through the global economy. They have grown even stronger because of the pandemic. It’s both logical and slightly nuts.
The wildly successful last year also raises uncomfortable questions for tech company bosses, the public and elected officials already peeved about the industry: Is what’s good for Big Tech good for America? Or are the tech superstars winning while the rest of us are losing?
Americans have more money in their pockets thanks to government stimulus checks and pandemic savings, and the tech giants are getting a significant share. Their combined revenue is equivalent to roughly 5% of the gross domestic product of the United States.
Big Tech’s pandemic big bucks have an understandable root cause: We needed its services.
People gravitated to Facebook’s apps to stay in touch and entertained, and businesses wanted to pay Facebook and Google, which Alphabet owns, to help them find customers who were stuck at home. People preferred to buy diapers and deck chairs from Amazon rather than risk their health shopping in stores. Companies loaded up on software from Microsoft as their businesses and workforces went virtual. Apple’s laptops and iPads became lifelines for office workers and schoolchildren.
Before the pandemic, America’s technology superpowers were already influential in how we communicated, worked, stayed entertained and shopped. Now they are practically unavoidable. Investors have scooped up Big Tech shares in a bet that these companies are nearly invincible.
“They were already on the way up and had been for the best part of a decade, and the pandemic was unique,” said Thomas Philippon, a professor of finance at New York University. “For them it was a perfect positive storm.”
Times weren’t so good for these companies in the last economic rough patch. In the downturn from 2007 to 2009, Microsoft’s sales dropped slightly, and its stock price fell 60% from the fall of 2008 to March 2009, a low point for U.S. stocks. Google and Amazon each lost as much as two-thirds of their market value.
One sign of how this time is different: Amazon’s revenue is growing much faster in 2021 than it did in 2009, when the company was one-fifteenth its current size. Sales in the first quarter rose 44% from a year earlier, and Amazon’s profits before taxes — which have never been exactly robust — more than doubled to $8.9 billion. Businesses are addicted to Amazon’s cloud computer services, where sales rose 32%, and shoppers can’t live without Amazon’s delivery. Investors love Amazon, too. The company’s stock market value has nearly doubled since the beginning of 2020 to $1.8 trillion.
For the other tech giants, it’s as if their brief pandemic nosedive never happened. Advertising sales typically rise and fall with the economy. But as other types of ad spending shrank when the U.S. economy contracted last year, ad sales rose for Google and Facebook. The growth was even better for them in the first three months of this year.
A year ago, analysts worried that Apple would be crippled as the pandemic gripped China, which is the hub of the company’s manufacturing operations and its most important consumer market. The fears didn’t last long. In the first three months of 2021, Apple’s revenue from selling iPhones increased at the fastest rate since 2012. Sales in mainland China, Taiwan and Hong Kong nearly doubled from a year earlier.
The tech superstars have also capitalized on this moment. Alphabet and Facebook have used the pandemic to cut back in places that matter less, such as promotional costs and travel and entertainment budgets. And the tech giants have generally increased spending in areas that extend their advantages.
Alphabet is now spending more on big-ticket projects, like building computer complexes, than Exxon Mobil spends to dig oil and gas out of the ground. Amazon’s workforce has expanded by more than 470,000 people since the end of 2019. That deepens the moat separating the tech superstars from everyone else.
Big Tech is emerging from the pandemic lean, mean and ready for a U.S. economy expected to roar back to life in 2021. Meanwhile, there are still long lines at food banks. Some American workers who lost their jobs last year may never get them back. Housing advocates are worried that millions of people will be evicted from their homes. And being Big Tech is an invitation for everyone to hate you — but you do have towering piles of money.