In a race to shape the future, history is under new pressure

History is continuously rewritten, whether by scholars updating their assumptions, activists reframing the record, or politicians massaging collective memory for their own ends 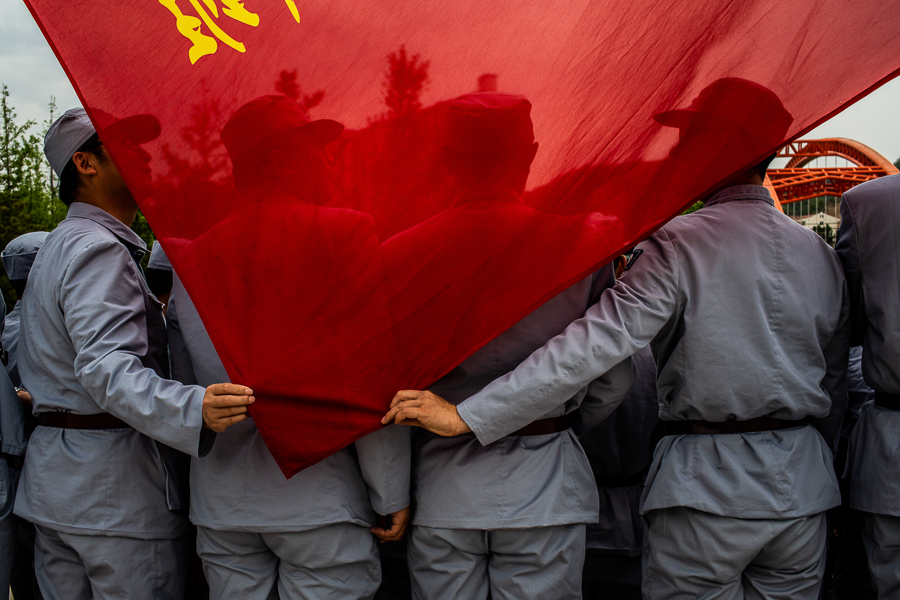 Aerospace workers wear Long March replica uniforms for a photo in Yan’an, China, May 8, 2018. A wave of misleading revisionism has become epidemic in both autocracies and democracies. It has been notably effective — and contagious. Image: Bryan Denton/The New York Times

In Russia, an organization dedicated to remembering Soviet-era abuses faces state-ordered liquidation as the Kremlin imposes a sanitized national history in its place.
In Hungary, the government has ejected or assumed control of educational and cultural institutions, using them to manufacture a xenophobic national heritage aligned with its ethnonationalist politics.
In China, the ruling Communist Party is openly wielding schoolbooks, films, television shows and social media to write a new version of Chinese history better suited to the party’s needs.
And in the United States, Donald Trump and his allies continue to push a false retelling of the 2020 election, in which Democrats stole the vote and the Jan. 6 riot to disrupt President Joe Biden’s certification was largely peaceful or staged by Trump’s opponents.
History is continuously rewritten, whether by scholars updating their assumptions, activists reframing the record, or politicians massaging collective memory for their own ends.
But a wave of brazenly false or misleading historical revision, from democratic and authoritarian governments alike, may be threatening an already-weakened sense of a shared, accepted narrative about the world.
The trend, scholars believe, reflects some of the century’s defining forces. Polarized societies receptive to identity-affirming falsehoods. Collapsing faith in central institutions or arbiters of truth. Rising nationalism. Despots growing savvier. Elected leaders turning increasingly toward illiberalism.
As a result, “we should be more likely to see the sort of historical revisionism” pushed by these leaders, said Erica Frantz, a Michigan State University political scientist.
In some places, the goals are sweeping: to reengineer a society, starting at its most basic understanding of its collective heritage. Emphasizing the importance of that process, China’s leader, Xi Jinping, has repeated a 19th-century Confucian scholar’s saying: “To destroy a country, you must first eradicate its history.”
But often, the goal is seemingly more short-term: to provoke rage or pride in ways that will rally citizens behind the leader’s agenda.
Trump’s election lies appear to be a successful example. They have splintered Americans’ shared sense of reality in ways that could strengthen Trump’s allies, justifying efforts to control the machinery of future elections. If global trends that enable such tactics continue, there may be more like this to come.

One set of changes may be particularly important in driving this trend: how governments tend to govern.
Authoritarianism “is undergoing a transformation,” one recent academic paper said, summarizing the growing view among scholars.
Since the Arab Spring and “color revolution” uprisings of a decade ago, dictators have shifted emphasis from blunt-force repression (although this still happens, too) to subtler methods like manipulating information or sowing division, aimed at preventing dissent over suppressing it.
Among other changes, the blaring state newspaper has been replaced with arrays of flashy, state-aligned outlets and social media bots, creating a false sense that the official narrative is not imposed from on high but emerging organically.
More sophisticated propaganda, aimed at persuasion over coercion, often manifests as a particular sort of historical rewriting. Rather than simply excising disfavored officials or government blunders, it cultivates national pride and collective grievance meant to rally citizens.
The Kremlin, for instance, has massaged memories of the Soviet Union and its fall into a heritage of Russian greatness and besiegement, justifying the need for a strong leader like Vladimir Putin and encouraging Russians to gratefully embrace him.
This manifests in smaller ways, too. Putin has falsely insisted that NATO pledged never to extend east of Germany, justifying his recent aggression toward Ukraine as defensive and necessary.
Democracies are changing just as dramatically, with leaders growing more illiberal and strong-fisted.
The widening social divides, along with the growing popular distrust of experts and institutions, often help elevate those leaders in the first place.
This can be a source of support for a leader willing to throw out the official history and replace it with something closer to what his or her supporters want to hear. And it gives such leaders another incentive: to justify power grabs as essential to defeating enemies abroad or within.
Viktor Orban, Hungary’s prime minister, for instance, has revised Hungary’s history to that of an innocent victim of Nazis and Communists that was finally made safe by his patriotic guidance. In this way, he champions skepticism toward immigration as a continuation of a great national battle — one that also requires him to suppress rivals, critics and independent institutions.

The most effective propaganda of any sort, research finds, often focuses on an appeal to some group identity like race or religion.
There is a famous experiment: People are given a test, told their score, then asked to rate the test’s objectivity. People told that they have performed well tend to call the test fair and rigorous. Those told that they have scored poorly are more likely to see the test as biased or inaccurate.
Historical revisionism plays on this same impulse, telling people that the established record is an attack on their identity, like a poor score on a test, so it should be rejected.
“Our youth will be taught to love America,” Trump said in announcing a commission to “restore patriotic education to our schools” in 2020. His goal, he said, was to counter “left-wing indoctrination.”
In another example, Christian Americans told that Christianity is under attack, one study found, became likelier to embrace falsehoods about American history and politics in general.
“We want to believe that we are capable and decent, that our friends and favored relatives share these traits, and that the groups we belong to are on the right side of conflicts,” Andrew T. Little, a scholar of propaganda at the University of California, has written.
When people feel that this belief is being challenged — even intelligent, educated people who would otherwise know to reject falsehoods — they will often gratefully accept a version of history that defends it, as well as whatever leader is offering it.
In India, for instance, Prime Minister Narendra Modi has risen partly on a promise to redefine India’s polyglot history as one of rightful Hindu dominance.

For opportunistic leaders, a country’s uglier moments of history are not a problem to solve; they are a gift. A discomforting truth that citizens might prefer to forget or, better yet, replace gives them an opening to impose their own narrative.
Social media, initially seen as a force for liberation, is likely to help that process, enabling citizens to circumvent traditional media for a crowdsourced version of the truth that most appeals to their emotions.
Rising nationalism has contributed, too, increasing appetites for stories portraying one’s country as righteous and pure.
Poland’s nationalist government in 2018 passed legislation making it a crime to suggest that Poland bore any responsibility for Nazi atrocities on its soil. The law was framed not as suppressing memories but as protecting an identity of unblemished national heroism whose accuracy was almost beside the point.
Social polarization has deepened those appetites even further. As more people feel that their in-group is locked in a battle for racial or partisan dominance, they grow more receptive to versions of history that say they should and will prevail.
These revisions, Little said, often look more like reframing history than rewriting it.
In the Netherlands, for example, the Dutch far-right has risen by repositioning Dutch history as a great conflict between Christianity and Islam. Although few historians would accept this portrayal, it has been a factor in those parties’ growth.
Even China’s ruling party, with all its power to manufacture facts, puts growing emphasis on matters of interpretation — playing up the unbroken heroism of its leaders — to real effect. In 2019 alone, “red” museums and memorials, aggrandizing Communist Party history, drew 1.4 billion visits, making them among the most popular destinations in the world.
For all the warnings from 20th-century writers like George Orwell that history would be forcibly stamped out, the graver threat may be that people, offered a choice, turn their backs on it voluntarily.