Pierre Cardin, designer to the famous and merchant to the masses, dies at 98

He dressed the famous, but he was also a licensing pioneer, a merchant to the general public with his name on a cornucopia of products 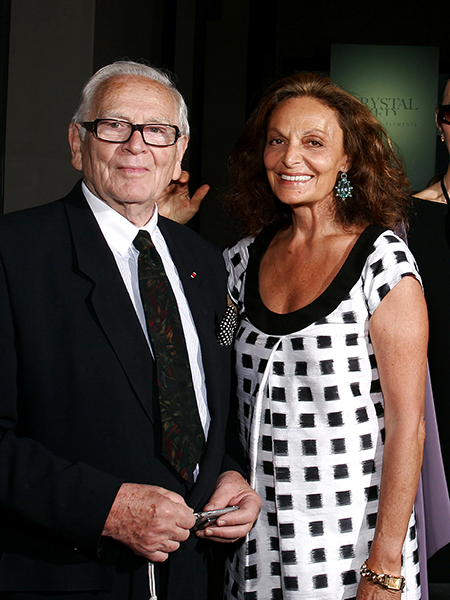 Pierre Cardin with Diane von Furstenberg during an event at the Rockerfeller Center in New York on June 3, 2007. Cardin, the visionary designer and licensing pioneer who invented the business of fashion as it is conducted today, has died in France. He was 98.
Image: Joe Fornabaio/The New York Times

Pierre Cardin, the visionary designer who clothed the elite but also transformed the business of fashion, reaching the masses by affixing his name to an outpouring of merchandise ranging from off-the-rack apparel to bath towels, died on Tuesday in Neuilly-sur-Seine, just outside Paris. He was 98. His death, at the American Hospital there, was confirmed Tuesday by the French Academy of Fine Arts. No cause was given. “Fashion is not enough,” Cardin once told Eugenia Sheppard, the American newspaper columnist and fashion critic. “I don’t want to be just a designer.” He dressed the famous — artists, political luminaries, tastemakers and members of the haute bourgeoisie — but he was also a licensing pioneer, a merchant to the general public with his name on a cornucopia of products. There were bubble dresses and aviator jumpsuits, fragrances and automobiles, ashtrays and even pickle jars. He turned France’s fashion establishment on its head, reproducing fashions for mass, ready-to-wear consumption and dealing a blow to the elitism that had governed the Parisian couture. In a career of more than three-quarters of a century, Cardin remained a futurist. As the space age dawned, Cardin dressed men, and women, in spacesuits. In 1969, NASA commissioned him to create an interpretation of a spacesuit, a signal inspiration in his later work. “The dresses I prefer,” he said at the time, “are those I invent for a life that does not yet exist.” His designs were influenced by geometric shapes, often rendered in fabrics like silver foil, paper and brightly colored vinyl. His men’s ready-to-wear designs, introduced in 1960, were decidedly more faithful to the body’s outlines. Built on narrow shoulders, high armholes and a fitted waist, they were streamlined and somewhat severe, dispensing in some cases with traditional collars in favor of the simple banded Nehru, a namesake adaptation of the style worn by the Indian prime minister. Those suits were slow to catch on in the United States — until the Beatles appeared in knockoff versions on the Ed Sullivan television show in 1966. Nehru-mania ensued. Cardin had laid the foundations for a global empire by the late 1950s, bringing his designs to Moscow, Tokyo and Beijing. He relished his role as the overseer of a realm that encompassed clothing accessories, furniture, household products and fragrances sold through some 800 licensees in more than 140 countries on five continents. “I wash with my own soap,” he once boasted. “I wear my own perfume, go to bed with my own sheets, have my own food products. I live on me.” In 1981 he bought Maxim’s, once the world’s most famous restaurant, a landmark of the belle époque on the Rue Royale in Paris. Two years later, as part of an international expansion, Maxim’s opened its first branch in Beijing. Pietro Costante Cardin was born July 7, 1922, in San Biagio di Callalta, Italy, near Venice, where his parents were vacationing. He grew up in Saint-Étienne, in east-central France, where his father was a wine merchant. Cardin first dreamed of acting, but was later drawn to designing costumes and sets for the stage. In 1936, he left for Vichy. By 14, he was assisting a local tailor named Manby. At 17, World War II erupted, and he enlisted. During the war he took an administrative position in the French Red Cross. He returned to Paris in 1945 and apprenticed at several prominent fashion houses. Toward the end of his couture apprenticeship, he founded his own fashion house. His first collection for the House of Cardin, established in 1950, featured suits and coats modeled in heavyweight wool with emphatic details and the geometric shapes and cutouts that were to become hallmarks of his collections. He forsook his hard-edge aesthetic for a time in the 1970s, incorporating draped fabrics, pleating, quilting and asymmetrical collars and hems into his designs. His couture collection of 1986 featured entire dresses made from billowing scarves. Cardin lived to see his fashions reappraised. His collections served as the inspiration for designers like Gareth Pugh, Simon Porte Jacquemus, and to some degree, Karl Lagerfeld at Chanel. That he remained a force in the 21st century was attested to by Lady Gaga, who once wore one of his metallic chain-mail creations on the concert stage.

Tweets by @forbesindia
Chinmay Tumbe: Why pandemics, economics and politics will always be inter-connected
China has all it needs to vaccinate millions, except proof its vaccines work