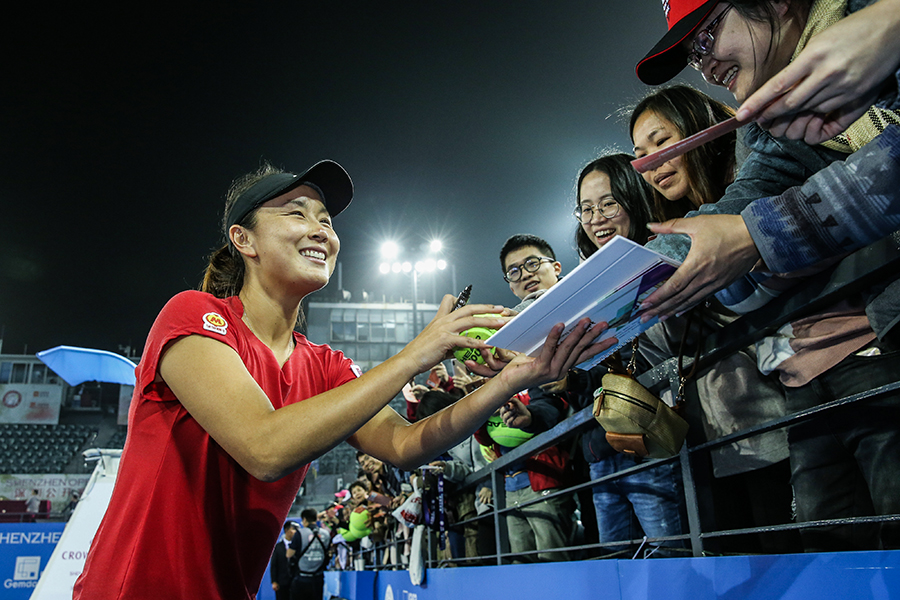 Julien Chen was getting ready for bed when he learned that one of his favorite Chinese tennis players, Peng Shuai, had made #MeToo allegations against a powerful Chinese official.

A friend told him to check Peng’s social media account. “There’s a ‘huge melon’ in the tennis circle,” the friend wrote, using the Chinese metaphor for a bombshell.

Chen could not find anything. He searched the word “tennis,” but Peng — one of China’s most famous athletes — appeared in barely any results. With stunning efficiency, China’s censors had begun scrubbing references to her allegations from the internet.

“All of a sudden, it became a forbidden topic,” Chen said.

Peng is not the first celebrity in China to be almost entirely erased by censors. The country’s online propaganda machine can make just about any story — or person — vanish. Yet her international profile has made the task harder, and China’s attempt to brush her allegations aside has been met with deep criticism around the world.

On Wednesday, the Women’s Tennis Association Tour suspended its future tournaments in the country, prompting China’s Ministry of Foreign Affairs to reiterate that China was “opposed to the politicization of sports.” But Chinese tennis fans are pushing back as well, using subtle, sometimes tongue-in-cheek language to voice their frustration online while trying to outmaneuver censors.

On Chinese social media, there has been little outright discussion about Peng. A popular online tennis fan club in China, a forum called Tennis Post Bar, has not been updated since Nov. 2, the day Peng, a three-time Olympian, publicly made her accusations against Zhang Gaoli, a former vice premier.

To evade the censors, Chinese tennis fans have started to use obscure references to call more attention to Peng’s silence. Instead of identifying her Chinese name and specifying the details of her allegations, some people have used vague references like “a tennis player” and “the spat.”

There was a seemingly unrelated post about art that used the expression “hitting an egg against a rock.” It echoed a line in Peng’s original allegation, in which she wrote that going up against someone as powerful as Zhang was like “hitting a rock with an egg.”

Even state media figures have found themselves challenged by how to discuss Peng without setting off alarms. Commenting on Twitter, which is banned in the country, Hu Xijin, the editor-in-chief of the Chinese Communist Party’s official state newspaper, referred to Peng’s accusations as “the thing people talked about.”

Two weeks into the media blackout, some of the biggest names in tennis began to wonder aloud about Peng’s safety. Chinese state media responded by releasing a flurry of content for international viewers purporting to confirm that she was happy and in no harm. One of the stories managed to reach the domestic audience in China.

It included pictures of Peng signing giant tennis balls for fans at a youth tennis tournament. A post on the verified account of China Open, a professional tennis tournament in Beijing, was shared nearly a thousand times, and caught the attention of exasperated commenters.

“It’s the most reposted youth tournament event post I’ve ever seen in my career,” Zhang Bendou, a veteran tennis expert in China, wrote on Weibo, the Chinese social media platform. Others made more mocking remarks. “Almost everyone is asking ‘where is **’?” one person wrote, leaving Peng’s name out of the comment. “She showed up.”

For Lucy Wang, a dentist and a tennis fan in Beijing who watched one of Peng’s singles matches in person at the China Open in 2017, the photos were enough to put her mind at ease.

“Knowing that she’s back is enough for me,” said Wang, 37. “I have no idea why people outside China are still not satisfied.”

The International Olympic Committee later published a statement and photo of Peng smiling in a live video call with the organization’s president. China, which is set to host the Winter Olympics in February, seized on the moment to complain that most Western media and sports organizations had been biased and dishonest about the case.

On Thursday, the IOC released another statement, saying members of the organization had held a second videoconference with Peng this week, but offered no details about the conversation. It said it was using “quiet diplomacy” with Chinese sports organizations to address the matter.

Steve Simon, CEO of the WTA Tour, has been one of the most outspoken critics of the Chinese authorities, demanding an investigation into the #MeToo allegations. News of the WTA Tour suspension circulated briefly on the Chinese internet Thursday morning.

Some users on Weibo expressed support for the decision before their comments were removed. “This time I’m with the WTA,” one wrote. Another was puzzled by the fact that Zhang had not yet been detained. “He really has very strong backing,” the post said. “Ridiculous.”

Chen is still unsettled by the whole experience and said he was disappointed with the WTA Tour’s announcement Wednesday, saying he prefers to watch female tennis players because he believes women have more diverse skills on the court than men do.

He said he especially loved to watch Peng’s powerful serves, but questioned whether her allegations would ever be investigated in China.

“We know these kinds of things happen and we care about them,” he said. “But most of us choose to remain silent.”

He added: “That’s the reality in China.”

Tweets by @forbesindia
Towards a sui generis cryptomoney regulation system for India
Can Omicron knock a fragile economic recovery off track?