Who on Earth is the Common Man?

He just survived a barrage of election manifestos and innovations in rhetoric. Politicians begged him and ripped their heart out to show his place there. Now they will forget him. Only to remember five years later. It's not easy being a Common Man. But defining him is even tougher

The Congress Party has come a long way from the Indira Gandhi era, when Aam
Aadmi meant a member of the weaker sections of the society: Dalits, tribals and so on. Under Dr. Manmohan Singh, the Common Man represents anybody who is below upper middle class. In a market economy, he must be cared for by both the government and the private sector.

Common Woman, Anyone?
Th e phrase “common man” is disgustingly gender-biased, says peace activist Achin Vanaik. It is also open to interpretation like the term “national interest”, he says. Perhaps, the only common thing about all these interpretations is a very tacit conception of what it means to be a political person. ‘Special’ man as against common’ man. 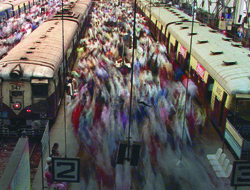 Image: Reuters
Who are we in the political tug of war?
Working to Live
The Common Man represents the toiling masses of this country, says the CPI (M).
These are the people who have no source of income except their labour. Broadly, all those with income or standard of living below the national average are the Common Man.Fuzzy Logic
Ask Pratap Bhanu Mehta of the Centre for Policy Research and he says the defi nition is not really clear. “It’s a rhetorical invocation and has been kept vague precisely so that most people feel part of it.” But then, he also says that an all-inclusive definition is OK, because policies should not be confined to small numbers.
Shock Sensitive
The BJP says the Common Man is one who is not economically well off and is affected by even a slight change in prices. He doesn’t have access to good education, health and other such necessities. Nor does he have the money to pay for them.

Twenty20
Four out of five Indians live on less than Rs. 20 per day. Those are the common people, says N.R. Bhanumurthy, associate professor, Institute of Economic Growth. Citing the Arjun Sengupta Committee report on the unorganized sector, he says this definition goes beyond the official definition and is more accurate.

Tweets by @forbesindia
Bretton Woods III?
The Audacity of Hope