Secretive sports car maker Ferrari opens up to Stefan Thomke about how it has bucked industry trends to achieve success. 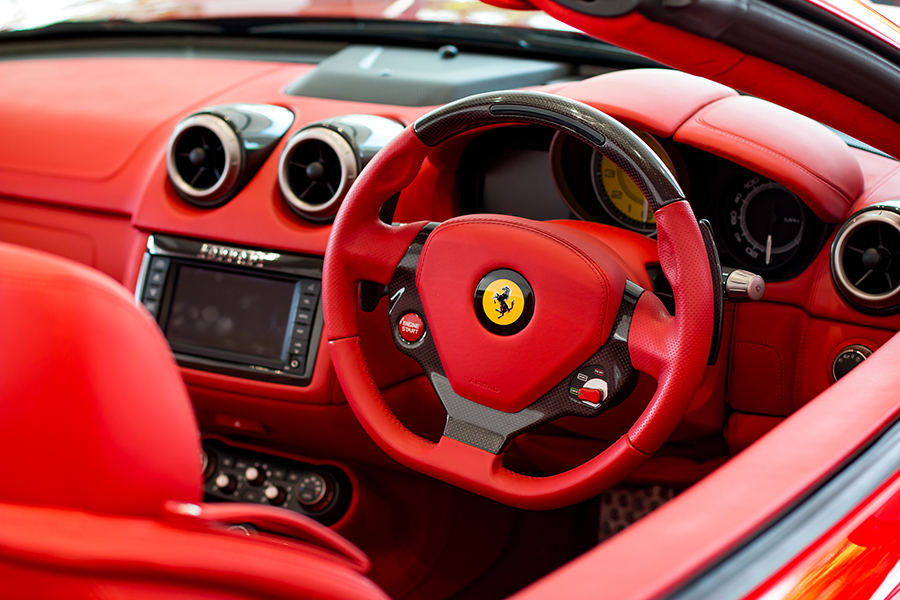 “If you drive a Ferrari, you put premium petrol in the tank, you hit the motorway, and you step on the gas.” —Soccer star Zlatan Ibrahimovic

That purring engine. The buttery soft leather. Those sleek curves. The essence of a Ferrari transcends any one particular design element to immerse its drivers in pure, unadulterated pleasure.

“The overarching goal is to create an experience—a sensual experience,” says Harvard Business School Professor Stefan Thomke, who wrote a case study about the company in 2018.

While many companies talk about creating a customer experience through their products, Ferrari N.V. is one of the rare brands that unequivocally achieves it—making its iconic horse logo synonymous with luxury and excitement. Thomke, the William Barclay Harding Professor of Business Administration, thinks of a student he taught in Harvard’s senior executive program in Dubai, who had the opportunity to test drive one of Ferrari’s cars.

“He drove it for a few hours and couldn’t sleep that night.”

Despite its legendary success at defining its brand, it is also a company confronting modern realities. After nearly 80 years of operating as a privately owned company, Ferrari went public in 2015 (ticker symbol RACE). Meanwhile, the automotive industry has been shifting through its biggest changes in decades, with companies scrambling to keep up with the pace of innovation—including drivetrain electrification, wireless connectivity, and self-driving features.

Some of Ferrari’s competitors, including Porsche and Lamborghini, responded by adding cutting-edge technologies, increasing production, and venturing into untraditional models, such as (gasp!) sport utility vehicles. Ferrari so far has remained true to its fewer frills, more fun legacy.

When Thomke, who teaches and writes about the management of innovation, received an email from Ferrari out of the blue asking if he wanted to study the company, he couldn’t resist the opportunity. “It’s perhaps one of the best-known and secretive companies in the world,” he says. “I wanted to lift the veil and see how they work.”

The Ferrari Way
What he found is something he termed "The Ferrari Way" after an offhand comment from the company’s chief test driver. “I don’t know what technologies we will use in the future,” the driver said. “But I do know that any new technology will be deployed in our car the Ferrari way.”

In practice, that means a careful balancing of three elements: driving pleasure, performance, and style. As the company’s marketing head told Thomke, “We are not the fastest or most comfortable car on the market, but the best combination of the two, which makes us the most thrilling. Our concept of performance includes pleasure.”

While other sports car manufacturers try to make their cars as light as possible to aid acceleration, for example, Ferrari is not afraid to sacrifice speed for a more luxurious cockpit. “They are willing to put on a few extra pounds because the leather feels different,” says Thomke.

That goes for the car’s exterior style as well. In one case, the company increased the width of the wheelbase, diminishing the car’s performance slightly, to make it look better. As the head of design told Thomke: “Form follows function, but there is always a large margin for artistic freedom. The difference between an efficient shape and a beautiful and efficient shape can be quite large.”

Then there is that trademark Ferrari purr. The company has gone far beyond other car makers in creating an engine that not only performs well but sounds great to the driver.

“They go crazy trying to make a turbo engine sound good,” Thomke says. “Most manufacturers wouldn’t bother. It’s too much effort to find that perfect compromise.”

A strategy of scarcity
All of these elements have made Ferrari a hot commodity among high-net-worth buyers. At the same time that competitors have increased production, Ferrari has intentionally limited production to create scarcity, something Thomke calls “deprivation marketing.” The company runs waiting lists for its most sought-after models, and rewards longtime loyal customers with first chance to buy limited edition cars.

On the surface, that scarcity-generates-demand model seems destined to clash with becoming a public company. Ferrari decided to go public, in part, to improve its management rigor, Thomke says.

“Quite honestly, the company was run in a more casual way, with a great deal of informality,” he says. Being accountable to shareholders caused Ferrari to have to get serious about setting performance targets and professionalizing its organizational chart.

The danger is that in an increased rush for profits to satisfy shareholders, the company could abandon the principles that made it successful. So far, Ferrari has resisted that urge—and continued to produce cars at a level below demand.

“If anyone can walk into a dealership and get one, then it loses what makes it special,” Thomke says. “For the model to work, you have to keep prices up.”

The company has also bucked industry trends by moving deliberately on adding technologies to its cars. While it has installed hybrid drivetrains to some of its newer models, it has eschewed connectivity and self-driving features in favor of focusing on core elements, such as more powerful engines. The decision seems to be working, Thomke says, with profits up 46 percent last year.

“At the end of the day, what matters is results, and they are outperforming their peer group.”

“When industries undergo technological change, many executives worry they are not reacting quickly enough, or they are underresponding,” Thomke says. It can be just as dangerous to over-respond, to change merely to keep up with competitors.

The first question companies should ask when evaluating new technology is whether it has staying power. “You have to get a good sense of the trajectory and if it’s ready for prime time,” Thomke says. Equally important is whether it fits in with how a company creates and captures value. “If you change your whole value system [to use it], and the technology turns out to be a dud, you put your whole company at risk.”

In Ferrari’s case, that means sticking to its three core elements of the Ferrari Way: pleasure, performance, and style—leaving some bells and whistles to other carmakers.

“The whole value system breaks down if it’s not fun to drive anymore, if it doesn’t look great, or if it doesn’t give you great performance,” Thomke says. “If the emotional experience goes away, none of those other things matter.”