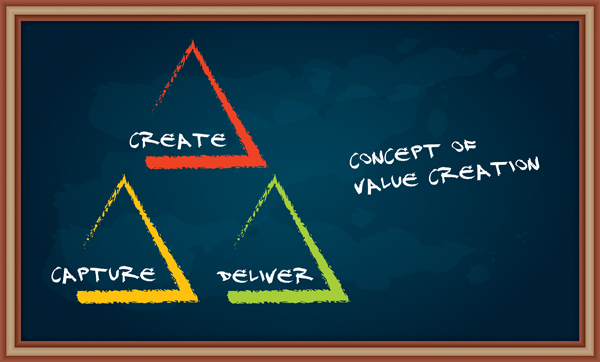 As a young teacher at Harvard Business School, Brian J. Hall called on longtime professor James Cash for a favor: Hall wanted to study the inner workings of General Electric, and he needed Cash's help to get in touch with top-level executives who could provide insights for his research.

Later, Hall asked how he could pay back the favor. Cash put his arm around his colleague's shoulder and said, "You don't owe me anything, Brian. This is the way we do things here. Just pay it forward."


"I will never forget that," says Hall, now the Albert H. Gordon Professor of Business Administration. "That had such a huge influence on me."

It's an example of what Hall calls "value-creating" behavior—doing a favor for the good of the organization without expecting anything in return.

"Business is a team sport. It's soccer, not golf. Nobody plays by themselves and wins in business," Hall said during a seminar on value creation versus "value claiming" held at Alghanim Industries, one of the largest multibusiness companies in the Middle East. Hall previously served as EVP and then interim CEO of the company, and is now an adviser.

"You will never succeed until you become a good team player, somebody who thinks about other people and checks their motivations at the door."

MORE PIE FOR EVERYONE
In general, value creators work cooperatively with others to make the corporate pie bigger for all, whereas value claimers focus on taking more of the pie for themselves—like a thief steals for personal gain.

The business world is filled with value claimers, and this all-for-me attitude becomes apparent in a variety of ways.

For example, during internal corporate budget disputes, some executives focus only on their own needs without considering the requirements of other departments or individuals.

And then there are workers who hoard information like gold, believing that guarding certain company know-how gives them more power. Rather than sharing customer lists that might give another department a hand in making sales, for instance, they squirrel those names away. Some find more subtle ways to keep others out of the loop, like failing to copy certain colleagues on pertinent emails.

"People want to increase their power by keeping that information confidential," Hall says. "But you have to make sure you cc the right people. It's important to keep in mind which people need the information in order [for them] to do their job better."

A BAD HABIT
Most people don't look to become value claimers, but rather just fall into it as a way of protecting their own corporate turf, Hall contends. Eventually, it ends up becoming a habit that sticks. The instinct to claim is strong, so everybody will naturally be a little bit both a value claimer and a value creator.

But an executive can actively choose to be a value creator, someone who always looks for the "win-win," leaving enough room for both sides to benefit from a deal without feeling the need to swipe every last penny.

"Sometimes you have to give up something you want. It's a very hard thing to do, and no one is ever going to be perfect at it," Hall says. "But if you make it your goal to be a value creator, then it becomes an instinct, it becomes the lens you have on things, and it becomes easier. It's clarifying, and if you can focus on that, it is the way to win."

One way to be a good value creator: give coworkers credit where credit is due. The need to appear smart can lead managers to cast blame on others for missteps or to claim an employee's idea as their own when speaking before their bosses or boards—the kind of thing that can be terribly demotivating to the person who had the idea.

"It's a tragedy when that happens," Hall said. "Somebody is trying to claim value, but in doing so, the person has destroyed value for the company by demotivating an employee. Everybody loses." Having a staff member receive credit for good ideas not only makes the employee feel valued and motivates him or her to come up with better ideas in the future, but also makes the leader look good.

The purpose of business is simple and well-defined, Hall says: It's to make the world a better place, to create value. After all, companies that make their purpose just about profit often do poorly because both their customers and their employees sense this quest for the almighty dollar, which makes them feel as if they are being squeezed rather than served.

"Shareholder value or profits are measures, not goals in and of themselves," Hall says. "It's hard to wake up in the morning and get excited about creating shareholder value. The way to be a successful company is to think, How do we produce this at better costs, or how do we make this more valuable for our customers? The profits follow from that."
THE ROOT OF ALL SCANDALS
In 2008, greedy bankers became high-profile value claimers and nearly took the entire world into a depression, Hall says. They were slapped with tighter financial regulations as a result.

"Every scandal is the result of someone trying to claim value at the expense of others. You have the license to be a bank because you're supposed to make the world a better place. Instead, when a group of banks makes very poor decisions, all because individuals were doing something that was better for them, bad things happen and society changes the rules on them. They lose in the long run."

During the seminar, Hall outlined three reasons executives should give great consideration to becoming value creators:

What goes around comes around. Executives shouldn't look to create value only because they hope to receive a favor or other reward in return.

But when you extend yourself in a way that creates value for a coworker and for the company as a whole, many times a good portion of the pie will come back to you. Rewards, in the form of greater compensation, promotions, or other benefits, are often dealt to those who create value in their companies.

It's the safest route. It may feel risky to give others credit—particularly when you may be worried that no one will do the same for you—but you will actually feel safer and less anxious by doing the right thing.

"I've never been a bank robber, but I can imagine it's an anxious way to live. You know what you're doing isn't right and you might get caught," Hall said. "There are lesser versions of that in companies. People know the reason they get by is that they're very good at protecting their turf and getting their piece of the pie, rather than someone knowing they are very good at what they do and are creating value. This creates very different levels of anxiety. It's much safer to be a team player."

Others will like you, and ultimately you'll be happier. People who are bad sports in the business world stand out.

When Hall gives his talk to managers and executives and asks them to think about people in their organizations on the two ends of the spectrum—value claimers versus value creators—they generally have no trouble visualizing them right away.

"What does that tell you? What we all know is that people develop reputations," Hall said. "When you're a non-team player and it's all about you, it becomes obvious. People are not very self-aware about how transparent it is. But if you think you're getting away with it, you're not. People know."

And if you're not well liked and respected, quite simply it's hard to be happy, Hall believes. During the seminar, Hall gave the example of a coworker who was a big value claimer, starting every sentence with "I" and always making everything about him. He was a lonely guy. Nobody liked him, and when he left the company, nobody shed a tear.

"If you don't have that, it's impossible to be happy."

Tweets by @forbesindia
The Value of Authenticity
How to Multiply Talent