Bad bosses are generally more inept than they are evil, and often aren't purposefully bad

On film, few characters are more obviously villainous than the extremely bad boss. There's Star Wars' Darth Vader (who manages a disrespectful underling by strangling him with his mind), Katharine Parker in Working Girl (who shamelessly steals ideas from the movie's hero), John Milton in The Devil's Advocate (who is literally the devil incarnate), the eponymous villains in the recent hit Horrible Bosses (whose infractions include cocaine abuse and sexual harassment) …the list goes on and on.

Reality is more nebulous, of course. Bad bosses are generally more inept than they are evil, and often aren't purposefully bad, says Harvard Business School Professor Rosabeth Moss Kanter, who has authored several business management books, including Confidence: How Winning and Losing Streaks Begin and End and SuperCorp: How Vanguard Companies Create Innovation, Profits, Growth, and Social Good "What's horrible is often in the eye of the beholder," she says. "There are many people who complain about their bosses without taking a look at themselves, and vice versa." 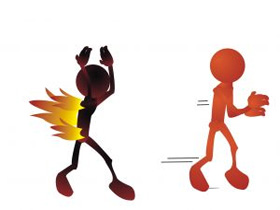 Kanter recently sat down with HBS Working Knowledge to discuss some of the factors that create bad bosses—and what employees can do to resist them. As she states in a recent column in Harvard Business Review, "The best cure for horrible bosses is wonderful colleagues."

Bad boss behavior #1: failure to communicate. At any level of management, it's important that bosses effectively communicate company or team goals from the get-go. "Empowerment can happen only when there's a consensus on goals and an agreement that certain standards have to be met," Kanter says. "If there isn't agreement in the beginning, that's when certain situations start to unravel."

But problems arise when bosses fail to realize that they're not communicating clearly. Kanter cites an old joke as an example:

A man drives to a gas station to fill up his tank, and the attendant can't help noticing that there's a penguin in the backseat of the car. "Yes," the man says. "I found him there this morning, and I don't know what to do with him." The attendant suggests that the man take the penguin to the zoo right away, and the man agrees that this is an excellent idea. But the next day, when the man returns to the same gas station, the clerk notices that the penguin is still in the backseat of the car—only this time it's wearing sunglasses. "Hey," the clerk says. "I thought I told you to take the penguin to the zoo." The man nods and says, "I did take him to the zoo. He had such a great time that I decided to take him to the beach, too!"

Miscommunication often leads to situations in which bosses throw up their hands in frustration, believing that their employees are incapable of delivering good ideas, when in fact the problem is that the employees just aren't clear on the mission.

"Sometimes [bosses] have it in their head that they know what they're driving at, but they don't always bother to tell everyone what's in their head, and if they do, the translation is not always clear," Kanter says. "So CEOs make speeches all the time and think everyone is interpreting their words in the exact same way, and they're not. And they're surprised later to find out that what they thought was going to happen didn't exactly happen. Constant, consistent communication is important."

Bad boss behavior #2: pigeonholing. Another common bad-boss trait is the inability to accept the idea that employees' skills and talents probably exceed their job descriptions. Not only is this attitude demoralizing for employees, but it discourages collaboration and idea sharing as well. For example, "there was one CEO of a company in the IT industry who kept everyone on his executive team confined to narrow little boxes," Kanter says. "One member of the team had actually built several successful IT companies and so knew a lot about marketing. But because he had been hired for a technology job, the CEO would listen to him only on technology matters."

Bad boss behavior #3: inability to zoom in and out. Kanter also stresses the importance of zooming—the ability to view the world through an adjustable lens as the situation demands, examining particular details in certain situations and maintaining a broad view of the mission in others. Talented bosses know how and when to adjust their lenses. But for those who can't or won't adjust, staying stuck on zoomed out is the lesser of two evils, Kanter says.

"If I had to choose between getting too close to the details or getting too far out and losing the situation in the clouds, I would always go for zooming out," Kanter says. "If employees are forced to stay too focused on the details, without thorough preparation, without clear goals, without a larger vision, without a sense of purpose, then they are left to be dependent on the daily moods or whims of a boss. Bosses who spend too much time zooming in on the details are more likely to lose sight of the big picture and the goals."

In those cases, Kanter says, it's up to the employees to keep each other on track.
Working around a bad-boss roadblock

In situations where the boss is obviously impeding progress or morale, Kanter recommends that employees try to mobilize their peers to create a course of action. She acknowledges that this is easier said than done, especially when a bad boss has created a culture of fear. But teaming up to effect change need not require a palace coup.

"If you test the waters in very small and diplomatic ways, you're more likely to get a hearing at higher levels when you come with a constructive solution—not one that is a demand, but rather one that has alternatives and options associated with it," she says. "Self-organizing is the new mode for getting things done in companies. Yes, you have a set area of responsibility in your job, but you also have the ability to see an issue or a problem, to find a few other people who see the issue or problem, and to try to find a constructive solution. If you start small, then you can overcome the courage gap. People are timid and scared that people are too set in their ways. But in fact the boss may not be sure what the solution should be and is just waiting for someone to come forward."

In her classes, Kanter teaches the case of the upscale cookware retailer Williams-Sonoma, where the CEO repeatedly eschewed the idea of online sales. He wasn't a terrible boss, but he didn't use computers himself and didn't see the value in the strategy. So a group of self-starters went ahead and designed a small, low-risk e-commerce pilot anyway. It tested well, the CEO was at last impressed, and the project moved forward. "Williams-Sonoma ended up with one of the best e-commerce sites on the web in the early years of e-commerce," she says. "And it was a small group of believers that made that happen."