The banks may be the face but AGSTT is the muscle behind at least 25,000 ATMs in India 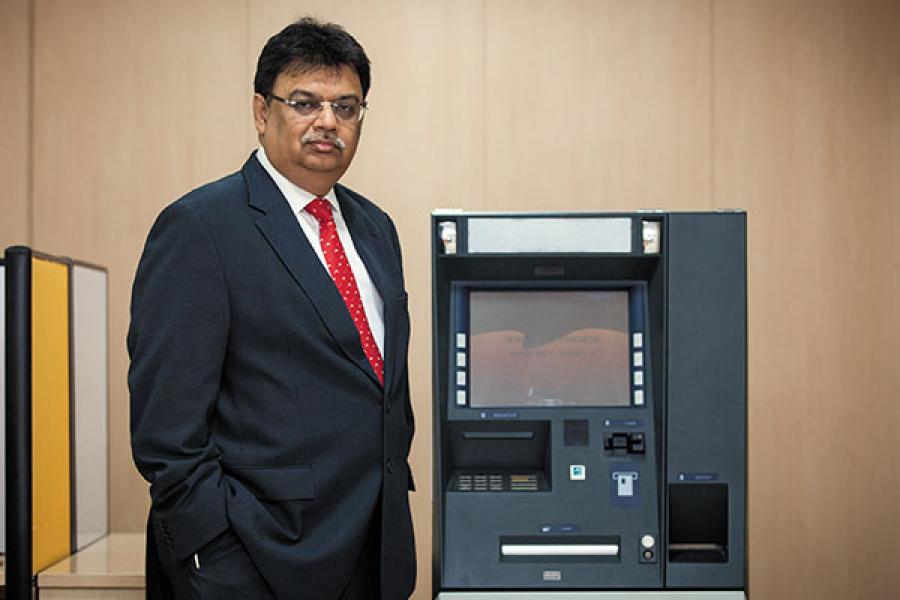 AGS Transact Technologies (AGSTT), the brainchild of Ravi Goyal, is the leading provider of touch point technology solutions to the banking industry. It derives 70 percent of its turnover from the supply and maintenance of ATMs for banks. The remaining 30 percent is generated by providing similar dispensing technology solutions to the petroleum, retail and paints industries.

It operates on an outsourced transaction-based model where the machines are built and maintained by the company instead of the bank. Or, simply put, AGSTT takes care of leasing, building and managing the cash lifecycle of the ATMs, and charges the bank based on the transactions that take place on the machines.

AGSTT began by providing colour-matching solutions to the textile industry. It expanded the same concept to paints where manufacturers use dispensing machines at the retail level to mix and match colours for their final customers. For the retail industry, it provides point-of-sale hardware as well as software products which offer billing and check-out solutions to major players like the Tatas, the Aditya Birla Group and Reliance Industries. For petroleum stations, AGSTT’s products handle wet stock management which includes payments by customers.

The Man Behind It
Chairman and Managing Director Ravi Goyal joined DCM Computers in 1983 as a service engineer. In 1992, he decided to start his own company, Advanced Graphic System (AGS), to market textile designing software for Computer Design, a US-based company. By 1999, he was clear that he wanted to operate in a niche sector where competition is limited. He zeroed in on colour-matching systems based on computer applications for the paints industry. In 2002, he started AGSTT, separate from the existing AGS that continues to be owned by Goyal.

He had figured that industries like automobile paints and decorative paints were looking for solutions in the colour dispensing space. And, over a period of time, Goyal got a strong hold on various dispensing technologies, including that for the textile industry.

He then became curious about cash dispensing technology. He felt there was a future there and started to search for opportunities. Goyal’s problem, though, was that he did not have a background in banking. And that industry was going to be his key customer. Also, banks look for vendors who understand hardcore technology and AGSTT was more into the solutions side of the business. In 2004-05, Goyal finally got a foothold in the space. He tied up with Wincor Nixdorf, the third largest ATM provider in the world and gradually started with the small staging and assembling of the machines. 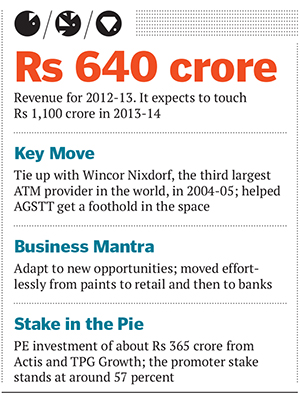 Why It Is A Gem
To streamline the revenues, AGSTT is trying to create a business model that will work on an annuity principle where a fee will be charged on a regular basis, according to a per transaction pricing model. Since all its verticals are growing at a steady pace and, in general, the business of banking as well as the other industries it caters to are expected to expand, AGSTT is sitting on solid ground.

Actis and TPG Growth are the two big private equity investors in AGSTT, having put in around Rs 365 crore. They were attracted to the company because it is a market leader in both outsourced ATM and retail automated solutions.

Why It Was Hidden
The nature of AGSTT’s business has been such that it never needed to advertise to the end user. For instance, as far as ATMs go, its customers are banks, not individuals. But things are expected to change. The Reserve Bank of India had, in 2012, approved of white label ATMs—those that are set up, owned and operated by non-bank entities. AGSTT is one of the few companies that has got an in-principle approval and plans to set up around 5,000 white label ATMs.

These will not belong to any bank but will be available for use to any user who will be charged a fee when s/he conducts more than five transactions in a month.

Today, 75 percent of the ATMs are located in tier I and II towns. The next wave is expected to include tier III and rural areas. That is where white label ATMs can make a dent.

Risks and Challenges
The company operates in a competitive market where there are no entry barriers. While big groups like the Tatas have already started installing their white label ATMs, AGSTT is still at the approval stage. This might affect its ability to compete, as it will not have the early mover advantage.

Also, it is on expansion mode and will be using significant capital in the buying and deploying of ATMs. In the initial years, therefore, the return on equity may suffer.

Tweets by @forbesindia
SRL Ltd: Taking Diagnostics to Every Indian District
Fashion Weeks: Behind the Glam