With a focus on credibility and scale, the company is the clear industry leader 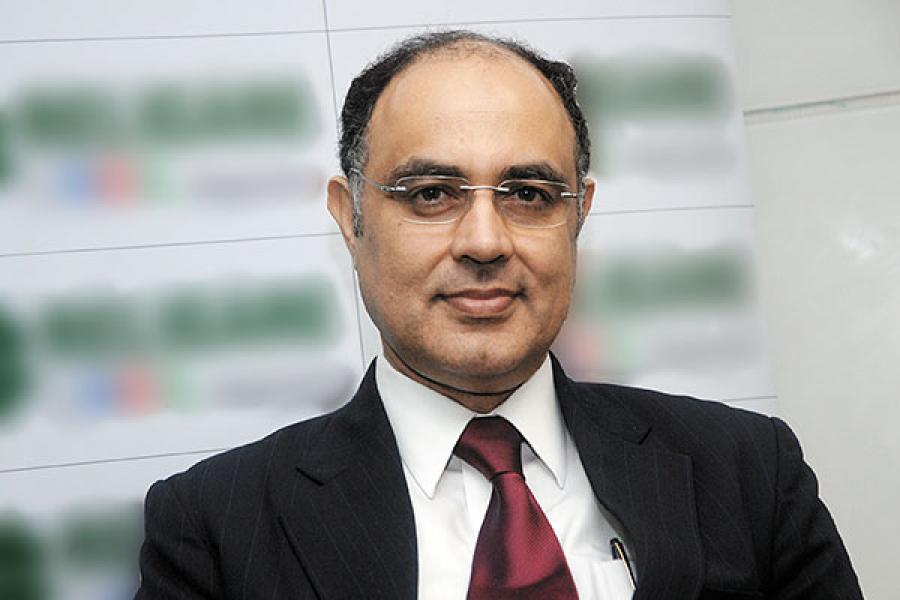 Sanjeev Chaudhry, MD, SRL, wants to change the perception about misdiagnosis that hounds the diagnostics sector

Having successfully overtaken the competition in the last seven years, SRL Ltd stands as the largest player in the $1.8 billion Indian diagnostics industry. From a top line of Rs 70 crore and a network of fewer than 20 labs in 2006, the company expects to touch Rs 700 crore in revenue at the end of this financial year. It also boasts the biggest infrastructure, which includes 4,000 collection points, 230 network labs and 12 large reference labs. “We are the only company who can claim to cover each of the nearly 700 districts in India. We can take a sample from anywhere in the country to one of our labs within six hours,” says Sanjeev Chaudhry, MD, SRL.

The growth has been fast and aggressive. In 2010, the company paid Rs 600 crore for the Ajay Piramal-owned Piramal Diagnostics, making it the biggest acquisition in the sector. This helped SRL extend its reach to the southern and western markets of the country. Piramal Diagnostics also brought in the largest radiology network in India, which was missing in SRL’s portfolio.

Not surprisingly, the company has caught the eyes of investors. “In all these years, they have been profitable quarter-on-quarter,” says Srinivas Chidambaram, managing director at private equity firm Jacob Ballas Capital India Pvt Ltd. The firm, which has a portfolio worth $600 million, invested in SRL in 2012, buying a 16 percent stake for Rs 250 crore. International Finance Corporation, Avigo Capital Partners and Sabre Partners have also bought a stake in SRL (which is a unit of Fortis Healthcare promoted by billionaire brothers Malvinder and Shivinder Singh).

THE people BEHIND IT
Chaudhry, who joined SRL in 2006 after a long stint at multinational Dupont, narrates this story to showcase the state of Indian health care. “Once, while sending a set of blood samples for testing, a doctor also included a ‘sample’ of red ink. He wanted to verify the lab’s quality. To his surprise, the ‘result’ said that the ink had characters of a thyroid problem.”

Misdiagnosis like this is rampant in the diagnostics industry, 90 percent of which comprises mom-and-pop labs that dot neighbourhoods. Chaudhry wants to change this perception by increasing awareness through the company’s network of close to one lakh doctors.

Meanwhile, Sanjeev Vashishta, who moved from parent company Fortis Healthcare to become SRL’s CEO last year, says that over the next two years, they plan to double volumes with the present capacity. “Scale will help us benefit from better bargaining power when it comes to sourcing consumables and logistics,” he adds. 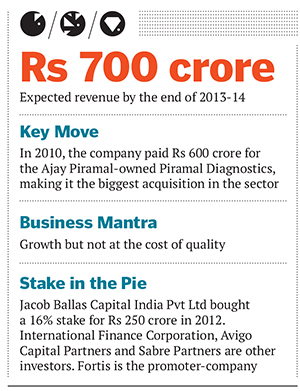 WHY IT IS A GEM
Apart from its geographical reach, SRL Diagnostics also scores on volumes. It conducts close to one lakh tests every day and has built the capacity to expand this figure to 2.5 lakh, which will make it bigger than American giants like Quest. But that will also put the efficiency of its hub and spoke model to test. Currently, each collection centre is connected to a network lab which, in turn, is linked to a reference lab.

The company has also diversified into wellness. “Only about 10 percent of the population might be ’unwell’ but does that mean the balance 90 percent don’t need medical attention?” asks Chaudhry. Their 20 wellness centres, which focus on preventive health care, also double as pathology labs. And, as it is in developed markets, the trend will be towards more esoteric tests (the analysis of ‘rare’ substances or molecules that are not performed in a routine clinical lab) which have bigger ticket sizes, says Dr Rana Mehta, executive director, PricewaterhouseCoopers Private.

Chaudhry is certain that SRL, which has the capability to conduct up to 5,000 such tests, is well-placed to profit from this. “We are the only company in the sector to have our own R&D which enables us to customise tests to local needs,” he adds.

WHY IT WAS HIDDEN
Despite its success, SRL’s lack of visibility can be directly traced to the industry it belongs to. Diagnostics accounts for three percent of the $60 billion health care sector in India. Hence, it tends to fly below the media radar.

It also doesn’t help that the industry has credibility concerns. Consider that with no entry barriers and almost no accreditation needed, anyone can open a pathology shop, of which there are nearly 50,000 across India. Of this, only about 1,000 are of any credible standard, according to industry analysts (SRL claims to own at least a quarter of these). And then consider that diagnostics influences 80 percent of medical decisions that are made.

“Also, in India, the customers are extremely price sensitive. For instance, in the government sector, one can check for insulin levels for as low as Rs 5. But even a vacutainer, a blood collection tube, costs more than that. Quality, therefore, becomes a major victim,” says Dr Mehta.  These factors make the sector fragmented and also limit its ability to scale up.

RISKS AND CHALLENGES
While building scale, Chaudhry and his team also want to retain quality. This translates into high costs they are not entirely able to pass on to customers. And this hurts profitability.

Chidambaram points out: “Their margins may not be the highest in the sector today, but that is a function of the investments they have done in the last few years. As the utilisation of their capacity increases in the coming years, the margins will also improve.”