Ratnakar Bank: Kolhapur's Local Lender is Among India's Top Ones

A change in leadership put the company on a firm growth path. Today, it’s among India’s top private sector banks 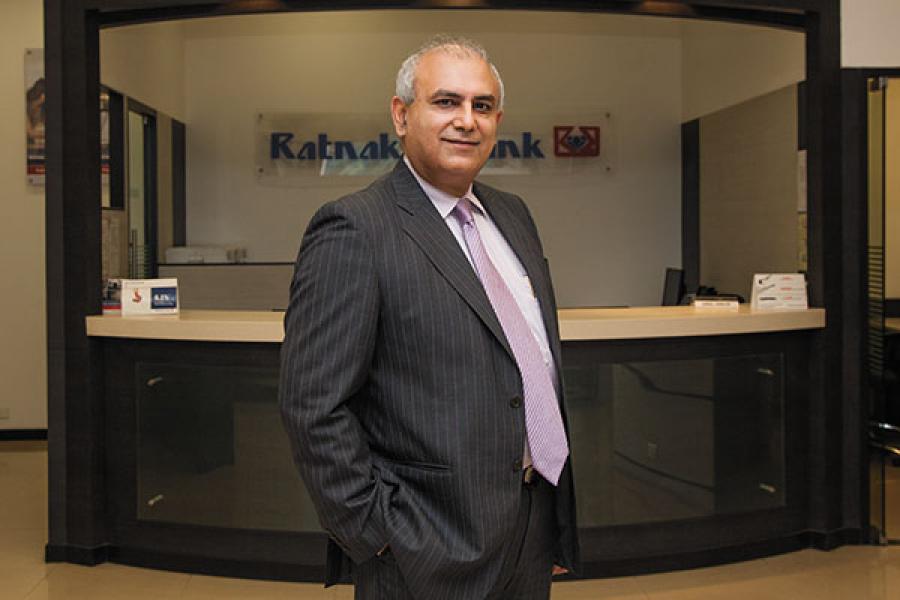 Kolhapur-based Ratnakar Bank had been operating as a local lender for seven decades. With a solid standing in the community, it rarely found the need to step outside its comfort zone. All that changed in 2010 when Vishwavir Ahuja and his team entered the bank with the goal of putting it on a firm growth path. Ahuja had taken this on as an entrepreneurial challenge: His aim was to build a professional organisation with high standards of risk management and corporate governance.

Ahuja acknowledges that, initially, there was resistance from the old guard who weren’t used to the cut-throat nature of the new-age banking world. For instance, employees who never had to go out and solicit business were now being asked to do just that. But three years after the transformation process started, the growth is self-evident. The bank’s deposits are up to Rs 8,340 crore in 2012-13 from Rs 1,585 crore in 2009-10. In the same period, net profit has more than quadrupled from Rs 19 crore to Rs 92 crore.

The man behind it
Ratnakar Bank’s transformation can be credited to its chief executive officer and managing director Ahuja. He held similar positions at Bank of America (for the Indian subcontinent), before he joined Ratnakar Bank as a director in February 2010 and took over as CEO in June 2010.

During Ahuja’s tenure at Bank of America, revenues had grown at 45 percent every year. His tenure also saw zero non-performing assets.

Since joining Ratnakar Bank, Ahuja says he has had to put aside his ego and work with a dogged determination to build an organisation that ranks among the top private sector banks in India. Assisting him is his head of strategy, Rajeev Ahuja, who is responsible for charting the future course of the bank. “The narrative we sell to investors is about the opportunity to participate in the financial services story,” Rajeev Ahuja says. 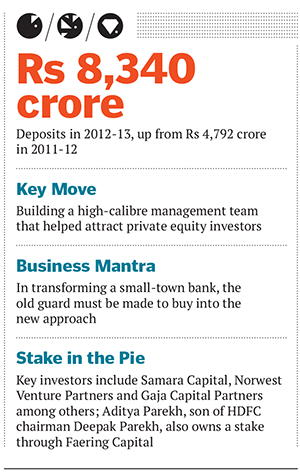 Why It Is A Gem
Vishwavir Ahuja managed to put together a high-calibre management team, a key factor in attracting investors. This has helped raise Rs 720 crore in two phases in 2010 and 2013, and has increased the bank’s capital base to Rs 1,100 crore. Also, it is not just about the money but who it has been raised from. Investors include marquee names like HDFC, Samara Capital, Norwest Venture Partners and Gaja Capital Partners. Aditya Parekh, son of HDFC chairman Deepak Parekh, also owns a stake through Faering Capital.

At present, Ratnakar Bank has tapped into three business areas. Given its roots in Kolhapur, the bank lends in the ‘agri-rural’ sphere. Then there is commercial banking for SMEs and mid-sized enterprises. Lastly, the bank is also focusing on spreading its geographic reach. While it started in Maharashtra and has a presence in Karnataka, it now seeks to tap into the National Capital Region market as well as Gujarat. “We have an innate view that there will be a secular growth for good financial services providers and we will grow faster than anyone else in the market,” says Vishwavir Ahuja.

Why It Was Hidden
Ratnakar Bank has been in the news in the last two years primarily because the company has undergone a transformation. Even so, its performance, potential and scope for success are known to few outside the close circle of investors.

The company does not have a large retail network across India (it still has fewer than 100 branches). It also has not launched an advertising campaign yet but that is likely to change in the next few months. It recently bought Royal Bank of Scotland’s commercial, home loan and credit card businesses in India.

Risks and Challenges
While the bank is adequately capitalised, the lack of scale does not allow it to reduce the cost of its services. Further, there are several modernisation steps that need to be taken. New customer relationship management systems have yet to be installed. More services have to be provided. The bank also suffers from the talent crunch afflicting the industry and has to poach from rivals, driving up costs. It also needs to reduce its cost of funds. All this will take time. Until then, the growth, like with all small banks, will have a bit of risk associated with it.