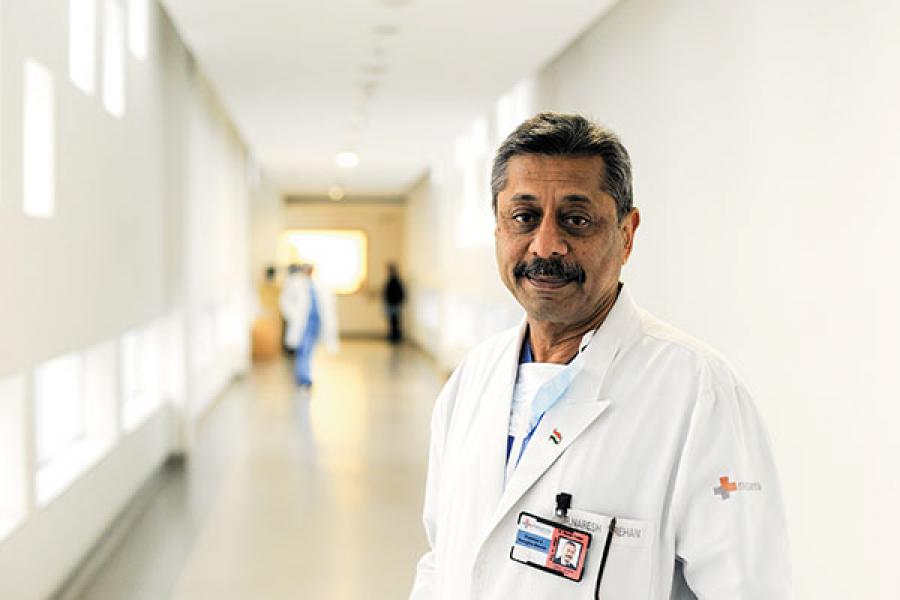 As one of India’s leading cardiovascular surgeons, Dr Naresh Trehan is always pressed for time. When Forbes India went to interview him, he had just stepped out of the operating theatre. Patients were streaming in and out of his chambers. It was only after an hour of consultations that Trehan found time to discuss his dream project: Medanta-The Medicity, a multi-specialty medical institute in Gurgaon, modelled along the lines of integrated medical institutes such as Mayo Clinic and Stanford University Medical Center in the US.

Since its inception in 2009, the hospital has rapidly grown and notched revenues of Rs 1,100 crore in FY2014. Its early success caught the eye of the Carlyle Group which, in December 2013, bought a 27 percent stake in it for Rs 960 crore from Avenue Capital. The deal values the company at Rs 3,550 crore, and puts Medanta’s enterprise value per bed at Rs 2.8 crore compared to Rs 1.4 crore for Apollo Hospitals and Fortis Healthcare.

The man behind it
Trehan (68) is hardly an unknown entity in the medical world. As the recipient of the Padma Bhushan and the Padma Shri, he has long been in the public eye. Also because of the prominence of his first business initiative, the Escorts Heart Institute (later acquired by Fortis) in New Delhi, which he helped establish in 1988. He left the hospital after two decades to set up Medanta with co-founder Sunil Sachdeva.

The initial investment of Rs 1,000 crore was raised through a mix of equity and debt: A Rs 500-crore loan from Yes Bank and six public sector banks, and the rest from Trehan, engineering and construction group Punj Lloyd and Avenue Capital. Medanta has paid off most of the loan, with Rs 126 crore remaining.

Trehan’s mantra is “business with a soul”. He wants it to be known that he isn’t interested in maximising returns for the hospital at the cost of his patients. “Hospitals should be happy making a return of 10 to 12 percent instead of 25 to 30 percent. Otherwise, we can’t make health care affordable,” he says. Medanta’s net profit for FY2014 was Rs 187 crore. 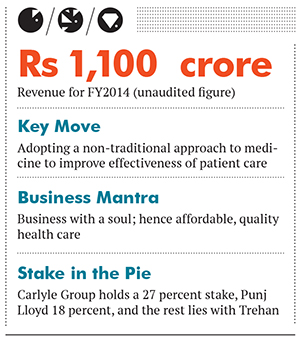 Why it is a gem
The idea of Medanta was conceived in 2003, when Trehan decided to develop a medical institution in India that would not only deliver high quality, affordable health care but also pioneer research. “I felt that if we have to take India to a level where we can be proud of our health care, we need to create institutions such as Mayo Clinic,” says Trehan. Built on a 43-acre plot, Medanta became operational in late 2009. It has a 1,250-bed hospital with 350 critical beds, a clinical research centre and a world-class training centre for doctors. Its net worth is Rs 785 crore.

Its approach to health care differentiates Medanta from other medical institutions. The institute is working towards integrating modern medicine with traditional forms such as ayurveda, acupuncture, homeopathy and unani. “We know that modern medicine is quite effective, but it is very costly and very invasive,” says Trehan. “It cures diseases, but doesn’t empower the body to fight diseases the way traditional medicine does. If we can make a fusion of the two, we will have a powerful new medicine which will be equally effective at half the cost.”

The hospital already has therapies where it uses allopathic and ayurvedic medicine. Trehan claims he has had early successes in these practices, that are particularly effective in neurological and cancer treatment. “When throat cancer patients undergo radiation, it becomes really difficult for them to swallow food or talk,” says Trehan. “A friend who had this problem was given an ayurvedic concoction before the radiation and it eased his discomfort.”

To further the intent of research, Medanta has also signed a memorandum of understanding with the University of Texas to set up a medical college within the institute’s premises.

Why it was hidden
There is a distinct lack of ‘buzz’ about Medanta because it has not yet spent heavily in marketing and advertising. Instead, it invests its returns back into the business. Plus, its operations have been localised, as it is currently based only out of Gurgaon. However, expansion is on the cards with Medanta set to open a hospital in Indore this year. The goal is to have a hospital in the capital city of all states.

Risks and challenges
One of the biggest challenges the institute faces is the rising cost of health care delivery. Cognisant of that, Medanta is working on improving procedures and delivery systems to reduce costs.

Also, some quarters are sceptical of the non-traditional approach to medicine. Dr Sanjeev Bagai, vice chairman and director-dean of Manipal Hospital in Dwarka, New Delhi, says: “Any alternative therapy used should not contain ingredients that can counteract our medicine or damage body organs. There is no published data to show the efficacy of traditional medicine. In fact, there is enough data to show it can be harmful.”

But Trehan has faith in his approach. And, with expansion and international tie-ups as part of his strategy, he is quietly confident that Medanta will soon become a significant fixture in the health care industry.