In the last two years, the Hyderabad-based company has achieved exceptional scale in the business of setting up plants for India's power companies 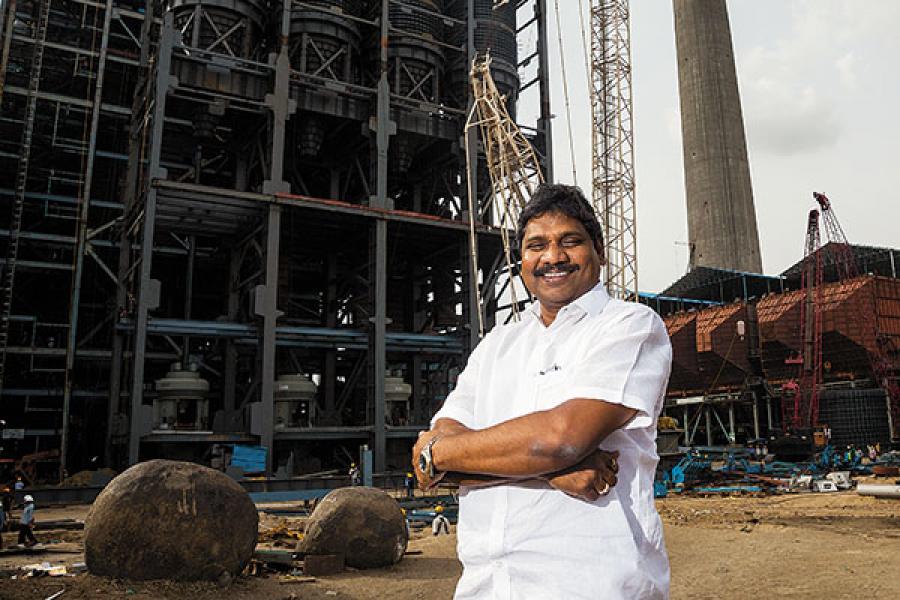 The first step of setting up a plant is the most arduous for any power company. It requires intense engineering expertise which is often in short supply—and also proves expensive to acquire and retain. The simpler option is to outsource the heavy-lifting: Enter Power Mech Projects, a Hyderabad-based company, which spotted this opportunity back in 1999.

Having overcome the hurdles of bank financing and talent, it has now become one of the few players to achieve scale in this business. With a consistent growth of about 15 percent annually, Power Mech boasts a list of marquee private players—Tata Power, Adani Power and Jindal Power to name a few—as well as public sector power producers such as NTPC.

2013 has been one of Power Mech’s busiest years: It built, tested and commissioned projects for a cumulative capacity of 40,000 MW across India. It also erected 65 boilers and 80 turbines during the period. And, in the process, it crossed Rs 1,000 crore in revenues for the first time.

The man behind it
Entering this industry is not for the weak-hearted. S Kishore Babu, however, was confident when he took the call to set up Power Mech. After all, he had spent the first 14 years of his career in an engineering company, Indwell Construction, where, at the age of 28, he was part of a team that helped set up power plants. He rose up the company’s ranks to additional managing director and, later, to joint MD. That was when Babu decided to branch out on his own.

As he saw it, he was the driving force behind the company’s success and had, over the years, built strong associations with NTPC and BHEL, a power plant equipment manufacturing and engineering PSU. “Why not do it for myself I thought,” says Babu, now 49. Within a year of his quitting Indwell, he had tapped into his extensive network and founded Power Mech.

Babu’s personal touch and execution skills have resulted in his company gaining contracts from several large power producers in India. His colleagues describe him as someone who is relationship-oriented. “Once he sees someone, he does not forget the face,” says an employee at Power Mech.

The company had a modest start in 1999 with a maintenance job at Tata Power’s plant at Trombay in Mumbai. “They knew me, and that is how I got the job,” says Babu.

In its first year, Power Mech generated revenues of Rs 5 crore; this helped him get the bank guarantees necessary to start offering construction services that included erecting boilers, turbines and other machinery. A year later, BHEL also registered Power Mech as a contractor and the company began to get a steady stream of projects. 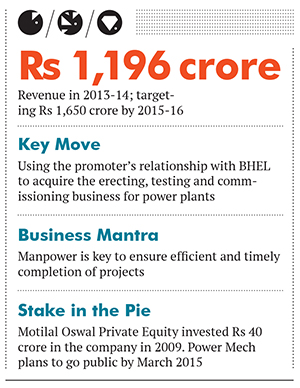 Why it is a gem
Power Mech has now been in the business for 15 years. It has acquired a high-profile and large customer base. These relationships are not easy to replicate, and managing them are a particular strength of Babu’s. Also, now that it has strong ties with these companies, it has started to get maintenance jobs as well. Unlike construction contracts, these are annuity businesses with 3-5-year-long contracts and Ebidta margins of 20-22 percent. This ensures a steady stream of revenue for Power Mech.

Most significantly, while several companies have reached the Rs 50 crore-level, few have managed to break out to this extent. With revenues of Rs 1,196 crore, Power Mech is an exception. In fact, the buoyancy of the last two years has led Bapu to up the sales target to Rs 1,650 crore by 2016. A listing by March 2015 is also being discussed.

Why it was hidden
While Power Mech’s current numbers may be impressive, it took Babu 15 years to achieve scale and get private equity players interested in the business. It was only in 2009 that Motilal Oswal Private Equity took note of it and invested Rs 40 crore for an undisclosed stake. Further, despite its obvious relevance—and the fact that it plays a role in keeping our lights on—Power Mech’s work with power plants is not a consumer-facing business.

Risks and challenges
Sustaining this pace of expansion will be Babu’s biggest challenge. In the business of erection, testing and commissioning plants, a key requirement is contracting a large number of qualified people quickly. For instance, manpower strength can be as high as 2,000 for a single project. “And those that have migrated to the Gulf [where such projects proliferate] don’t want to come back,” he says.

Realising that this would be a problem as the company grows, Babu draws on his extensive network to ensure he can hire the requisite manpower as soon as he inks a contract. At present, the company has an order book of Rs 3,000 crore. He is also hiring around 50 engineers every year to keep the pipeline robust.

The other danger is that the business tends to get a little lumpy. Consider that in the last two years, several independent power generators have been unable to get financial closure forcing companies like Power Mech to increasingly rely on government power producers. But this, too, could become a question mark with the government announcing its intent to re-examine contracts.

These challenges might intimidate a newbie but Babu, empowered by his experience, is unfazed.

Tweets by @forbesindia
Wealth wizards on the art of investing
Medanta-The Medicity: World class health care, with a soul