Seventeen years on, India still struggles to come to grips with cryogenic technology for its space programmes 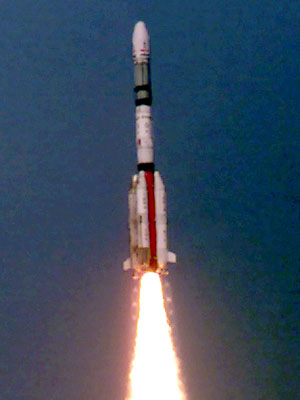 India has had reasonable success in the global race for space. After the success of its moon vehicle, Chandrayaan-1, launched in October 2008, the Indian Space Research Organisation (ISRO) wanted to scale new heights with its first independently developed cryogenic engine. Sadly, it was not to be.

On April 15, 2010, India launched communication satellite GSAT-4 into orbit. The Geo-Synchronous Satellite Launch Vehicle (GSLV) was powered by an indigenous cryogenic engine that was the result of 17 years of research by the brightest minds in India. The engine failed to ignite and the GSLV crashed into the Bay of Bengal.

Now cryogenics is not an easy technology to master. Cryogenic rocket engines use liquid hydrogen as the fuel and liquid oxygen as the oxidiser. Oxygen turns liquid at minus 185 degree centigrade, and Hydrogen at minus 256 degree centigrade. The materials used must withstand extreme cold. But, the other end of the engine must withstand extreme heat — over 2,000 degrees.

India had until now (from 2001 to 2007) launched five GSLV satellites into space, all of them powered by Russian cryogenic engines. Three of them were successful. Yet, it was because of the Russians that India embarked on developing its own cryogenic technology.

Under Mikhail Gorbachev, Glavkosmos, the Soviet Union space agency, had agreed to transfer cryogenic engines and technology to ISRO. But very few countries have access to cryogenics and those who do, guard it zealously. The US, Europe, Japan and China are averse to sharing. The Russians of course made an exception for India. India and the USSR said cryogenic technology was strictly for non military uses. They would only be used for communication and weather satellites.

The US did not believe them. In 1991, the Bush (senior) administration invoked the Missile Technology Control Regime, an association to stop proliferation of missiles that could be used for mass destruction, to impose sanctions on the Soviet and Indian space agencies. Soon after, the Soviet Union disintegrated and the a new government under Boris Yeltsin took control. Yeltsin’s government favoured the West. In 1993 Yeltsin arrived at a compromise after he met Bill Clinton (who had taken over from Bush in January 1993) in the US. Russia would not transfer the technology, but it would sell seven cryogenic engines to India.

India decided to fight back — by developing its own cryogenic technology. Over the last 17 years, Indian scientists, most of them at ISRO’s liquid propulsion centre in Thiruvananthapuram, worked on what was termed CUSP, cryogenic upper stage project. “Cryogenic technology is not just about the engine. Each stage is like a rocket by itself,” says an ISRO official.

ISRO has said it will launch the satellite again next year. USSR started the space race by launching Sputnik in 1957, but had to wait till the mid-80s to launch a rocket powered by cryogenic propellants. “It’s not even fair to judge ISRO’s on the basis of one mission. I think they are doing a great job,” says B.N. Raghunandan, a professor at the Department of Aerospace Engineering at Indian Institute of Science.

India has already spent 17 years on cryogenics. Let’s hope we don’t have to wait another 15 years for a successful launch.

Tweets by @forbesindia
Philanthropy Trends Across The World
South Africa: Rise of The Black Middle Class