Next year, there is a good chance that the first truck that rolls out of Daimler’s very own plant in Chennai will be decorated with bright yellow marigold flowers. There may even be a smear of vermillion and the traditional breaking of coconut.

The ceremony would be quite in order because the German giant will be thanking the gods for bringing an end to its 55-year-long wait to enter India on its own.
It was in 1954 that the old Daimler-Benz fell for India, alas India did not fall for the old Daimler-Benz. Fresh from independence, Indians were reeking of nationalism and weren’t in the mood to allow a foreign company an easy ride.

The story of that wait is the story of India’s journey from high-pitched socialism to free-market principles. When Mercedes-Benz trucks first came to India, it was big news. Until then, local companies built truck bodies on imported chassis. The lack of automotive engineering expertise among Indian companies led to a Daimler-TELCO (Tata Engineering and Locomotive Co.) pact to launch its Mercedes-Benz trucks. Since the Tatas had a licence to make 1,000 trucks per year, it was the only way Daimler could make its presence known in India.

Though Daimler took a 10 percent stake in TELCO, it knew that it would remain a mere technology supplier. Then by virtue of acquiring Vidal & Sohn Tempo Werke GmbH in the early 1970s, Daimler-Benz became associated with yet another Pune-based company, Bajaj Tempo. In 1982, Diamler licensed the know-how behind one of its engines, OM616, to Bajaj, with which the latter made light commercial vehicles. 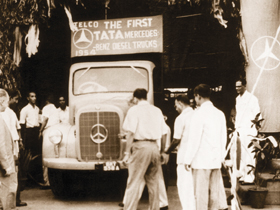 Image: Tata Archives
The Tata- Mercedes that was unveiled in 1954 emerges from a garage. Now Daimler-Benz trucks will ply on Indian roads

With policy changes in the 1990s, foreign investment norms were relaxed substantially and Volvo set up its truck venture in Bangalore in 1998. Daimler would have loved to do so too, but it was already locked into relationships with Indian companies that it could not extricate itself from immediately. Around the turn of the millennium, a global economic slowdown saw Daimler postponing its entry into the commercial vehicle market in India. It had even sold off its 16.6 percent stake in Bajaj Tempo when it restructured its India operations in 2001. As the Indian economy boomed after 2004, Daimler started scouting for local partners. It picked the Hero group, but the partnership fell through. And Daimler found the only way to get into India was on its own.

(This story appears in the 19 June, 2009 issue of Forbes India. You can buy our tablet version from Magzter.com. To visit our Archives, click here.)