You won’t find solutions to rural India’s health issues in modern facilities that are far removed. Effective strategies will emerge only when you work with the people 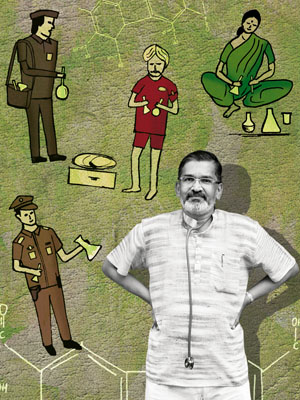 Dr. Bang is founder-director of SEARCH, an NGO that provides community health care to the tribes of Gadchiroli district in Maharashtra. With an MD from Nagpur University and a Masters in Public Health from John Hopkins, Bang and his wife Rani have worked at reducing infant mortality rates by 50 percent in the areas they operate in. He is currently a member of the National Commission on Population and also serves on the advisory board for the global Saving Newborn Lives Initiative


The world is increasingly being shaped by new knowledge. The inventions of the steam engine and automobile, of telephone and television, of vitamins and vaccines have shaped our lives more than the presidents and prime ministers of those times. ‘How to achieve 10 percent rate of economic growth?’ is a less important question than how to achieve growth of knowledge by way of research.

However, there is a potential problem. Those who will generate and own knowledge will own the world. Those who don’t will be slaves. Disparity in research capacity will be worse than economic disparity because it is more fundamental. Therefore, for true democracy, it is necessary that people be a partner in research. Research with the People!
Can this become a reality? What will be its features?
My school of learning is a community of nearly 100 villages in Gadchiroli district in the central part of India. This is a poor, undeveloped rural area where people survive on agriculture and forest, truly representing rural India. In the past 25 years, while working with these semi-literate people, we have learnt some cardinal rules of Research with the People.
Rule Number 1, research is to be conducted where the problems are, and not where the facilities are. Usually, the places with facilities are overcrowded with aspirants or furniture. Robert Koch discovered the bacteria Vibrio cholerae as the cause of cholera by travelling in a ship nearly 10,000 miles in search of the land with cholera. He first went to Egypt, then came to India and completed his monumental discovery. He became the father of bacteriology.
Go where the problems are, and not where you are a problem.
After studying medicine in India and public health in the US, nearly a quarter century ago, my wife Rani and I came to Gadchiroli with a question: How to improve health of the people of India? Through some initial blunders we learned the second rule: The research should not be conducted merely because I find it intellectually interesting. It should address the needs of the community I work with, not the research community I report to.
Where are such topics? Rule Number 3: Very rich researchable topics are waiting all around us to be discovered. But we are looking at somewhere else for something dramatic. The ordinary, the common does not appeal to us as a research challenge. In reality, great discoveries are hidden in it. The falling of an apple was not an exciting or unusual event. But Newton saw the hidden meaning in it. Such apples are falling around us everyday.

Which health problems needed research? Whom should we ask? We invited the community leaders, men and women, from 40 villages, and asked them, “Which health problems trouble you the most ?” Over the years, such ‘people’s health assemblies’ have become an annual event in our area. They identify issues for research and action. I shall describe one of these.
People, especially women, said, “Our children are dying”. We established a system in which trained village men, our ‘bare-foot researchers’, recorded and investigated all child deaths in 86 villages. This gave us an important insight 20 years ago: Newborn period, the first 28 days after birth, was the riskiest period. Deaths during this period accounted for nearly 75 percent of the infant mortality rate. (Global experts estimated recently that 1.1 million newborns die every year in India, and 4 million the world over.) How to save them? Standard medical guidelines advised immediate hospitalisation of sick newborns. But hospitals were too far and too costly. Traditions prohibited moving the recently delivered mother and newborn out of the home. Why not then move medical care to the home?
Who can provide it? Why not educate mothers and grandmothers about newborn care? In addition, why not train and equip one literate woman in every village to become the ‘barefoot neo-natologist’? Thus emerged a new model: Home-based newborn care!

This model does not depend upon doctors, nurses, hospitals or costly equipment. It empowers women to use simple medical knowledge and skills to save their newborns. A carefully conducted research trial of home-based newborn care in 39 villages of Gadchiroli showed that within three years (1995-98) newborn mortality reduced by 62 percent. By the seventh year (2003), the infant mortality rate had come down from 121 to 30, to the level of India’s national goal, much ahead of the rest of the country!
This research has become a ‘Vintage Paper from the Lancet’, and a global trend setter. Several countries in South Asia and Africa are adopting it. The Government of India has decided to introduce it in hundreds of thousands of villages. And finally, in 2009, the World Health Organization and UNICEF have endorsed this approach for use in developing countries.

In the past 24 years, four such research studies conducted with the people in Gadchiroli have shaped national or global health policies. It is a confirmation of Archimedes’ assertion that if given a lever long enough, he could move the Earth. Knowledge is that lever. Research with the People can generate knowledge which can change the thinking in New Delhi or New York, London or Geneva.
Research with the People will be characterised by five features: 1) People should need it, 2) people should do it, 3) people should understand it, 4) people should use it, and 5) people should own it.
Where can it be found? To borrow the expression of late C.K. Prahlad, “There is a fortune at the bottom of the pyramid.” The poor, the women, the tribals and the rural people constitute the bottom of the pyramid. The fortune there is in the form of helping the powerless become empowered. Research and action with the people can make that happen. It is not an accident that The Economist has recently published a special report on how the emerging economies are rapidly becoming the new powerhouse of innovations. They may lack money or advanced technology, but they have the people. In the modern world connected by the Web and computers, every citizen can have access to information. If every human brain has the innate capacity to ask questions and solve problems, then everybody can be educated to become a researcher.
How to do that? I cannot describe it better than the ancient Chinese poem which said,
Go to the people
Live among them
Love them
Listen to them
Begin with what they know
Build upon what they have.

Tweets by @forbesindia
Milton Glaser: Make a Distinction between What is Art and What is Not Art
Mriganka Sur: A New Look into the Brain