Mriganka Sur: A New Look into the Brain

Brain diseases are often sources of shame for people who have them. Understanding that such diseases are bodily afflictions is key to finding a better cure 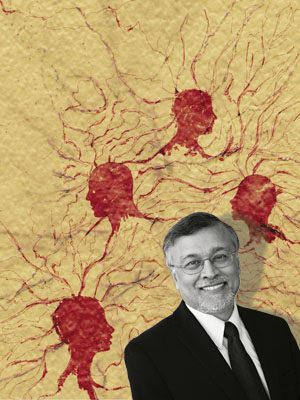 Mriganka Sur is the Paul E. Newton Professor of Neuroscience, Head, Department of Brain and Cognitive Sciences, and Director of the Simons Initiative on Autism and the Brain at MIT. He studies the organisation, development and plasticity of the cerebral cortex of the brain using experimental and theoretical approaches. He has discovered fundamental principles by which networks of the cerebral cortex are wired during development and change dynamically during learning. Recently, his group demonstrated novel mechanisms underlying disorders of brain development, and proposed innovative strategies for treating such disorders.

I have been fascinated by the human brain from my student days, even though all my training has been in electrical engineering — first during my undergraduate degree from IIT Kanpur in 1974 and then during graduate studies in the US. Everything starts with the brain: Our ways of thinking, our understanding of the world, and for that matter, our ways of changing the world. So understanding the brain will not only help us treat brain disorders and build intelligent machines but also enable us to grasp and change the human condition.

Here, I will try to distill what I have learnt as a brain scientist into one key idea that I believe is truly important for change that can be transformative and impactful.
This idea is disruption.
What do I mean by this? Disruption, or a radical change that breaks from the past, is critically important for a society and for science and technology to leap forward. I believe that change is overwhelmingly incremental or gradual because that is the kind of change encouraged by systems. Systems of people, of science and of organisations are about gradualness.
Yet the problems that confront us are not going to be solved fundamentally that way. And this is all the more true in the developing world. The West has advanced to where it has by exponential change, if you will, including many disruptive changes in its centuries of development. In the developing world, we seek to emulate the same goals and trajectory but we know that sequence cannot be repeated. For instance, we cannot have the same kind of consumptive development and hope to build a sustainable future.
There has to be a disruption in the way we think about development, or science and technology, or even progress. There are many challenges of our time such as social inequality, economic inequality and inequality in terms of access to resources like energy or water. These problems cannot be solved without massive disruptive change in the way we approach them.
I am a tremendous believer in the possibilities of the human mind to solve problems. But this creative potential requires formal as well as informal ways to be unleashed, and in a manner that will reward disruption.
In my own field of neuroscience, there is a complicated history of how we understand diseases and disorders of the mind. It used to be thought that mental disorders are due to mystical causes or are caused by reasons outside of the body.
The single most disruptive transformation in our way of understanding human health and disease is that we now know that there can be no pathology or disease without an underlying biology. And while many diseases do start with external causes such as parasites and infections, it is their interaction with the body that leads to diseases.

Many brain disorders and diseases are sources of shame for patients today. This is so in the West, and particularly so in India. We need to demystify these disorders of the mind just as we have done with tuberculosis or malaria or any of the more common diseases of the body. The mind is a product of the brain, and its disorders reflect disorders in how the brain works.
Yet we often do not think of mental diseases as having biological causes. The many different kinds of mental disorders — including autism and learning disorders on one end of the life span through schizophrenia, bipolar disorder, Parkinson’s and Alzheimer’s disease on the other end — are all specific diseases that have specific roots in the brain. And the truth that there are physical, brain-specific causes of these mental disorders and diseases is a deeply disruptive way of thinking about them.
Going even deeper, the way we treat brain disorders has to do with a profound disruption in the way we understand the brain itself. For instance some of our own work begins with the idea that how the brain develops is linked to specific disorders of the mind.
In Western Europe and America, there are tens of millions of people who suffer from brain disorders. There is no reason to think that the numbers are radically different in India; it is just that the numbers are hidden. After heart disease and cancer, brain disorders are some of the most devastating disorders that afflict individuals, families and society. Because brain disorders are often life-long, and because they extract an enormous emotional as well as financial toll, the burden of brain disorders is extremely high.
No society — particularly one that has ambitions to be at the forefront on the global stage — can progress without dealing with these diseases. All brain disorders will be understood as disorders of biology, and their treatment will involve many kinds of disruptive thinking. Take autism, of which there are many forms and biological causes, though with common clinical signs. In these ways autism resembles cancer, which also has various forms and causes. Yet there are no drugs based on mechanisms of disease for treating autism or the vast majority of mental disorders and diseases.

An important step for neuroscience is to understand and treat subsets of autism in the same way that we are beginning to understand and treat subsets of cancer. I am not suggesting autism is cancer because cancer is normal biology gone awry. But one kind of autism is due to delayed development of synapses in the brain that leads to underdevelopment of certain cognitive processes. Based on this discovery, my laboratory has proposed innovative therapeutics that are entering clinical trials.
Disruptive ideas often start at the interface of fields, such as the confluence of science and engineering. I am starting collaborations with neuroscientists and neurologists in India to study the biology of the brain and its disorders. I hope to spark similar ideas among my fellow researchers, and help Indian scientists disrupt their fields in the process!