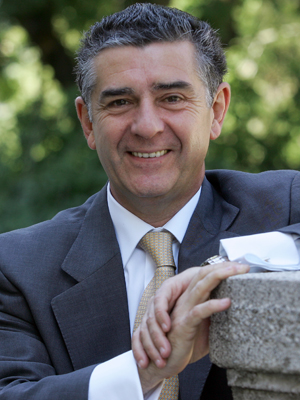 In crisis situations gauging the economic value of a company’s assets plays a key role in deciding whether to persevere with a business or not.

It is an issue that is currently under the spotlight, attracting interest that goes beyond the merely academic. Bear in mind that valuation in distress is one of the biggest difficulties countries now face in their ongoing struggle to implement successive reforms in their finance systems. Moreover, it is becoming increasingly obvious that there is little hope of pulling out of the current economic crisis until finance systems have been reformed.

A company is considered to be in distress when it is unable to meet debt payments, often following failed attempts to generate the necessary cash flow  by implementing operational restructuring measures.

When a company is in distress, it has two options.

a)    Reach an agreement on debt restructuring through a private procedure.
b)    File for insolvency which could result in an insolvency agreement or in liquidation.

In order to reach a debt restructuring agreement through a private procedure it is first necessary to do a valuation of the company.

How to value a company in distress
The key to carrying out a reasonable valuation lies in establishing the main objectives that the valuation process needs to achieve.


It is important to remember the following:

1)    The value that you need to establish is the company’s economic value, not its accounting value, sentimental value, literary value or any other kind of value that is not purely economic.
2)    The overriding aim is to establish the economic value of the company’s net assets.
3)    The economic value can be extrinsic value , which is quantified by means of external or market references, or the intrinsic value , which is based on the fundamentals of the business set out in its business plan.

The economic value of the company in liquidation will obviously be the value it can obtain from the sale of all its net assets after tax. It is therefore a market value from which the applicable tax must be deducted.

What is the best way to determine a reasonable value for a company if it were to choose the debt restructuring option?

In theory, it doesn’t seem reasonable to use only one extrinsic value reference, given that it is a question of gauging the economic value that will result from restructuring.  It is more logical to define exactly what the restructuring process will consist of, ensuring that it includes both operating and financial restructuring components, and to value the company in a scenario in which such changes have already been implemented and due consideration has been given to the firm’s sensitivity to the main variables that will affect its economic value.


For a valuation of this type it is usually a good idea to use the discounted cash flow method, and compare the value obtained with market references.

Could it make sense to value the firm by considering real options? Yes, provided that these options have a clear economic value, which means that they must be exclusive and explicit. In any case a valuation based on real options should be similar to valuations made using discounted cash flows, including the possible value of operating flexibility.

Table 1 shows the key elements to consider when carrying out a valuation of a company in distress. 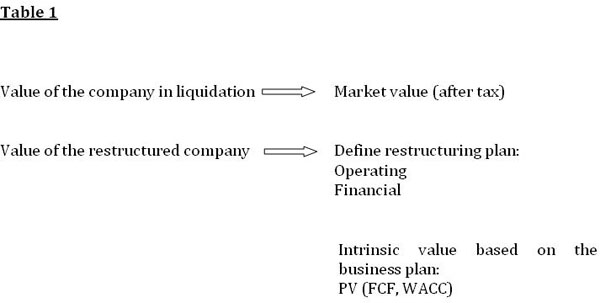 Note that this method produces an estimated value of the company’s operating assets. If the company in distress has non-operating assets and the operating restructuring plan doesn’t make provisions for their use, it will be necessary to make the pertinent adjustments (positive and negative) in order to include the value that could be derived from said operating assets.