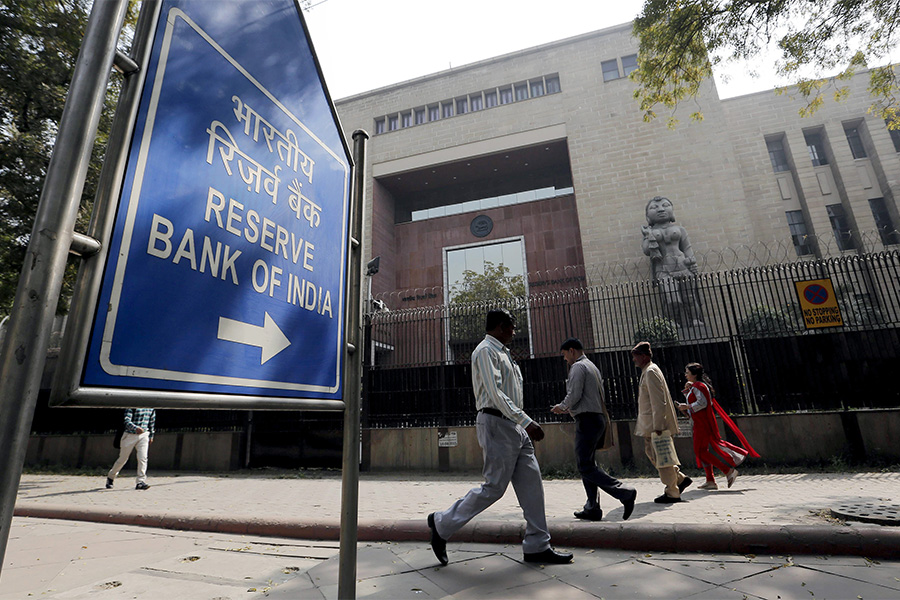 Image: Anindito Mukherjee / Reuters (For illustrative purposes only)
Reserve Bank of India (RBI) has been gradually tightening its noose around Indian banks’ increasing non-performing assets (NPA). Since the economic downturn in late 2008, Indian banks resorted to reporting restructured assets (RA) on their balance sheet at a par with standard assets. The RA window provided relaxation in interest rate norms or installment payment or loan duration to borrowers who expressed inability to repay loans owing to poor economic conditions.  Initially, the banks used this window in the true sense. However, gradually the banks started window dressing their non-performing assets as restructured assets even when they were certain of non-recovery. This reporting of assets as restructured assets in the form of standard assets led to misrepresentation of the banks’ true financial position and asset quality. On an average, restructured assets as a percentage of total advances increased from 1% in 2008 to 6% in 2013.

As a first step towards removing this misrepresentation, RBI in 2013 revised the norms of treating restructured assets as non-performing assets (NPA) and imposed a provision charge of 15% on RAs thereby bringing it at par with NPAs. The RBI also wanted the banks to clean up their balance sheet by early 2016 and gradually report these RAs as NPAs, particularly if there was no certainty of recovering the exposures created by such loans. This led Indian banks to gradually report lower and lower RAs over the subsequent years; consequently the banks bumped up the Gross Non Performing Assets (GNPA). GNPA formed 3% of the total advances in 2008 increasing to 5% in 2013 and 7% in 2016.

We tried to assess whether RAs were truly used as a window to misrepresent NPAs by the Indian banks; in that context, we studied NPAs reported by Indian banks and attempted to evaluate whether RAs affected NPAs during the period 2006 to 2016. The time period 2006 – 2016 is segmented into 2006-2013, 2013 – 2016 and 2015 – 2016 in accordance with the period of the revised restructured assets norms implementation and the period of the deadline when the revised restructured assets norm approached. We find evidence that restructured assets that was used as an explanatory variable to capture NPAs was statistically significant during the period 2006 – 2013 and was positively related to NPAs. This meant that higher the RAs higher would be the NPAs. However, when the revised restructured assets norm was being implemented during 2013 – 2016, we found evidence that RA became statistically insignificant. Finally, when we looked at RA during 2015 – 2016, as the deadline to implement this norm was soon approaching the RA variable was statistically significant but the co-efficient held a reverse sign with the value of the co-efficient near zero. Hence, this study served as an indication that Indian banks were using RA to misrepresent the banks asset quality.

The second step taken by RBI and was effective since April 1, 2017 when a revised prompt corrective action (PCA) framework was to be implemented on banks. Under this bank has to maintain certain thresholds that are based on capital, non-performing assets, profitability and leverage ratio. Breach of these thresholds will imply merger with another bank or reconstruction of the bank or bankruptcy for the bank.

The PCA framework proposes three thresholds under which: 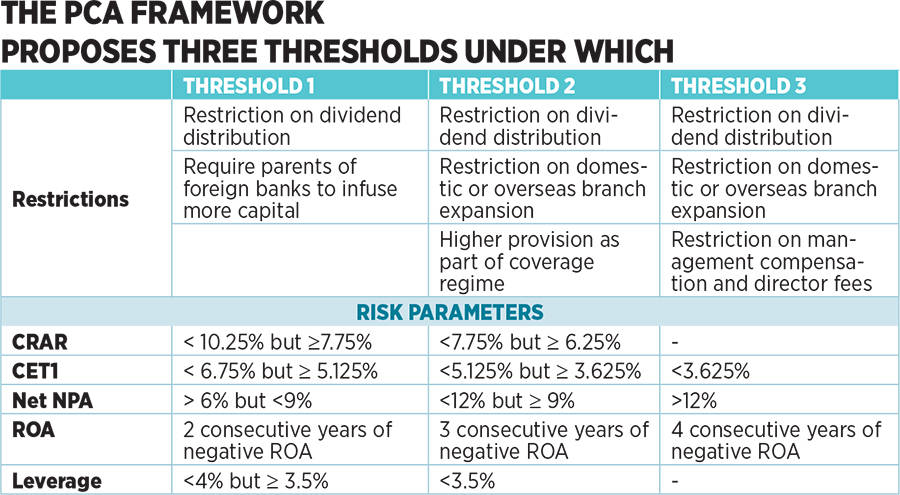 In case a bank is crossing threshold 1, PCA is meant to curb the risk taking capacity of these banks and address the problems associated with the weak asset quality faced by Indian banks in the current settings.  The prime objective of this PCA is to restore and strengthen the healthy banks net worth. However, in case a bank tends to cross threshold 3, RBI may undertake a move to consolidate the distressed bank with a healthy bank. In this manner, the net worth of Indian banks will not only be strengthened but also restored to a great extent.

Thirdly, the decision by Government of India on May 5, 2017 to allow an ordinance to amend banking regulations and clear the NPA resolution package has granted RBI greater powers to fix GNPA worth INR 5,930 trillion as on March 31, 2016. Under this ordinance, the government has powers to authorize RBI to invoke the Insolvency and Bankruptcy code against defaulters. Earlier efforts of RBI in the form of strategic debt restructuring and sustainable structuring of stressed assets to resolve NPA situation operated under a very rigid framework with banks unable to initiate insolvency under the insolvency and bankruptcy code with a liability to questioning. Under the new amendments, a bank can initiate insolvency proceedings under the RBI directives following a transparent and market-determined approach. This may make a difference and allow RBI not only to monitor asset quality but also clean and fully provision the banks balance sheet .

However, these amendments may also pose a few hurdles:
a) Guidelines for deciding when a bank should undertake insolvency proceedings towards defaulters are yet to be laid out.
b) Commencing insolvency is a cumbersome process and at the moment with no established secondary markets for the collateral securities banks may face constraints to sell collateral securities.
c) Mounting NPAs may lead banks to offload similar loan exposures under insolvency but this may generate a glut of similar securities in the market. Excess supply of similar securities in the market may cause a dip in their sale prices that may lead to no incentives for banks adopting the route of insolvency.

RBI has been gradually inching towards tightening its noose around banks and strengthening the banking system on the whole through various measures such as PCA or RA revised recognition norms or modifications in the banking regulation act around NPAs. This hopefully would lead to a more sound and stable banking system in the country and also act as a stabilization factor to the entire financial system of the country.- Sankarshan Basu is Professor, Finance and Accounting Area, Indian Institute of Management Bangalore and Jaslene Bawa is Fellow, Indian Institute of Management Raipur

Tweets by @forbesindia
Product dealerships and service providers: The standard problem with their frontlines
On cyber attacks and the accidental war