Why Business Should Be Alarmed: Lessons from Thailand

With just a few days to go before the G20 summit in Cannes (France), it is no exaggeration to say that the world is in an unholy mess: the US debt crisis and political gridlock, the Eurozone crisis and possible implosion, Japan remaining in a deflationary straitjacket and now the possibility that China – hitherto seen as the last global economy locomotive on track – may be heading for either a soft, or, as some predict, a hard landing. Indignation, anger and despair are fueling protest movements across the globe.

In addition to the somewhat hair-raising economic prospects, by no means are things quiet on the geopolitical front. There is reason to be concerned about the situation in the Persian Gulf, not to mention the South China Sea where tensions are brewing. The Arab “Spring” is certainly exciting and in some respects promising, but is also a potential tinder box. Last (for now), but by no means least, this has been a savage year for natural disasters: Japan, Thailand and Turkey, among others. 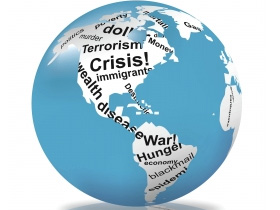 All this is occurring at a time when global governance is in a parlous and paralyzed state. The ten-year WTO multilateral trade (Doha) Round has been stalled – some would say actually dead – for the last four years at least. There has been no major outburst of protectionism yet, as had been feared, but the operative word is “yet”: there are signs, especially in the US-China ring, that things could turn nasty. The climate change talks since Copenhagen in 2009 are also stuck in acrimony. The UN has been dysfunctional, though that is hardly news!

While all these developments and calamities occur, business has, for the most part, been out to lunch. The same has been true to a considerable degree of business schools. The ideology and mood generated by the Thatcher-Reagan “revolution” resulted in a narrow focus on markets at the expense of other factors. As has often been commented, the lack of interest demonstrated by business in the WTO has been striking. With some notable exceptions, climate change and other environmental issues have been perceived mainly from the viewpoint of their regulatory effects. When business has been present, it has been mainly to lobby against specific potentially constricting rules and not for a global long-term approach to sustainability. Business has been, at best, myopic.

The point surely is that no matter how much one would want it to be otherwise, the real world cannot be separated into functional (or dysfunctional!) departments. Geopolitics, local politics, demographics, social forces, education, infrastructure, climate change, environment, trade policy, markets, and international aid—fiscal and physical—are all inter-linked. The floods currently drowning Thailand are an illustration.

With several hundred deaths, contaminated waters running through the streets of Bangkok and other cities, some 9 million (15% of the population) homeless, rice paddies totally devastated, and food prices soaring, it is clearly a great human tragedy. Though Thailand is by Asian standards a medium-sized country, with 67 million people, it is in many respects pivotal. It is the only country in Southeast Asia that was never colonized – hence Thailand, “the land of the free.” By Southeast Asian standards it has been relatively stable politically: there have been frequent military coups, riots and other forms of political unrest, but--unlike its neighbors--no civil wars, no genocide and no large-scale bloodshed. And it has been a loyal ally of the West.

The devastation of the floods will have a monumental negative impact on the Thai economy, knocking several percentage points off its GDP. With factories inundated and closed all over the country, unemployment will soar. Though Thailand has been dubbed the “kitchen of the world,” its farmers now face nothing short of devastation. Following a recent period of political tension and instability, a new and untried government with an inexperienced prime minister will now be sorely tested; political discontent and instability may be almost inevitable.

Furthermore, though Thailand does not feature among the BRICs, nor is it a member of the G20, it plays a vital role in the global economy. Indeed, Thailand is a major hub of the global supply chain across many sectors: automotive, electronics and agribusiness, among others. Following the traumatic effects of Fukushima in the spring, Japanese car companies Honda, Toyota and Nissan are again facing severe disruptions in their manufacturing due to the Thai floods. In electronics, especially hard-disk drives where Thailand has a major market share, the impact of the Thai floods is quite destructive. There will be ripple effects. As retailers seek to build inventory in anticipation of the Christmas season, there will be shortages.

It should be evident even to those not involved in the manufacturing or retailing of consumer electronics that the results of the Thai floods illustrate the need for strong mutual support and coordination between business and governments at a global level, not only in times of natural disasters but on an ongoing basis. It should be, but it is patently not the case. Though business may talk the language of global governance, there is little evidence that business leaders are willing to advocate for this, to put resources and time toward a more stable global economic system, until their own particular business is hit, by which time it is usually too late.

We live in an exciting world, a highly interconnected world, but also a very fragile and volatile one. Business needs to understand – and business schools need to teach – not only the dynamics and strategic implications of integration across markets, but also the strategic implications of the integrative dynamics across geopolitics, politics, society, environment, technology, resources, etc. Beyond understanding, business should be a force for greater global responsibility through the promotion of much more robust and effective global governance. Good business should promote good governance, just as good governance should promote good business.

The G20 summit is, unfortunately, likely to end up reflecting the unholy mess of the broader global environment. This should not be just dismissed by political leaders as an irrelevant political circus. In order to reverse the current trends seemingly leading to the self-destruction of capitalism, business leadership manifested in active and constructive global citizenship is an absolute imperative. This is the message The Evian Group @ IMD has been relentlessly seeking to convey throughout its sixteen years of existence.

Jean-Pierre Lehmann is Professor of International Political Economy at IMD, Founding Director of the Evian Group @ IMD and Senior Fellow at the Fung Global Institute in Hong Kong.

Maury Peiperl, Ph.D, is Professor of Leadership and Strategic Change at IMD and Chair of the Evian Group Faculty Advisory Board . He is the co-author of the market-leading text "Managing Change: Cases and Concepts" and is an expert blogger for Fast Company magazine.