Kerala's economy is catching up with its high social indices, but threats are rising too 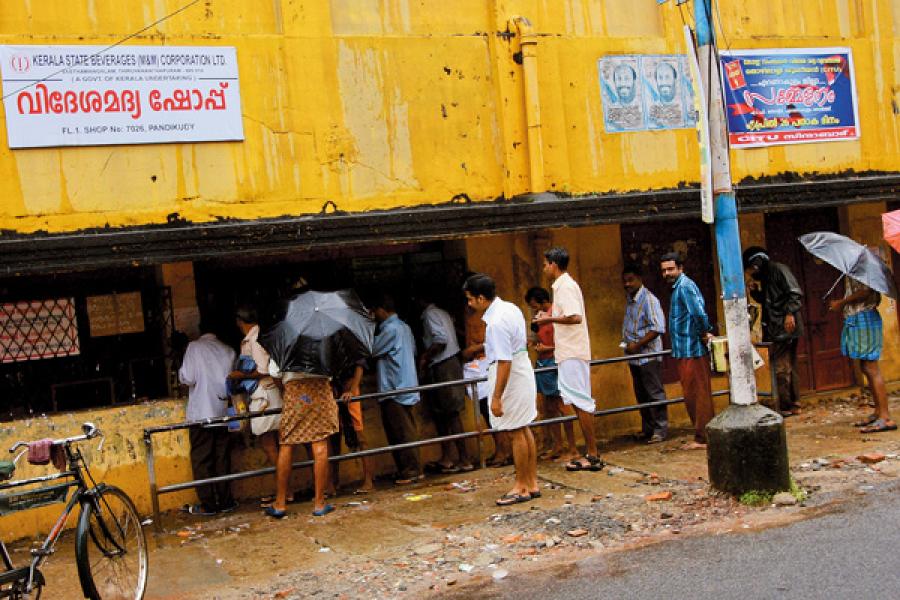 On the narrow road where Prof. T.J. Joseph lives, people leave their gates open to give drivers space to turn their vehicles around. The street leads to a school campus and several large houses set amidst lush greenery. This is Muvattupuzha, in Ernakulam district, Kerala, about 20 km from Thodupuzha, where Joseph used to teach Malayalam at Newman College.

A little over a year ago, Joseph was in trouble. A question paper he set for B.Com students had a surly conversation between God and a character named Muhammed. Joseph says he wasn’t referring to the Prophet but to Kunju Muhammed, from whose book the passage was extracted; some Muslim radicals, though, were not convinced, and accused him of blasphemy. His college suspended him. There was a police inquiry, and a couple of assaults, so the professor was on his guard.

Then, one Sunday, when he was returning from church, eight men stopped his car. They pulled him out, threw him to the ground, and then chopped off his right hand at the wrist.

Since the horrific incident, Joseph has turned to his family, to his friends and to his faith for strength. Though his right hand has been sewn back into place, padded by flesh from his thighs, it’s non-functional for most purposes. He has learned to write with his left  hand (and has, in fact, begun writing his autobiography).

He doesn’t have his job back, though, and the policemen stationed outside his house are a constant reminder that danger lurks.

To him, Kerala today isn’t like the place he grew up in. People were always religious, but back then one’s faith was never allowed to interfere in friendship, work, politics or even in celebrating festivals. Today, however, religiosity has taken on an aggressive, even violent form. “The atmosphere all around has led to the misunderstanding. I know I did nothing wrong.”

Religious polarisation is just one of the many problems plaguing modern Kerala. Crime is shooting up. Police records show that last year, 617 women were raped, up from 500 in 2007. This year threatens to be even worse. In the first six months alone, there have been more than 540 rapes. Kerala’s crime rate is higher than the national average, as is the suicide rate (with just about 3 percent of the country’s population, it accounts for 10 percent of all suicides, according to the National Crime Records Bureau). Drawing room conversations invariably turn to youngsters joining gangs to make money. Then there is alcoholism; its effects are everywhere: Road accidents, domestic violence, street fights.

Apathy about politics and governance is increasing, art is suffering too. “These days, it’s not that easy to make the kind of sophisticated movies that used to define Malayalam cinema. For us, they were an extension of literature,” says film director Shyamaprasad, whose Agnisakshi won a national award for best regional film.

Ranting about the moral decay of Indian society is a national hobby. But Kerala was supposed to be different.

Blessed by history and progressive policies, the Kerala model of development was marked by high human development indicators, with education and health indicators on par with developed countries. It seemed just a matter of time before the state’s economy would shift into top gear too. Chief Minister Oommen Chandy, introducing Kerala’s Human Development Report in 2005,  spoke about a “high road” to development emerging out of a “virtuous cycle” set off by the emphasis on human welfare. It was not an unreasonable goal; economists like Yasheng Huang have attributed China’s growth to social sector investments made in the 1960s and 70s.

Here’s the irony. The reasons for rising social tensions can be traced to the very factors that drove the state’s economic growth, even to the long-standing achievements in human development. Armed with literacy and education — and the networking and awareness that go along with it — and  faced with a lack of opportunities within the state, many Keralites took up jobs outside the country, especially the Middle East, making the state a ‘money order economy.’ In Kerala, one is never far from a Western Union outlet, or at least a billboard referring to NRIs (non-resident Indians).

Gulf money triggered conspicuous consumption, instilling a sense of inequality among those who stayed back. Once, south Kerala was prosperous, the north was not. It took just a generation to achieve intra-state equality in human development indices. But the new rich and their Gulf money-fuelled prosperity changed all that. “Today, Kerala is not as equal a society as it used to be, and inequality leads to social tension,” says K.N. Harilal, associate professor at the Centre for Development Studies, Thiruvananthapuram. 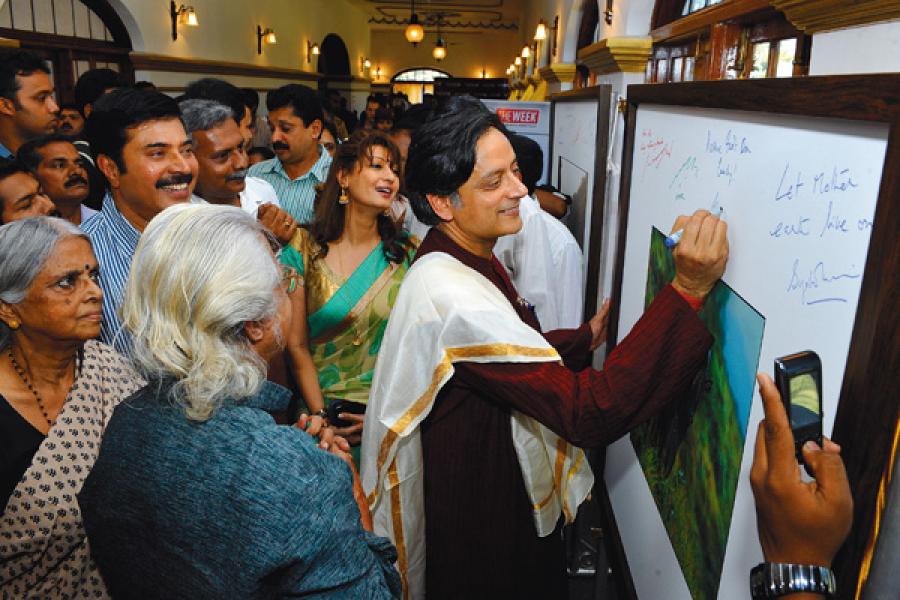 Image: Hornbil images
Culture Noveau Shashi Tharoor, Mammooty, Adoor Gopalakrishnan and Sugatakumari at the Hay Festival, Thiruvananthapuram, part of Kerala’s attempt to define itself as a cultural hub
There is also intense pressure to keep up with the Joneses. “I call these people neo-poor,” says Dr. C.J. John, a psychiatrist at Medical Trust Hospital at Kochi, referring to those who spend more than they earn. He tells the story of a government official who came in for counselling after a failed suicide attempt. The man had taken a loan to build a house. His colleagues persuaded him to go for a bigger house; the 1,100 sq.ft. he originally planned on rose to 2,400.  The bank refused an additional loan, so he asked friends for funds. Soon, people started avoiding him. When his son had to be hospitalised, he was short of Rs. 5,000; no one was ready to lend it to him. With great difficulty he managed to raise the amount and save his son. Gutted by the experience, he consumed poison (the second most popular method in Kerala, after hanging). He failed, was hospitalised himself, and had to have surgery. As he told Dr. John the story, he smiled. “Do you know why I am smiling?” he asked. “The same people who refused to lend me Rs. 5,000 to save my son  raised over a lakh to pay for my surgery and hospitalisation.”

Others go to money lenders or shady finance companies (who often use thugs to collect from defaulters). And young men are joining these enforcers to earn extra pocket money. Can crime rates be linked to conspicuous consumption? James Vadackumchery, a criminologist who has been studying crime in Kerala for over 30 years, says no. “The problem is  no one collects the kind of data to do such analysis. The range and scope of crime have broadened so much that we don’t even have the appropriate legal provisions.”

Thiruvananthapuram’s Police Commissioner, Manoj Abraham, says things are not that bad. “We are not different from the rest of the country. The rate is high because we record meticulously. People are more aware, and they file complaints.” In his earlier posting at Kochi, he was credited with bringing down crime rates there. Still, he says law enforcement agencies can do only so much. “The results of police action can only be temporary. For a more lasting solution, you have to address the social, political and economic issues.”

Perhaps the clearest indicator is alcohol. Kerala is one of the two biggest alcohol-consuming states (Punjab is the other). Hareesh N. Ramanathan, who has just finished a study on alcohol consumption in Kerala, says, “A majority don’t have a reason to drink. It has become a habit.” His survey is revealing: Across income groups, drinkers said the more they drank, the more their social, physical and mental well-being was affected. “I get a feeling that the state is refusing to see the social costs, because it  is too focussed on the revenues that alcohol gives it.”

It’s not just the state government that puts money first; wealth has become inseparable from the definition of a good life. There is no group that feels the pain more than the elderly. Dr. John says that suicide among the aged is high. “One bout of illness throws them into depression. Many seem to believe well-paid home nurses are good enough substitutes [for family]. They aren’t. They fear a lonely death.” In Travancore, there are five-star mortuaries to preserve bodies amid perfume and music till close relatives arrive.

Rampant consumerism can cause  a longing for older, simpler ways and the need for anchors like tradition and religion. For instance, Muslims exposed to the Wahhabi brand of Islam in the Middle East bring those practices home; a couple of decades ago, burqas were rare; now they are a common sight. There is also a newfound respect for feudal ways. Some of the biggest hits in Malayalam cinema (Ravanaprabhu, Narashimham, Dhruvam) have an undercurrent of feudal values.

There are two big trends today, says politician C.P. John, who is an expert on public policy. “One is feudalisation and the other is de-politicisation. Increasingly, you see feudal way of thinking and modern way of living. That needs to change.”

Regressive thinking explains why Prof. Joseph lost his hand. But the aftermath shows that Kerala’s social sector investments have borne fruit. Joseph received a notebook full of messages from schoolchildren, messages of love for fellow human beings; expressing shock that such a heinous act could be performed in the name of religion. Joseph treasures the notebook. Another day, a young Muslim found his way to Joseph’s home. He stood at the door, tears in his eyes, and said, “I apologise on behalf of all my brothers.”