Under Jairam Ramesh, the environment ministry has earned the reputation for rigour and a willingness to engage in debate. Yet many disagree with his methods 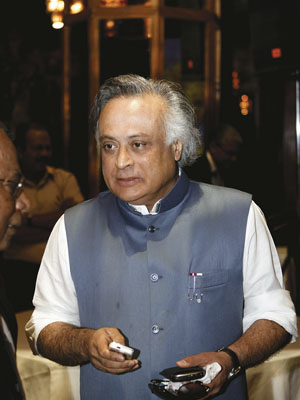 There is no doubt that Jairam Ramesh loves action. There is also little doubt that he often provokes extreme reactions. Government grapevine says that the prime minister’s special envoy on climate change, Shyam Saran, quit because of differences with Ramesh, who is environment minister. Saran is said to have opposed Ramesh’s bending India’s stance to a more accommodating one vis-à-vis developed countries at international climate change talks.
Under the silver-maned, hard-texting Ramesh, the ministry has shaken off its inherited somnolence to reposition itself as a powerful entity, quickly removing the cobwebs in regulation, bringing rigour to monitoring, having dialogues with stakeholders and building institutions to bring a scientific focus to the portfolio. With the Prime Minister behind him, Ramesh has so far brooked no opposition. His ministry has earned the reputation of being one of the most dynamic ones with unprecedented transparency and a willingness to engage in debate.
Wildlife biologist M.D. Madhusudan remembers the first meeting of ecologists and scientists just after Ramesh took charge at Paryavaran Bhavan. “I will make the decisions here. You may like some of them and you may not like some. But what I assure you is complete transparency,” he told them.
The minister kept his word. He famously replaced the wooden door to his office with a glass one. The ministry put all important documents online. Now flashes of “New” constantly blink on its home page. The quality of action, however, does not always match the frenzy on the surface.
“There is no doubt that our dialogue with the ministry has improved, but there is no substantive improvement in environment assessment and clearances,” says Kanchi Kohli of environmental action group Kalpavriksh. Kohli, who keeps a close watch on the environment impact assessment (EIA) of the ministry, says that it continues to clear projects with impunity. The ministry approved 59 mining projects within six months of Ramesh taking over. It also cleared 41 construction plans and industrial estates and 40 projects in the coal sector.