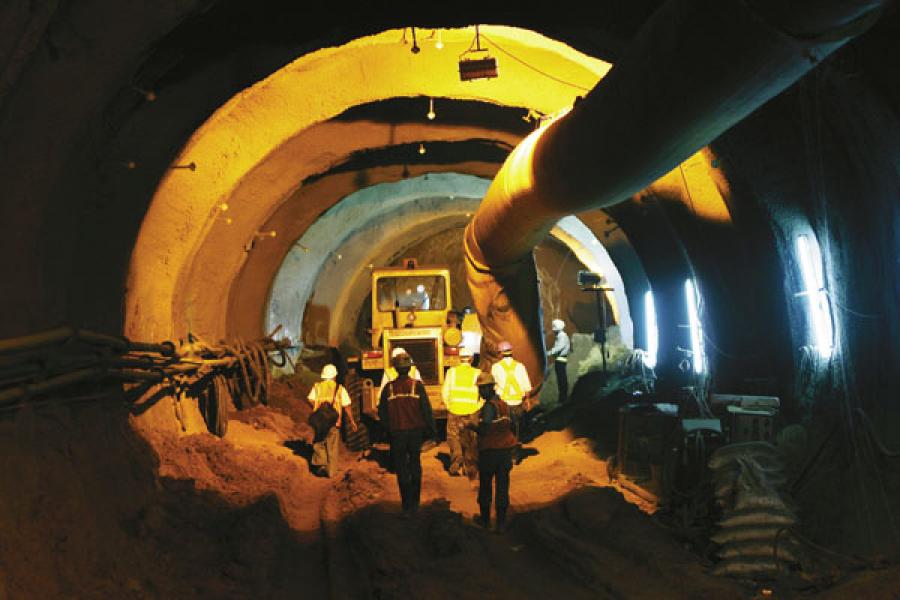 Image: Adnan Abidi / Reuters
PIPE UP: The RMRG will act as a catalyst for development along the tracks and stations

In early February, the Ministry of Urban Development finally gave its go-ahead for the Rapid Metro Rail Gurgaon’s (RMRG) metro rail project. Earlier, on August 11, 2009, the chief minister of Haryana laid the foundation stone for this project. According to Ramchand Karunakaran, chief of operations and infrastructure, at Infrastructure Leasing & Financial Services (IL&FS), physical work on the project should finally commence by May this year. Completion is expected by May 2012.

What makes this project extremely significant for India is that it is the first wholly private railway project being set up in India. Hitherto, Indian entrepreneurs could own wagons and rakes, and even supply components to the railways. But operating the railway system has remained the exclusive jurisdiction of Indian Railways, a Government of India department. The only exception is the 65 km railway line operated by Mundra Port, which is privately operated. In fact, it was this railway line that persuaded the government to finally permit Indian Railways to enter into Public Private Partnerships (PPPs) with Indian entrepreneurs for railway lines that could serve as port linkages. However, unlike the Mundra railway line, these will be operated by Indian Railways. 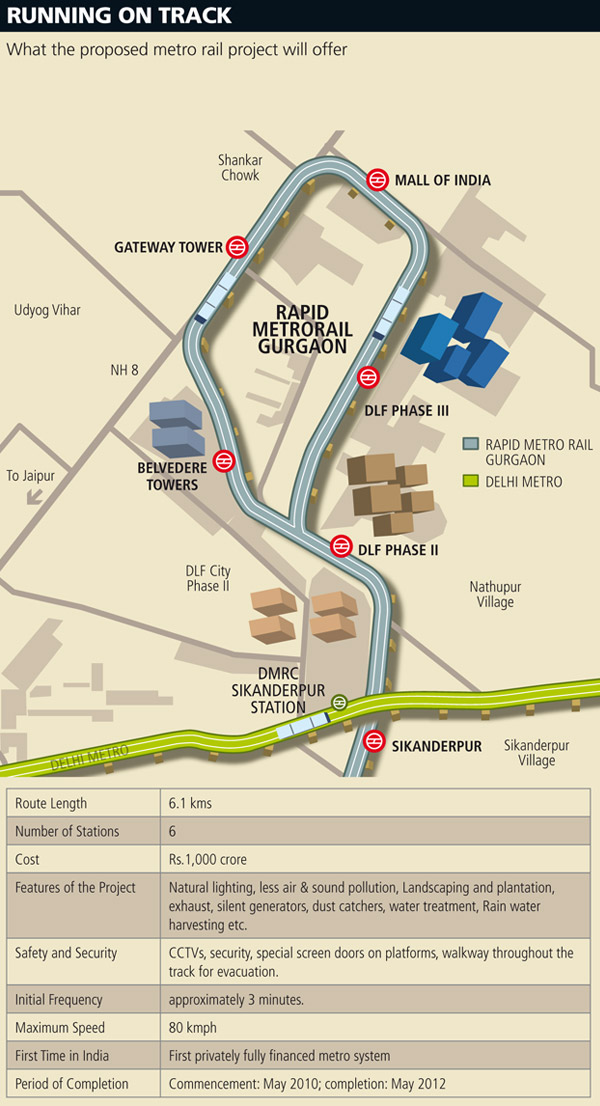 Infographics: Hemal Sheth
But what the port linkage policy did, was to create the framework for allowing private participation for feeder lines into the main railways network. Also abetting this move was the creation of the Delhi Metro Rail Corporation (DMRC). But unlike the port linkages which are partly government owned and the DMRC which is entirely government owned, the RMRG project is wholly private. The project cost is expected to be around Rs. 1,000 crore. IL&FS owns 74 percent of the equity share capital and DLF the remaining 26 percent.
For DLF getting this project going was critically significant because its largest land banks are in Haryana, as are its largest real estate projects. Having railway stations next to these projects, and giving these townships connectivity to Delhi, would immediately enhance the real estate value for DLF. It would also give residents of these townships a first-class railway system connecting them to other parts of the country. Significantly, RMRG also managed to work out a deal with the DMRC for allowing both parties to issue tickets to the stations on each other’s networks.
The railway line is significant for Haryana, which has seen the aspiration levels of its upwardly mobile population grow. Providing better amenities — malls, townships, rapid transportation systems and even railway lines — for this population is critically significant for the government. All this will also go a long way in augmenting government revenues through taxes on services and facilities provided. That was why it finally awarded the project to IL&FS-DLF on a 99 year lease; first because they were the lowest bidders when the tenders were floated in 2007, and also because it would give the state the maximum bang for its bucks.
For IL&FS, the project would allow it to set up at least 10 (maybe 12) more such projects all over the country. Two, which are on the anvil, are in Bangalore and Hyderabad. But waiting in the wings is almost every state capital. Real estate developers are pushing their respective state governments too to introduce such trains and allow for the creation of better organised townships. It would allow IL&FS to play the role of both catalyst and developer in creating more and more organised urban townships which could still remain connected to the main road and railway networks of the country.
This project would not have become possible but for the setting up of the DMRC, for which a new piece of legislation — Delhi Metro Railway (O&M) Act, 2002 — was enacted. No clearance from Indian Railways was required. In fact, the RMRG will also see its tariffs being in line with the provisions of this Act (both DMRC and RMRG will issue the same ticket), thus protecting it from charges that a public utility could begin charging extortionist rates on account of being a monopoly. DMRC will also benefit as some of its customers may want to reach these extended townships. Significantly, as the RMRG trains glide into the DMRC station at Noida, it is expected to land on one side of the platform, yet permitting the commuters to hop into any DMRC train from the other side.
Commenting on the project, A.S. Minocha, chairman, DLF Commercial Developers, said, “Gurgaon is a burgeoning industrial city and needs an efficient transportation system. While providing the residents of Gurgaon and employees their own mode of local transport, the people of Delhi, Haryana and the National Capital Region would benefit from this project. This will not only ensure an easy connectivity between the places, but also provide an easy way of commuting in less time.”
acking such a policy are the roads and aviation ministries. The Planning Commission too is in favour of clearing such projects. Kamal Nath, Union minister for Roads and Highways, has gone on record stating his preference to award large stretches of roads and highways to parties that can fund it themselves by earning money from real estate and development rights on either side of the roads.
Praful Patel, Union minister for civil aviation, too has been lobbying for such a policy for allowing at least 200 private airports to come up across India. Obviously such a policy, mooted by both ministries, will require provisions permitting both land acquisition and protection from abuse of pricing (because all public utilities are essentially monopolies).
Hopefully, it will compel Indian Railways to compete with more modern and customer friendly networks offered by private operators of metro rail systems. Anyone traveling on the local trains of Mumbai knows how traumatic and humiliating it can be for people to be squeezed into compartments, till some are left hanging out (some even fall off and die every day). Sadly, the Indian Railways prescribes a minimum area per animal when transporting them from one region to another. But no such minimum norm has been made applicable for human-beings.

Tweets by @forbes_india
A Climate Change: Jairam Ramesh Stokes Debate
A Lowdown on the Toyota Prius