Furtados, synonymous with Western music in India, has evolved and expanded to find new clients and revenue streams 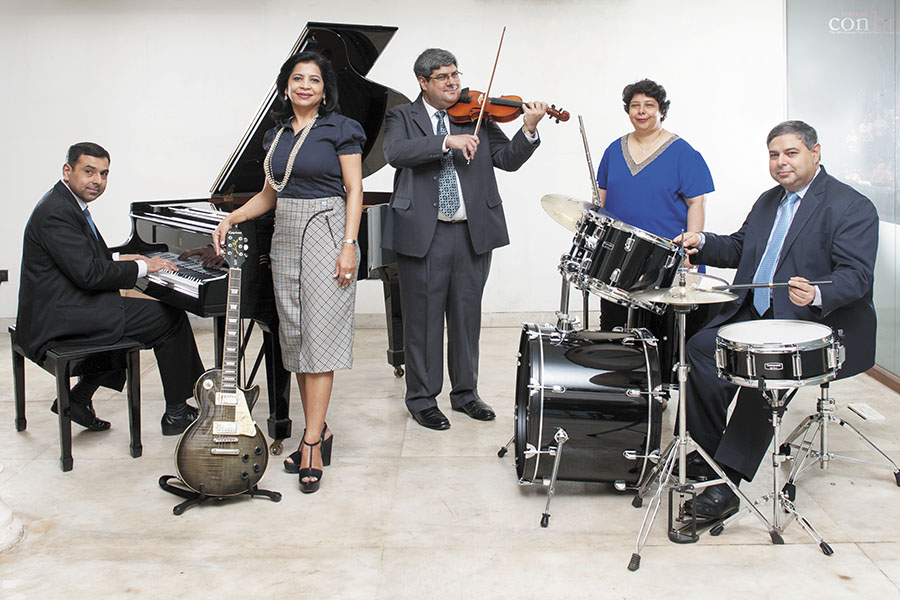 The Furtados family: (from left to right) Christopher Gomes, who looks after Furtados’ finances; Tanuja, who started the Furtados School of Music; Anthony, in charge of procurement, purchasing and overall operations; Nonabel, who looks after HR and administrative matters; and Joseph, Furtados’ marketing, IT and overseas partnerships head
Image: Mexy Xavier

As he strums chords on his guitar, Nolen Chettiar glances at his tablet every now and then. He’s logged on to Furtados MusicBuddy, a software feature that gives him instant feedback on the notes he plays and throws up a final score on completion. For the bouncy 12-year-old, it’s 85 out of 100 today. He submits his recording online to his tutor and gets back to analysing where he went wrong. “It’s fun to practise this way,” he says, eyes twinkling.

For Furtados, a brand that is more than 150 years old, this app is a story of innovation and change. One that began when John Gomes—who passed away in 2003 aged 76—laid the foundations of a business that was to become synonymous with music.

In 1953, when Gomes was 26, BX Furtado & Sons, a Christian religious supplies business established in Mumbai’s Dhobi Talao area by Goan immigrant Bernard Xavier Furtado in 1865, went up for sale. Gomes bid for it, won and, in three months, turned around the struggling business. “He was an astute businessman,” says his widow Antoinette, 72, sitting in her south Mumbai residence, running her hands over a framed black-and-white photograph of his. 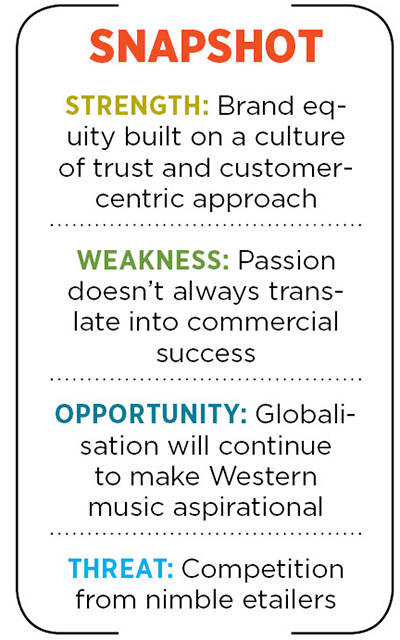 But, in a twist of fate, shortly before Bhargava sealed the deal, the employees of LM Furtado approached Gomes. In addition to the musical instruments, the company also sold items of Christian faith because of the close connection between religion and music. Since Bhargava was Hindu, the employees feared the religious supplies business would be shuttered and they’d lose their jobs; so they proposed to Gomes that he acquire the company. “They told him the music business would go well with his existing business,” recalls Anthony, 46, Gomes’ eldest son.

Despite “knowing nothing about music”—as his second son Christopher, 45, puts it—Gomes thought it to be a worthwhile proposition. He bettered Bhargava’s offer by ₹5,000, but didn’t have the money to see the transaction through. Promptly, the neighbourhood tailors—and it’s not clear why the tailors in particular—pooled in money to help him make the purchase. Extending the goodwill shown to him, Gomes bought insurance policies for each of the tailors, in case he faltered in repaying them.

“He was a very good man,” says Bhargava, 82, of his competitor and dear friend. Today, those in the know credit both patriarchs—Gomes and Bhargava—with developing the music industry in India.

But it wasn’t an easy ride. It was 1959, when Gomes saw his second acquisition through, but keeping the business afloat was a challenge. Not only was there a concerted effort to purge the country of “Western influences” after the British left, but also, in 1961, the government banned the import of music instruments. “For more than three decades, until Manmohan Singh opened up the economy [in 1991], business was tough,” concedes Anthony, who formally entered the business soon after his graduation and now looks after procurement, purchasing and overall operations.

Gomes got lucrative offers from banks for a buyout of his prime, street-facing premises but never once did he relent. Primarily because of the [music] books business, says Nonabel, 44, the third of the four Gomes siblings, who looks at HR and administrative matters. While the government banned the import of instruments, it hadn’t placed any restrictions on the import of books. Furtados had a near-monopoly in the sale of books for learning music. Students were dependent on them and Gomes felt it his duty to supply them, even if he didn’t make much money.

“Had my father not persevered with the books business, I kid you not, the music industry in India would have regressed by several decades,” says Anthony. “Virtually, every music student in India had a book from Furtados. That’s why our brand is so widely recognised today.”

To meet financial shortfalls, Gomes diversified his business. He rented pianos to families who couldn’t afford to buy them, entered the sporting goods trade and even set up a printing press at the rear end of the BX Furtado shop. He printed diaries and examination papers for 45 to 50 schools and grew to become one of the largest printing presses in the city, claims Anthony.

By the time the Indian economy was liberalised in 1991, the family had shuttered all ancillary businesses to focus on music, which they operated from three storefronts—two in Mumbai, and one in Goa. They sought to forge partnerships with the instruments makers such as the American-German piano makers Steinway & Sons and Japanese electronic instrument maker Yamaha to import and sell their instruments in India, but those heavyweights weren’t interested in selling through such a small set-up. That prompted the Gomes’ to establish a distribution business, and over the next several years they brought big brands into the country and supplied their instruments to various retailers. “By the early 2000s, we were really in our prime,” says Joseph, 42, the youngest sibling, who looks into marketing, IT and overseas partnerships. So much so that 80 percent of Furtados’ business came from the 400-odd dealers it supplied to across India. 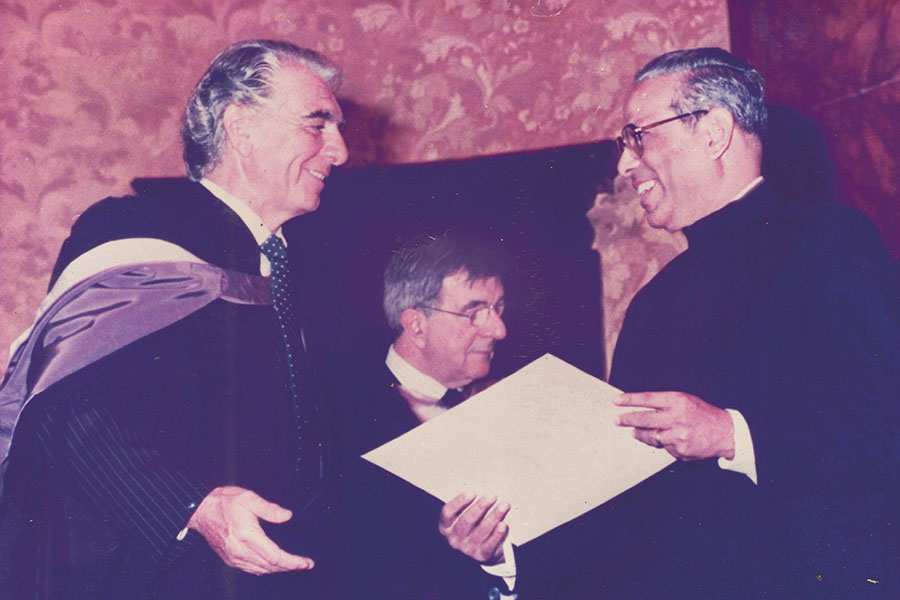 John Gomes, the late Furtados patriarch, receiving his honorary membership of the Trinity College of Music, London, in recognition of his services to music in India
But soon enough the Gomes’ realised that their dealers’ ambitions didn’t match up with theirs. “We wanted to market more to bring more customers into the fold and grow the music industry in India, but, regrettably, our expectations weren’t being matched,” says Anthony. So the family decided to set up its own retail presence.

Through a major restructuring in 2007, they did away with the partnership firm that BX Furtado and LM Furtado were run under, and established Furtados Music (India) Private Ltd, and took on debt to expand. At one point they had 20 retail outposts as well as three franchised stores across India—from Jalandhar to Bengaluru—riding on the assumption that globalisation and consumerism would make the pursuit of Western classical music aspirational.

Furtados also ventured online around the same time, selling on its own website and later on Amazon. While it has been a “great channel” to reach distant regions in, say, the north east of India, it only accounts for about 4 to 5 percent of sales, says Christopher, who oversees finance. Books, guitar picks or keyboards that can be “easily boxed” sell well online, but guitars for instance need to be strummed before they are bought. They don’t expect online sales to ever exceed more than 20 percent of the total. “It’s just the nature of our business,” he shrugs.

Despite working capital and inventory management challenges, especially in the offline business (consider stocking grand pianos until they are sold, or waiting for two to three months until a new consignment is shipped), Furtados grew at a compound annual growth rate (CAGR) of 25 percent between 2003 and 2013, claims Anthony.

“ If you can have a curriculum for history, Hindi or maths in [regular] schools, why not music?”

But, by 2014, the latent demand had been met and sales started plateauing. Non-remunerative stores were closed down. Furtados now owns and operates 17 stores across India and still holds more than 90 percent of the market for music books. This ₹94-crore (revenue) music and distribution arm of the business is on track to hit the ₹100-crore mark in FY18, says Anthony. But to further grow the business, more needs to be done “infrastructurally”, he says. “We needed to energise music education in the country.”

Towards that end, while Furtados School of Music (FSM) has been running its own centres since 2011, it got a thrust in 2014. “We realised that there was no graded curriculum for music in [regular] schools. If you can have a curriculum for history, Hindi or maths, why not music? That’s when we started our school proposition,” says Joseph’s wife Tanuja, who headed HSBC’s wealth management (NRI) business in Singapore before moving to India to set up FSM along with her ex-colleague Dharini Updhayay.

The two partnered with experts to create a pre-primary and K-12 music education curriculum and have since then forged partnerships with 85 schools in 11 cities across India—from Akola in Maharashtra to Delhi—to impart music education to students.

Schools provide the space, FSM the teachers and instruments, and students pay around ₹7,000 a year. While some, mostly international-board schools, have made FSM’s tutorials mandatory for their students, others have it as an option. Moreover, after school hours FSM uses the premises to conduct music lessons for the public. “A music revolution is underway in Akola,” says Father Mathew Karickal, principal of Mount Carmel School, Akola. Ever since the FSM centre was set up in the school in July 2017, not only are students benefitting from a more holistic development, but the general public also has access to quality music education, he says.

Going forward, technology will lead the way. Consider 12-year-old Nolen who uses Furtados MusicBuddy to up his guitar-playing skills. He found his tutor on High, an app that lets students find FSM-trained and certified teachers in their vicinity. Already 500 students and 300 teachers in Mumbai, Delhi and Bengaluru use High, along with Furtados MusicBuddy. Students enter their requirements into the app, High throws up names of teachers and prompts the student to set up a demo class. Once classes are fixed, students pay between ₹650 to ₹3,000 an hour, and FSM makes money by charging the teacher a commission.

Already FSM—which is profitable with ₹13 crore in revenue currently, according to Tanuja—has touched 25,000 students through its centres, schools and app. “The challenge now is to scale up while keeping the quality intact,” says Deepak Shahdadpuri, founder of DSG Consumer Partners, which led an undisclosed Series A funding in FSM in 2014. Most recently, another $3 million was raised, led by DSG and other investors.

As this “revolution” pans out, the students that FSM creates will, in the long-term, help grow Furtados’ retail and distribution business. “Though that isn’t why we’re doing this. We really do want to build the infrastructure for music in the country,” says Anthony.

The intense pride that he and his family feel for the business is hard to miss. Yet it is finding that sweet spot between purpose and profit that will determine Furtados’ trajectory in time to come.

Tweets by @forbes_india
Ernie Garcia: The big wheeler
The rise and rise of family firms