Does eating together improve negotiations?

Who you share your table with may add or detract value

By Alena Komaromi and Horacio Falcão 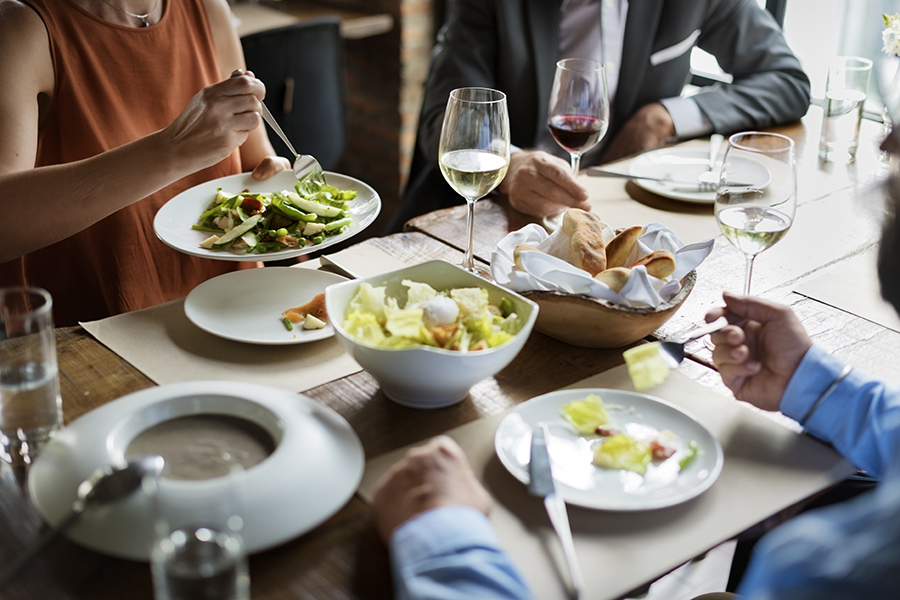 Image: Shutterstock
Sitting down to a meal to talk business, like drinking while negotiating, is common practice around the world. There is probably not a single executive or public official who has never negotiated over a meal. Because eating is such a salient part of our lives, we need to look at how food can influence negotiation.

Researchers have recently started to examine the act of eating together while negotiating and its impact on the final deal. While most of us would expect that sharing a meal would positively affect our negotiation outcomes, the findings point to a more nuanced and strategic choice. Indeed, the effect of food and its presentation on negotiation outcomes can vary depending on individual circumstances.

A paper by Cornell University’s Kevin Kniffin, Brian Wansink, Carol Devine and Jeffery Sobal delved into the shared food experience of firehouses, which have a special culture of cooking and eating together because of firefighters’ long shifts. The study found a strong positive correlation between firefighters eating together (workplace commensality) and their group performance. However, cooperation among officers only increased when they cooked together; sharing the pleasure of being around a table and eating together had no influence. This leads us to believe that improved cooperation is most likely not the reason why food sharing could lead to better negotiation outcomes.

Negotiating joint venture deals
“Should You Eat While You Negotiate?” by Lakshmi Balachandra from the Harvard Kennedy School of Government reports the outcomes of several experiments with 132 MBA students role-playing a joint venture negotiation.

The first experiment compared a group that negotiated over a meal in a restaurant with another that negotiated in a conference room without food. Another experiment looked at two groups negotiating in a conference room, one with a shared meal and one without. The groups that ate together respectively generated 12 percent and 11 percent more profit than the ones that didn’t break bread together.

Encouraged by her findings, Balachandra designed a third experiment with 32 MBA students to ensure that it was not merely engagement in any collaborative task together (i.e. eating vs. solving a problem together) that led to better negotiation outcomes. In this experiment, rather than eating, half of the participants negotiated while completing a jigsaw puzzle together. No difference in profit or trust levels was found between the groups.

When negotiators eat together, the joint nature of this separate task does not seem to be what improves negotiation outcomes. Instead, Balachandra believes there is a biological explanation. Eating together increases glucose levels, which leads to better self-control, decreased aggression and regulated prejudice. These side effects positively affect negotiation outcomes. Based on other studies, she also believes a second explanation: While individuals eat together, they engage in mimicking or enacting movements that lead to pro-social behaviour and induce positive feelings about the other party. Both explanations are plausible, yet they rely on increased cooperation following commensality as the reason for better outcomes. However, the firefighters’ study rejects the role of cooperation while eating as the cause of better negotiation outcomes… So where do we stand on this issue?

The element of uncertainty
A third study from Margaret Neale (Stanford University) and Peter Belmi (now at Darden School of Business, University of Virginia) may clarify the issue. Their experiments were broken down into competitive and cooperative negotiations that involved food sharing as well as just food consumption. The researchers also served savoury (chips and salsa) or sweet food (apples and caramel sauce) to see if the type of meal had any effect on negotiation outcomes.

In competitive negotiations, food sharing was expected to generate uncertainty as competition is associated with power moves, manipulation and deception – a sharp contrast to the warm feelings associated with shared meals. This element of uncertainty would likely make negotiators more alert and mindful of asking value discovery questions (leading to value creation opportunities). Conversely, in cooperative negotiations, food sharing was expected to introduce ‘sleepiness’ into the process as parties already feel secure due to the cooperative framing. As a result, food sharing would reduce their alertness and motivation to go the extra mile in terms of value discovery or better deal creation.

The researchers found that competitive negotiations (merger deals) while food sharing produced the highest negotiation outcomes, motivated by the high level of uncertainty. Cooperative negotiators who shared food, on the other hand, reported decreased levels of uncertainty and inferior value deals compared to competitive or control groups without food sharing. Finally, savoury or sweet meals did not make a difference in the outcomes.

So, according to the last paper, uncertainty introduced by food sharing practices in competitive negotiations makes parties negotiate with the value creating goal in mind. For the practical purpose of maximising value creation, this means that you must be thoughtful about sharing a meal with your business counterpart. If your counterpart has a competitive reputation or there is a conflict or impasse, it may pay off to have your negotiation over a shared meal with dishes placed such that everyone can serve themselves: Spanish tapas, shared Asian dishes or Ethiopian fare, for example. If, on the other hand, your negotiation is expected to follow a cooperative path, stay away from the food sharing because it may reduce your awareness and alertness and, hence, lead to sub-par value deals.

For serious foodies, this does not mean, however, that one should abstain from having a meal altogether while negotiating; merely making separate individual orders or maintaining a level of alertness should help alleviate any concerns over decreased uncertainty and help parties stay focussed on maximising mutual outcomes.