Space: the final frontier—for learning how to keep your team motivated during extended periods of isolation and confinement. 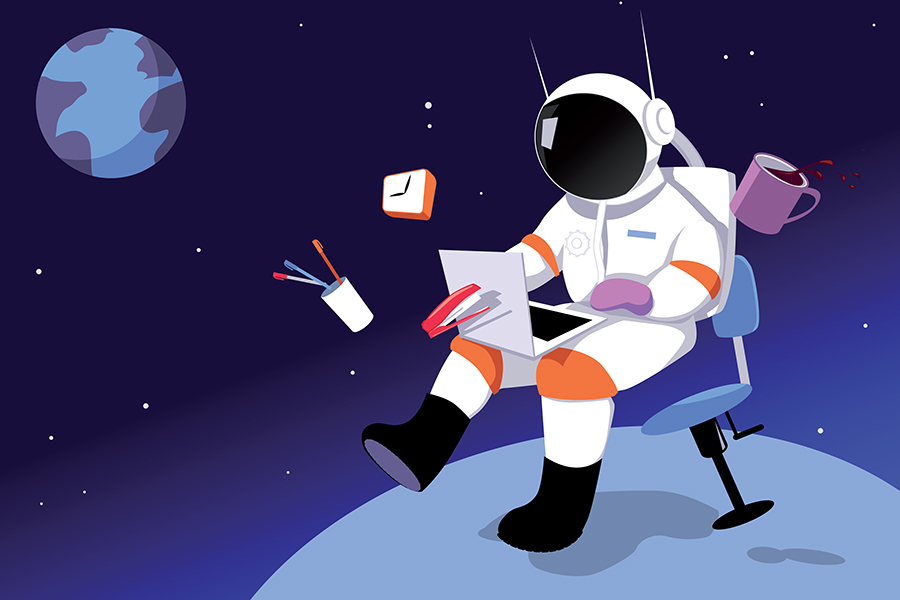 Editor’s note: This is part of a series of articles based on Kellogg Executive Education webinars focused on COVID-19 and crisis management.


What happens to teamwork during extended periods of isolation and confinement?

While that sounds like a question tailored for much of today’s housebound workforce, it’s actually a research topic that professors Noshir Contractor and Leslie DeChurch have studied in an entirely different context: space travel.

The researchers never thought “that we would be drawing conclusions from space teams to our teams here on Earth,” DeChurch says.

But they did just that during a recent webinar from Kellogg Executive Education. Contractor, a professor of management and organizations at Kellogg, and DeChurch, a professor in Northwestern’s School of Communication, discussed their research with NASA and shared some insights that workers and leaders can use to help remote teams function cohesively.

For example, astronauts are acutely aware of their organization’s lofty goals and how their own individual efforts fit into that. So even when the task is mundane—such as practicing putting away tools one more time—they have a clear sense of how that work fits into the bigger picture.

Leaders here on Earth should likewise ensure that all of their employees understand how their work, however high-minded or mundane, fits into the organization’s goals. This is particularly important, Contractor says, if you’re onboarding a new employee.

“Talk to each of them at some length about what the bigger picture is, what the dream is, what the vision is, and why what they are doing is a significant component within that,” he says. “As a leader, it is really one of the most important things you can do.”

Contractor and DeChurch also advised leaders to be aware of the “third-quarter phenomenon,” the idea that teams, whether on football fields or space stations, tend to see slumps in mood and motivation in the third quarter. So team leaders need to manage those slumps, perhaps by offering more support, introducing new routines, or weaving in some light-hearted moments where humor can help restore people’s energies.

But, in the midst of a continuing crisis like COVID-19, how do you know when the third quarter has arrived? After all, few remote workers know when their offices or their children’s schools will reopen.

Contractor says this unknown actually doesn’t matter that much. “If we don’t have [a timeline] we make one up in our minds and we use those as a way to pace ourselves,” he says.

DeChurch explains that leaders need to recognize the importance of having the whole team working on the same clock, even if it’s “a manufactured clock, and to recognize explicitly when it needs to be changed.” This could mean working toward a particular reopening goal, even if it ends up needing to be pushed back. At least that way the full team knows what the timeline is and will sync up their “quarters” accordingly.

Another lesson from space: crews do not like being micromanaged remotely.

Contractor told the story of the U.S. Skylab crew, which in 1974 rebelled against mission control.

“The crew was so completely frustrated with the structured tasks they were given,” Contractor says, that they simply shut off communication with mission control for a period of time. “It’s referred to as the first mutiny in space, or the first strike in space.”

The issue, DeChurch says, is that leaders and their team members can “have misaligned needs” when working remotely. Leaders want to regain some of the control that they’ve lost in not being able to see work being done, while their staff want a sense of autonomy in their work, which makes it feel more meaningful to them.

“It’s important to recognize that this discord can happen,” she says.

You can watch the full webinar here and see previous articles from this series here.