There are greener approaches to climate control that do not require electricity. Whether with terracotta or bamboo, these cooling techniques often rely on age-old, but no less effective, ideas 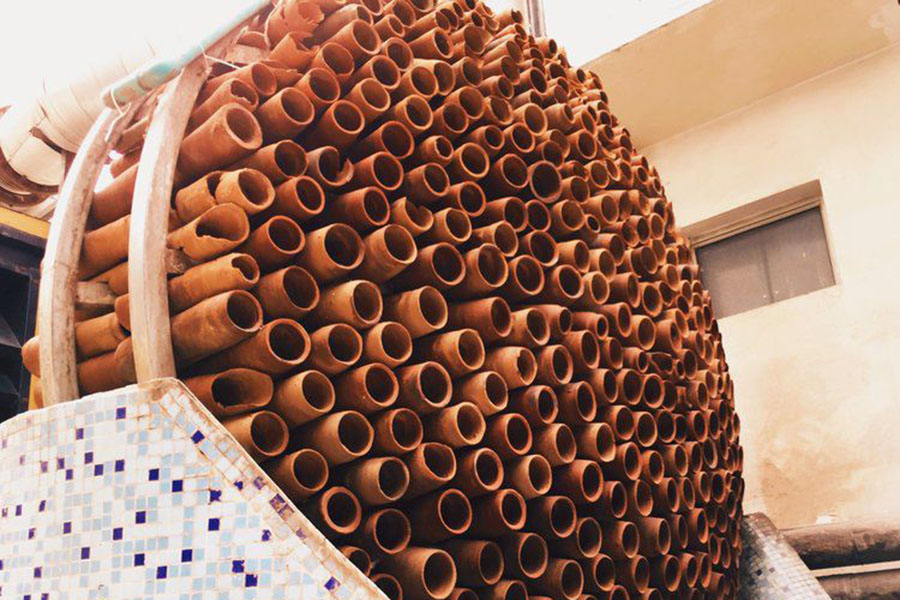 Indian architect, Monish Siripurapu, has designed an air con system based on a traditional Indian clay-based cooling technique, and inspired by the structure of a beehive. Image: Courtesy of Ant Studio

With energy savings on the agenda, the question of air conditioning is the focus of much attention. Take, for example, the controversy surrounding the air conditioning of open-air stadiums in Qatar, where the soccer World Cup will take place in November. However, there are greener approaches to climate control that do not require electricity. Whether with terracotta or bamboo, these cooling techniques often rely on age-old—but no less effective—ideas.

Designer Yael Issacharov has developed an air-conditioning system made of terracotta tiles that she calls Nave. She was inspired by the Palestinian Jara, a traditional clay water container that is hung from the ceiling to cool water and cool the air. Specifically, the water contained in the hollow internal structure moves outward through the porous clay walls. With the heat of the air, it evaporates and is transformed into water vapor. This reaction absorbs heat from the surrounding air, cooling the water, the material itself and consequently the air in the room.

The whole system works without electricity or electronics and is available in several forms: as a wall tile, as a partition or a vertical column. This air conditioning system, which produces no polluting emissions, is one of the winners of the "A'Design Awards" 2021-2022.

In France, a company called AREP has designed a prototype air conditioning system made from bamboo. This natural material is finding more and more uses in the West, like for making bicycles. This tower-shaped cooling system is made up of poles through which water flows with gravity. A blower in the center then captures the hot air from above and cools it by passing it over the water.

To achieve this result, AREP was inspired by Vietnamese artisanal techniques. "To evaporate, water needs energy which is ‘absorbed’ from the heat of the ambient air, thus generating the cooling effect," the firm explains. The prototype was a prize-winner at the 2021 Seoul Architecture and Urbanism Biennale. It is comparable to a body of water in a park in summer: the closer you get to it, the cooler the air seems. For the moment, AREP has only tested its prototype in the city of Hanoi. According to the firm, this natural air-conditioning made it possible to lower the temperature by 6°C around the device.

Tweets by @forbesindia
How particle physics is pushing cancer treatment boundaries
Photo of the day: Celebrations against the odds