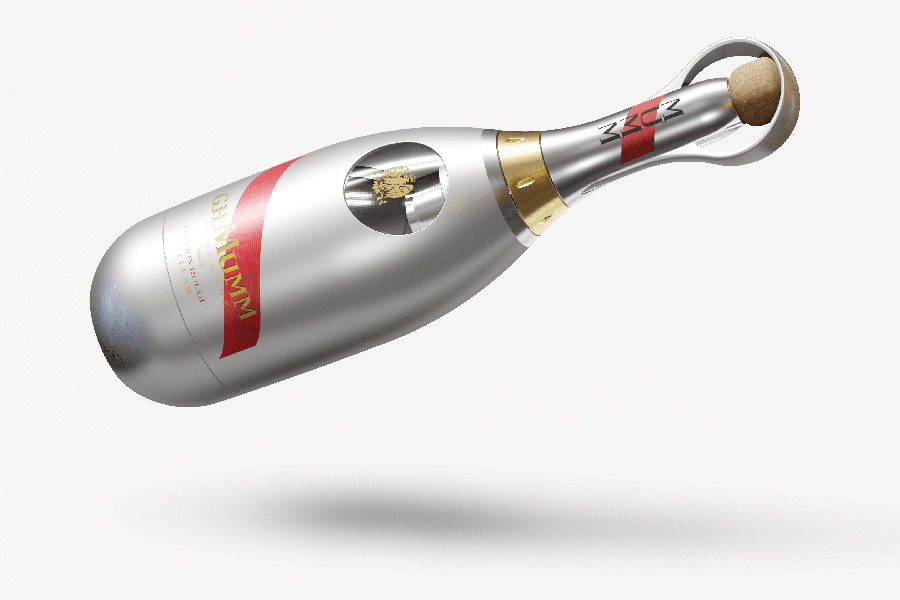 Mumm has concocted a champagne adapted to weightlessness. Image: Courtesy of Stellar

On an upcoming mission of Axiom Space—which offers 'astronaut customers' private space flights—the shuttle will be transporting more than just space explorers. An unexpected shuttle-mate will accompany the crew: Mumm champagne. The Reims, France-based company has decided to send its famous elixir, which symbolizes celebration and the art of living, into space. According to the head of Axiom Space, Mumm bubbly could be on board starting in 2023.

Perhaps you're wondering what champagne sent into space tastes like? Astronauts should be warned: the famous "pop" you hear when you open the bottle will be less pronounced than it is on on Earth, outlined Octave De Gaulle, the founder of the SPADE agency, which designs space objects. Alongside the other players involved in this futuristic project, including France's Centre National d'Etudes Spatiales (CNES), the young designer presented the bottle that will be on board human space flights and eventually on Axiom's commercial space station. Elegantly sheathed in an aluminum shell, the bottle is in fact a half glass bottle, secured by a stainless steel device to open and close it. Above all, the bottle features a long neck that ends with a cork and a ring designed to withstand the constraints of spaceflight.

To fill this specially designed bottle, which can be reused over and over again, Mumm used its iconic Cordon Rouge champagne, with a few modifications to adapt to tastings in zero gravity. In space, the sense of smell is altered, taste sensations are different and above all the bubbles no longer rise to the surface. Instead, a frothy foam comes into contact with the lips and mouth.

In order for the space tasting to be a success, cellar master Laurent Fresnet reinforced the complexity as well as the intensity and fruitiness of the champagne. To do this, he opted for a champagne that had been aged for five years in the cellar, whereas the same champagne usually is only aged three years. Meanwhile the liqueur de dosage, which allows the champagne's sweetness levels to be adjusted, more or less, was aged in oak barrels in order to bring vanilla aromas.

So what does champagne taste like in space? At Mumm, it's a bubbly wine with flavors of vine peach, ripe yellow fruit and hazelnut.

Tweets by @forbesindia
How many ants are on Earth? 20 quadrillion, study says
UK government introduces new bill to seize, freeze and recover crypto