In South Korea, alcohol companies are looking to pop culture to boost sales

Now that attitudes to alcohol consumption are changing, particularly with younger generations, alcohol manufacturers are teaming up with entertainment companies to win over this demographic of consumers 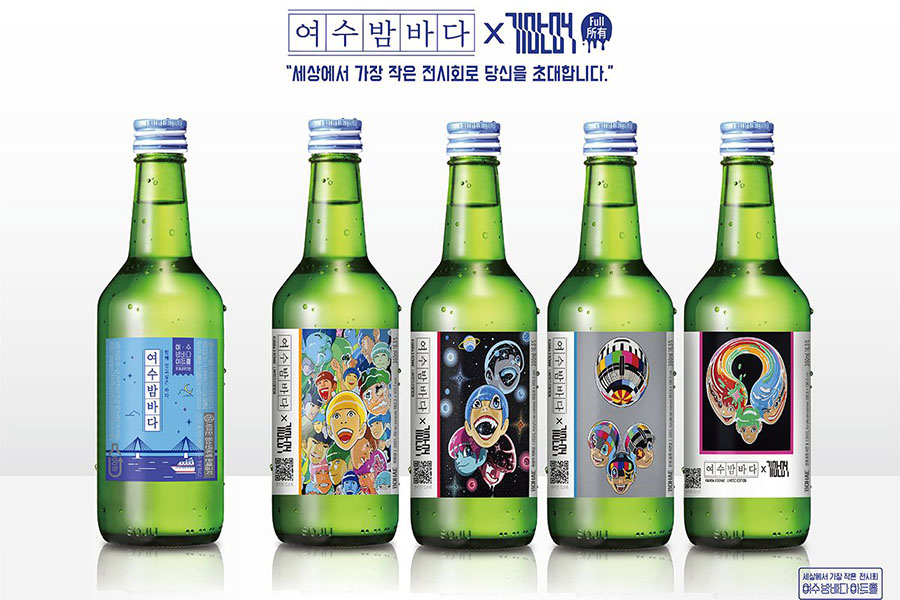 Bohae has partnered with Kian84 to create a new line of soju. Image: Courtesy of Bohae

Alcohol consumption in South Korea has traditionally been part of work culture. For many years, employees were regularly invited to drinking parties by their superiors. Now that attitudes to alcohol consumption are changing, particularly with younger generations, alcohol manufacturers are teaming up with entertainment companies to win over this demographic of consumers.

Corporate culture in South Korea has long encouraged the practice of "hoesik," compulsory alcoholic outings with colleagues that could last until late at night. But the relationship between Koreans and drinking has changed in recent years. Gone are the days of institutionalized drunkenness with one's boss: the country's youth is trying to maintain a better balance between private and professional life, while consuming (somewhat) less alcohol.

However, people living in the home of K-Pop remain big consumers of alcohol.. Alcohol-related spending rose 8.3 percent in 2021 compared to the previous year, according to a report by analysis firm Fitch Solutions. This is despite restrictions and temporary closures of drinking establishments related to the Covid-19 crisis.

One of the reasons for this is the practice of  "homsul," the trend of drinking, usually alone, at home. This phenomenon, particularly widespread among young Koreans, has had an impact on their preferences in terms of alcohol. A particular favorite is fruit wines. More original than its grape cousin and more fashionable than fruit liqueurs, they are very popular in Asia. And even more so since the start of the pandemic. "The consumption of [liquors such as] fruit wines is changing from a drink enjoyed on special days to a drink enjoyed at home, alone or sometimes with family," South Korea's Ministry of Food and Drug Safety said in a statement relayed by Food Navigator.

Despite this, the alcohol industry is working hard to win over millennials and even Generation Z. They are worried that young Koreans will gradually turn away from alcoholic beverages to take care of their health, as is being seen in the US, the UK and even Japan. So the industry is banking on pop culture to convince them, once and for all, of alcohol's "cool" potential.

Bohae, a Mokpo-based spirits group, recently partnered with hit webtoon creator Kian84 to create a new line of soju. The limited edition bottles, titled "Yeosu Night Sea," are described by the liquor maker as "the world's smallest exhibition." Their labels feature Kian84's drawings of some of his most iconic characters.

Alcohol aficionados can scan the QR codes on them to find out more about this artistic collaboration, which is a communication coup. Many wine and spirits brands have become accustomed to collaborating with creators from all walks of life—painters, designers, stylists, street artists, musicians— to increase their visibility among young consumers who are passionate about culture.

Another tactic the alcohol industry is using to draw in young consumers is celebrity investment.  An example is K-pop singer-rapper Jay Park, who launched Won Soju Spirit, the second product by his own liquor brand, in July. The first one, Won Soju, was a huge success: 20,000 bottles of this Korean rice alcohol were sold in February during the first week of its launch, according to the Korea Times.

Jeju Beer Company, South Korea's leading craft beer maker, hopes to create a similar buzz with AOMG Our Ale. This collection of "musical" beers was created in partnership with record label AOMG. Each can of this limited edition features a QR code giving access to playlists featuring the label's artists like Simon Dominic and Lee Hi. Providing a soundtrack for a beer just may be a pleasing idea to young South Korean consumers.