Craft distillers, who have dedicated their lives to the process, aim to safeguard mezcal's future with measures including seed banks and efforts to showcase artisanal methods 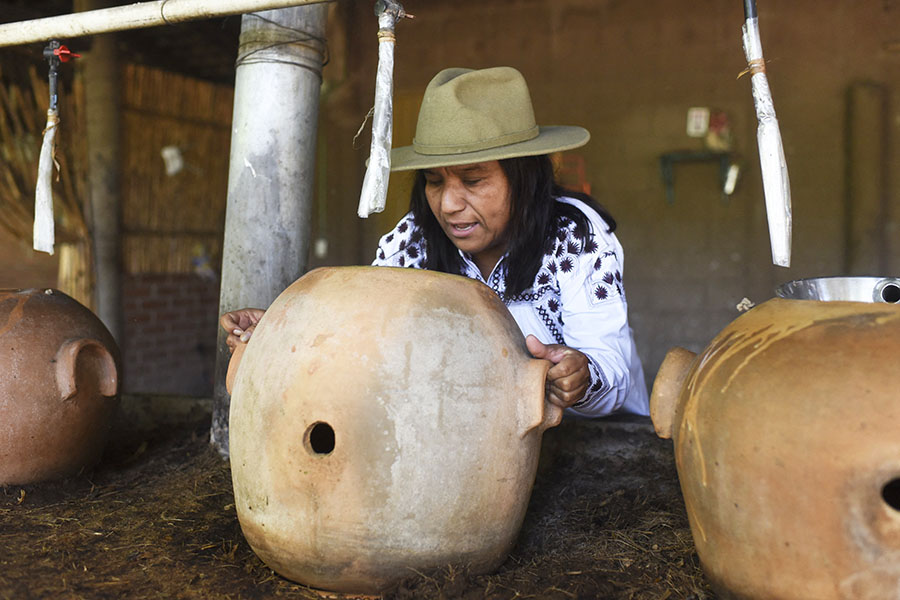 With just a look, Sosima Olivera knows when her cherished agave plants will be ready to make mezcal, tequila's lesser-known Mexican cousin whose fast-growing popularity is raising fears of overexploitation.

The mezcal boom means a greater need for the land, water and firewood used to produce the smoky spirit, said Olivera.

"This excess demand from national and international markets has consequences. If more plants are needed, of course there's more exploitation," said the 50-year-old, who heads a producers' collective.

Craft distillers like Olivera, who has dedicated her life to the process, aim to safeguard mezcal's future with measures including seed banks and efforts to showcase artisanal methods.

"A bottle sums up everything we've done for years," she told AFP while touring a field in Mexico's southern state of Oaxaca where magueys—a type of agave plant—grow slowly under the sun.

Once drunk only in small Mexican communities, mezcal has enjoyed a surge in demand, both at home and abroad.

It is traditionally sipped neat, accompanied by slices of orange and salt mixed with dried chiles and ground agave worms.

Nowadays it can also be found on the menu in fashionable cocktail bars from New York to Tokyo.

Celebrities who have jumped on the bandwagon include the co-stars of the hit television show "Breaking Bad," Bryan Cranston and Aaron Paul, who founded the drinks company "Dos Hombres."

No maguey, no mezcal

The value of Mexico's mezcal exports skyrocketed from nearly $20 million in 2015 to around $63 million in 2020, according to official figures.

The United States, Canada, Spain, France and Germany are among the top consumers of the drink, which is produced in several Mexican states, but above all in Oaxaca.

Although mezcal and tequila have similar production methods, some important differences set them apart.

Tequila is made with blue agave in the western state of Jalisco.

Mezcal uses other types—including highly prized wild magueys—some of which take 15 years or longer to mature.

For that reason, producers such as Graciela Angeles believe it is crucial to preserve the plants for future generations.

"What will happen to biological diversity? There are very few efforts to conserve these species," said the 43-year-old creator of the "Real Minero" brand.

"Without magueys there's no mezcal," added Angeles, who keeps seeds to ensure the plants will still exist for her children to harvest one day.

The complex process of mezcal production hinges largely on the distiller's talent and sense of smell.

But with the arrival of deep-pocketed corporations, high-volume producers have become little more than "assembly plants" blending mezcal from different communities, Angeles said.

On average, a 750-milliliter bottle costs about $40 in Oaxaca, but the most exclusive varieties have a price tag of more than $100.

In the United States, a limited edition bottle of "Dos Hombres" mezcal made from tobala agave sells for more than $300.

The mezcal produced by Olivera and Angeles is the result of a painstaking process dating back several generations—something they are determined will live on.

Both women organize tastings to showcase the flavors and aromas of their products.

In the city of Oaxaca, mezcal tasting has become a must-do for many tourists.

Australian visitor Christopher Govers said he had learned all about the spirit "after falling in love with the taste and the effect."

"The history and culture behind it is connected with the taste," he said at a bustling trade fair, where an illuminated sign read "Make Mezcal, Not War."