Spotify, Apple Music, Deezer and others have recently revealed the ranking of the most popular artists according to their users. Some names come up repeatedly 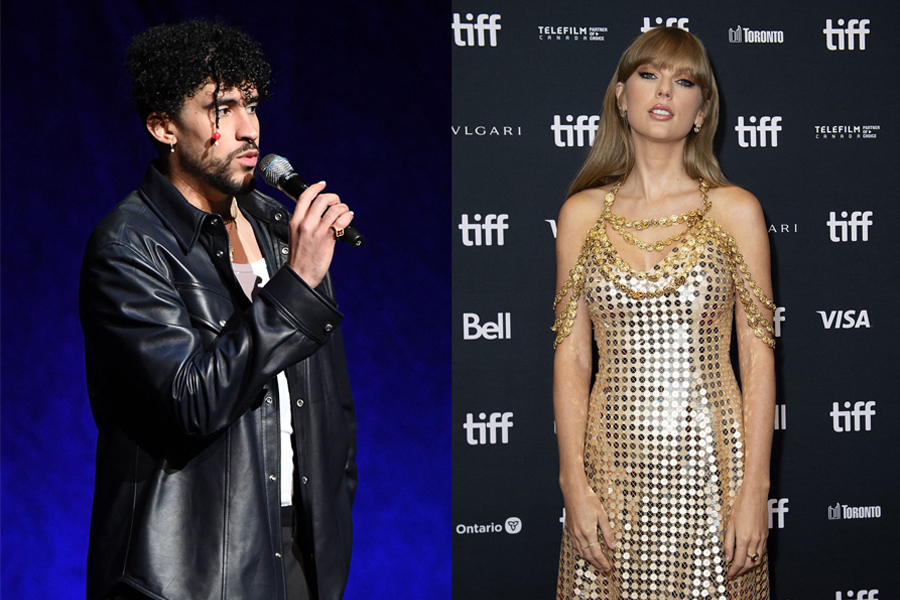 Bad Bunny (L) and Taylor Swift (R) are among the most listened-to artists on streaming platforms in 2022. Image: Valerie Macon / AFP

As the end of the year approaches, it's time for music streaming platforms to take stock. Spotify, Apple Music, Deezer and others have recently revealed the ranking of the most popular artists according to their users. Some names come up repeatedly.

Bad Bunny is one such name. The Puerto Rican singer is the most listened to artist worldwide on Spotify and Apple Music. This is the third year in a row that he has topped the year-end charts of the Swedish giant. At 28 years old, Bad Bunny has become an ambassador for "Latin trap," a musical genre that mixes reggaeton, trap and hip-hop. Several of his songs, including "Dakiti," "Yonaguni" and "La Canción," have accumulated millions, if not billions, of listens on various music streaming platforms and on YouTube.

While the singer, whose real name is Benito Antonio Martínez Ocasio, has been composing songs since he was a teenager, he reached A-level stardom with his third album, "El Último Tour Del Mundo." This album became the first record entirely in Spanish to top the Billboard charts.

Bad Bunny cemented his global superstar status this year with his latest musical project, "Un Verano Sin Ti." It appears at the top of the charts of most listened to albums in 2022 from Spotify, Deezer and Apple Music. This universal approval shows how Latin music has truly made its mark on the listening habits of music lovers around the world. "The Latin music movement has grown so much. I would never take full credit or say, ‘It’s because of me.’ No, it’s every one of us. A whole generation. Our energy and presence is always felt," Bad Bunny said in an exclusive documentary produced by Apple Music.

The Weeknd, Harry Styles and Ed Sheeran are also among the most listened to artists on streaming platforms this year. All three owe this spot on the charts to the albums they have released in the last 12 months, namely "Dawn FM," "Harry's House" and "=" respectively. Harry Styles, the British star who became known in the 2010s for being part of the group One Direction first launched his solo career with his self-titled debut album in 2017. With his latest release the 28-year-old Englishman took a funkier turn. And this new musical direction seems to appeal to music lovers as his track "As It Was" is the most listened to song on Spotify and Deezer in 2022. It is also the third most searched song on music recognition app Shazam, behind "Cold Heart (PNAU Remix)" by Elton John and Dua Lipa, and "Heat Waves" by Glass Animals.

Taylor Swift, Billie Eilish and Adele also all made it into multiple year-end charts on Spotify, Deezer and Apple Music. It's a safe bet that Taylor Swift could have been even more prominent on the various music charts if her 10th and latest album, "Midnights," had been released earlier in the year, not on October 21. However, this hasn't stopped the American singer from breaking many records: she has been at the top of the Billboard Hot 100 for the past five weeks with her song "Anti-Hero," while the pre-sale of her upcoming tour even caused a massive meltdown of the Ticketmaster platform.

The year 2022 also saw a reinforcement of TikTok's growing impact on the music industry. The Chinese platform for creating and sharing short videos has contributed to the popularity of many songs, including "STAY" by The Kid LAROI and Justin Bieber. If this track was already one of the biggest hits of last year, it remains among the most listened to songs on Spotify and Apple Music in the last 12 months. Exceptional longevity that, according to the New York Times, is due to one man: Griffin Haddrill. The 24-year-old American is the co-founder of the VRTCL agency, which specializes in making hits through remixes, mash-ups and other algorithmic tricks on TikTok.

Although the social network is not (yet) a listening platform in and of itself like YouTube or Spotify, it has a huge influence on the consumption habits of music fans. As do TV shows. Kate Bush's song "Running Up That Hill (A Deal With God)" has had a huge resurgence in popularity this year, 37 years after its release. The reason? It plays a major role in the latest season of "Stranger Things," which has prompted many fans of the Netflix fantasy series to listen to it online. As a result, "Running Up That Hill (A Deal With God)" is the 12th most "shazamed" song in the world in 2022, and its streams have increased by more than 8,700% on Spotify.