Floating away: The enduring allure of Venice

The city on stiltsat once tires and refreshes the traveller 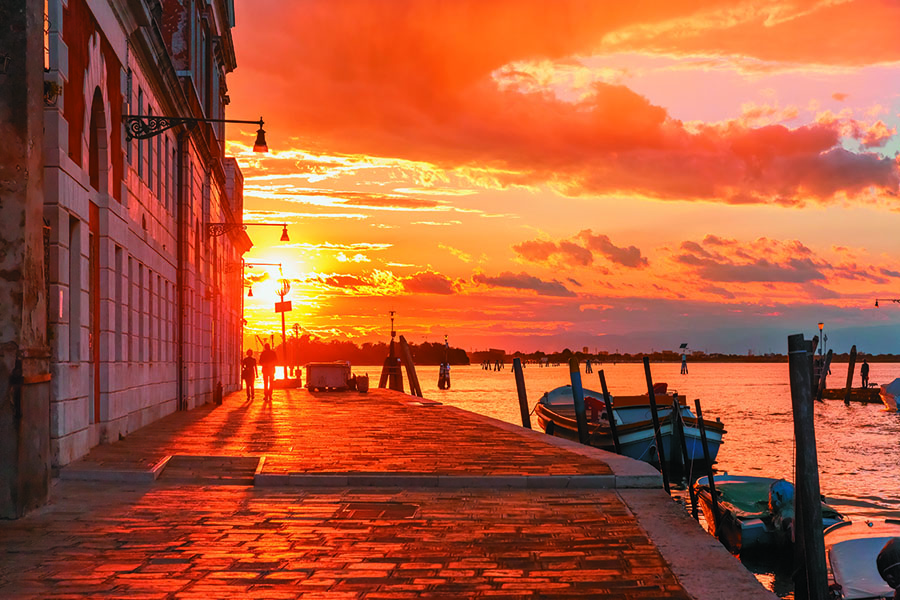 A wander through Cannaregio, a quiet part of Venice, throws up some of the best views of the Grand Canal
Image: Shutterstock.com
Of the many things in life that I have come to slowly, and somewhat reluctantly, accept, the fact that I wasn’t born Italian is the one that bothers me the most. You see, you can train yourself to be tremendously meticulous and by-the-book, like the Germans. You can teach yourself to be like the French and rattle off the differences between a Bordeaux and a Burgundy, as you carelessly dunk a torn piece of baguette into a plate of melted butter with escargot floating in it. You might even be able to gradually increase the amount of sangria you consume, until you can hold your liquor (and a conversation) without slurring, like the Spanish. But you will never, ever, come close to mimicking the Italians. No, you simply must be born Italian.

In the hands of the Italians, the humble ice cream cone transforms into a lovely, decadent gelato. The simplest scarves, when tied around an olive-toned Italian neck, transcend into the most stylish sciarpes. And, back in the 5th century, those deft Italians turned a motley collection of uninhabited islands into a city of canals, waterways, masked splendour and more. Only the Italians could build a place as beautiful as Venezia. And only the Italians can still live in a place like Venice.

Get going
My first stop on my day-long trip to Venice, then, was the Ponte di Rialto—one of the four bridges that spans the Grand Canal. With shops on either side, all the way up, along and down, the Rialto Bridge is the suave Venetian storekeeper’s delight. It is easily the quickest way to get travellers to unload any extra weight they might be carrying in their wallets. I’d been told to be careful, to scout for things at a couple of places, as the shops further away from the bridge would offer me far better prices. I’d nodded, agreeing to be prudent. 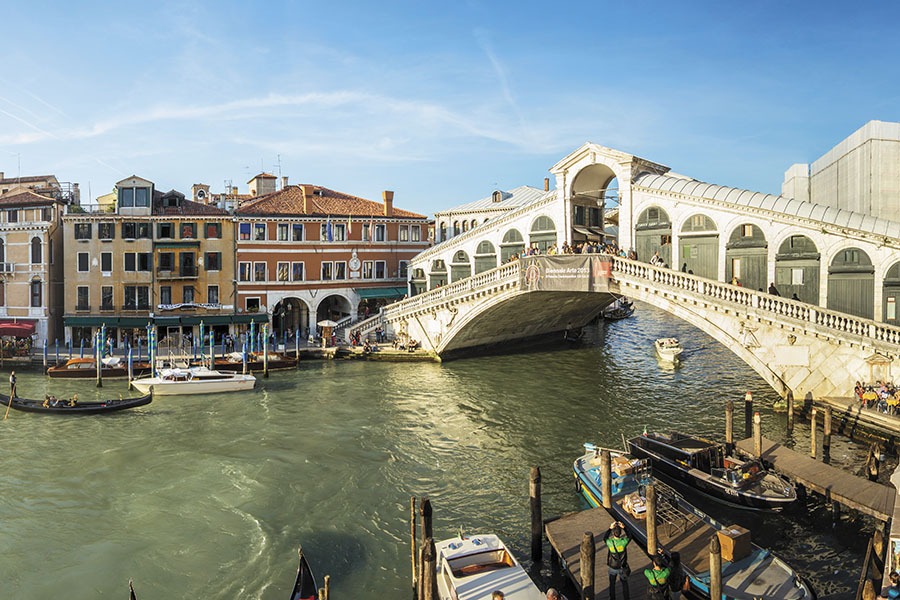 The Rialto Bridge is a shopper’s delight with a treasure trove of wares on offer. The shops further away are easier on the pocket though
Image: Atlantide Phototravel / Getty Images

And then, I found myself distracted by beautiful leather-bound notebooks in one shop, and wonderful quills at the next, scarves at the third, oh, and beautiful silver jewellery at the fourth! If you promise to be sensible with your money, I recommend spending time in all the shops along the way. It’s a good way to duck out of the crowd outdoors, but, more than that, there’s something interesting in nearly every corner.

Ride the Gondolas
Once I’d crossed over from San Polo to San Marco, via the Rialto Bridge, I realised that it was already close to two hours since I’d left the hotel. Remember, Venice is a footway- and boatway-only city, so wandering around can take a while. Especially when the little alleyways that lead you everywhere hide charming little distractions around every bend. And, so, opting for a large chocolate gelato and some fresh cherries for temporary sustenance, I headed in the direction of the gondolas. 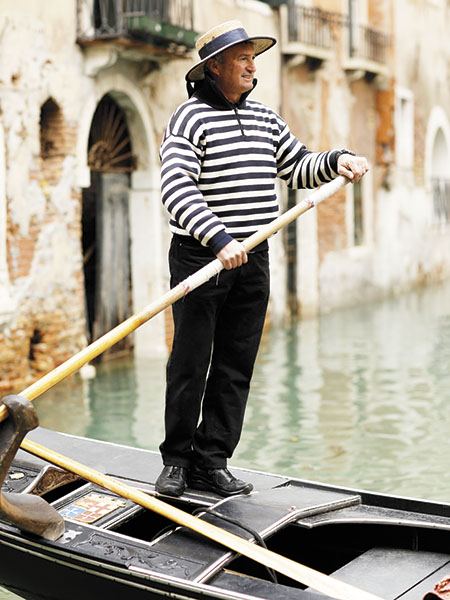 A gondola ride (left) is one of the best ways to take in the sights of Venice, including the Doge’s Palace and the Bridge of Sighs (Image: Dreamer Company / Shutterstock.com)
If there’s one thing that you simply must do when you visit Venice, it is ride down the rii and the canals in a gondola. People recommend opting for the vaporettos, which are the public water buses, as a cheap way to take in the sights. But one look at the large vaporettos, packed with people, put me off. Ride a gondola I would! 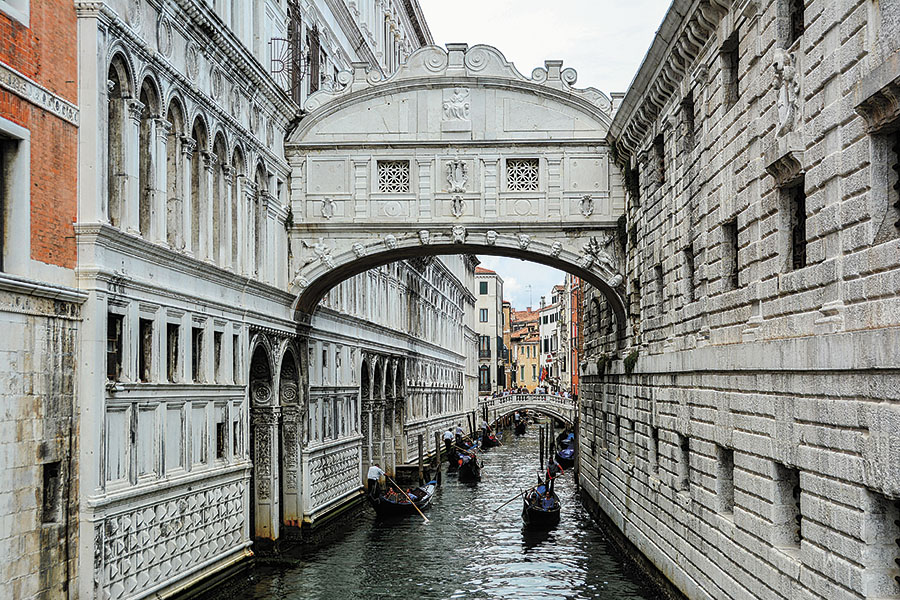 Fortunately, I discovered that Venetian gondoliers have standard rates: Eighty euros for a half-hour ride, and 120 euros for 45 minutes, which works out well if you can split it with a travel buddy. If your gondolier is as amiable as mine was, you’ll be treated to the history of buildings and hotels that you pass, and a lovely song along the way too. Which means, in 45 minutes, you’ll manage to go past Marco Polo’s house, the Peggy Guggenheim Museum, the Doge’s Palace, and, most importantly, float under the Bridge of Sighs. The gentle rocking of the gondola will relax your tired legs, and given the number of sights you’ll take in, you’ll feel accomplished too.

Tourist trail
A quick visit to the rather crowded Piazza San Marco was next. The Basilica di San Marco is as ornate a building as possible, and is worth looking at from the outside, if not visiting from the inside. If you’re on a very tight schedule, like I was, you might have to stay content with just gazing at it from afar, and at the lovely bell tower of St Mark’s Campanile, and then carrying on. I did walk around the corner and stand on the Bridge of Sighs once. This is a must-do since from the bridge you can look at the Piombi prison which is right opposite Doge’s Palace, and suppress a shudder at the thought of masked murderers.

It was already late afternoon, a fact that my stomach reminded me of by grumbling loudly. Fortunately, Venice spoils you for choice. You can venture off the beaten path and go to some of the restaurants locals frequent, or you can choose to sit by one of the streetside cafes in the more crowded parts of the city. I opted to stop at Al Chianti, on the busy Calle Larga San Marco, for some spaghetti allo scoglio, which did the trick.

Do not miss
Fortified once again, I decided to head to the only place in Venice that really was on my “must visit” list. The Libreria Acqua Alta (which literally translates into the library of high waters) is uniquely Venice—where else in the world will you find a bookstore that literally floats on the water, often getting submerged during high tides, has canoes for bookshelves, and also a stairway, made entirely out of books, that will lead you to a viewpoint from where you can gaze at the canals.

Sunset spots
I suppose it was the quest for more vantage points from which to view this lovely city that kept me going. Which is why, having once again wolfed down a gelato (you can live on this stuff in Italy) for sustenance, I decided that

I’d had enough of the regular tourist spots, and decided instead to wander through Cannaregio. 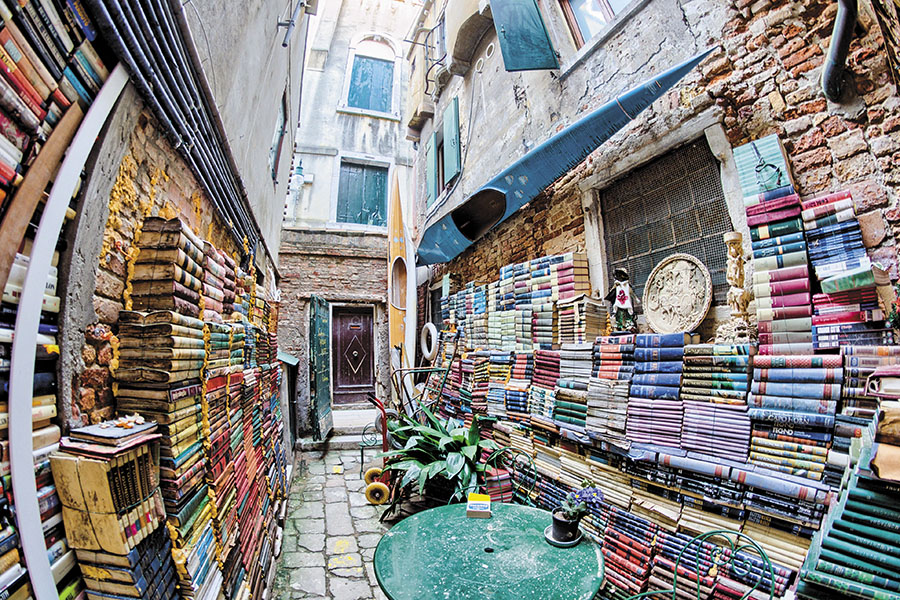 The Libreria Acqua Alta, a bookstore that literally floats on water, is uniquely Venice (Image: Shutterstock.com)

It’s a quieter part of Venice, to the north of the city, and offers some of the very best views of the Grand Canal. Having bought some essential supplies—jamón ibérico, a shrimp and calamari salad and olives—I walked down as many alleys as possible, pausing only when my feet gave up, or the view captivated me completely. And this is how I discovered an ideal spot to catch the sunset.

It was at the end of a little street called Calle del Traghetto, which opened right onto the Grand Canal. And here I spent the better portion of an hour, watching the sun go down, and eating while I looked at the water dappled in gold.

And it was here that I realised that though I might have been physically exhausted, I was also sublimely relaxed. It helps that you don’t have to hear a single car engine or horn, that you don’t have to dodge out of the way of motorists, and that the sight and sound of water is just beautifully calming and soothing.

After dark
The few hours that I had post sunset in the city, I spent without a plan in Cannaregio. It’s the best way to wander around Venice after sunset. Just pick any part of the island, preferably close to your hotel, and walk. You can stop to shop at a host of curiosity shops along the way, you can watch several street performers—I caught a highly skilled chap playing a space drum—and you can stop for pizza sold by the slice along the road, or assorted seafood sold at many shops, or even for a drink at one of Venice’s many bars.

I have just three pieces of advice for you. The first, never forget the name of the hotel you’re staying at—the alleyways can be tricky if you are inept at map reading. The second, comfortable sneakers, even if frumpy, will get the job done far better than those high-heeled pumps you’d have actually liked to wear. The third, stay out as late as possible because Venice hides many, many little surprises. See, the Italians have got many things right, but with Venice, they’ve outdone themselves. 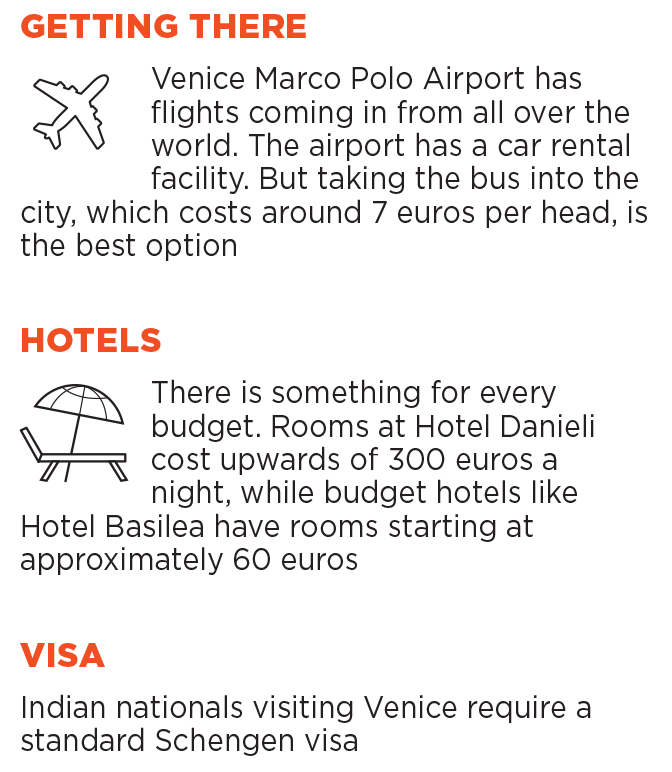