In Arctic's pioneer town, It's the survival of the pluckiest

Kangerlussuaq in the Arctic Circle is one of the last few pioneer towns in the world whose inhabitants live a dangerous, primitive and exciting life 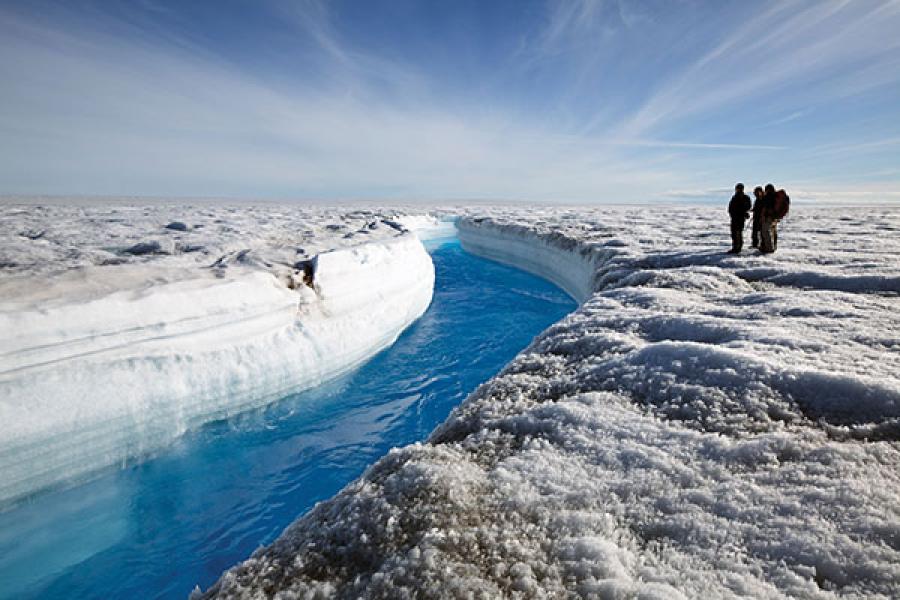 Kangerlussuaq, Greenland, is the sort of place that takes no prisoners. The day I landed in September, the town authorities called off the search for a pilot whose plane went off the grid, presumably lost in the Arctic wilderness, a few days before. The danger that’s inherent in this remote part of the world is only just becoming real to me. And yet, about 500 live here. Kangerlussuaq, which means “Big Fjord” in the local Kalaallisut language, is where I imagine someone like Jack London (the author of  White Fang and The Call of the Wild) would feel completely at home.

Sitting at the mouth of a fjord, and bound on two sides by a black, stony ridge rather literally named Black Ridge and the more fancifully named Sugar Loaf hill, it is well within the Arctic Circle. And as Greenland’s only airport capable of servicing a large jetliner, it’s the hub for Air Greenland. I’m flying in from Copenhagen, on the weekly flight, and I can see the marked difference between Kangerlussuaq and other airports right away. Everyone getting off the plane seems to know the airport staff, the ground handlers and even the security personnel. There’s a lot of hugging and welcoming back going on.

It does, of course, make perfect sense when you realise that Greenland itself has only 55,000 inhabitants, and since the only easy way on and off the island is by aircraft, everyone has to pass through the 2-sqkm Kangerlussuaq. The alternative is a roiling, cold and long sea voyage through the North Atlantic, which is why sea routes are highly unpopular with locals and tourists alike. 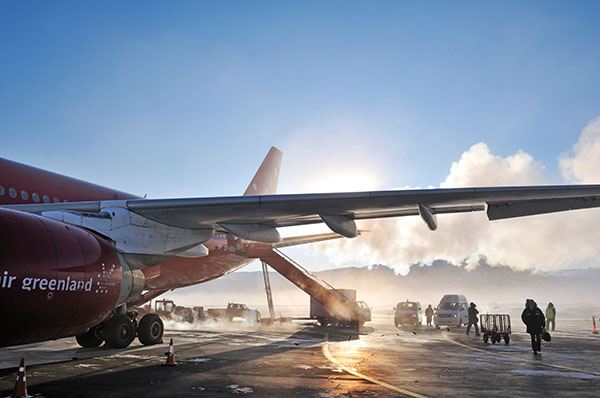 My host for the week, Philippe Trottier, who works at the Sondrestrom Upper Atmospheric Research Facility (also known as Kellyville) where he studies the Northern Lights, meets me at the airport. As we make our way to his pickup truck, he shows me the highlights of Kangerlussuaq, which is designed the way an old Wild West town might have been: A single street with buildings on either side. There’s a post office-cum-bank, a supermarket, a bar, a lone restaurant and a church that serves every religion’s needs. The most recent and biggest construction project has been the installation of a new row of streetlights on that single street.

We drive up Black Ridge to a vantage point overlooking the town. From there, you can see entire hangars, buildings and sheds—all abandoned and slowly being reclaimed by nature. It’s the birthplace of Kangerlussuaq, which served as a military base for the US Air Force during WWII. Built in 1941 to support the war effort, the base, christened Bluie West-8, was an important part of the North Atlantic air ferry route between America and Europe. At its peak in the early 1940s, about 1,400 personnel were stationed at the base. And while Bluie West-8 was abandoned in 1992, the town survived. 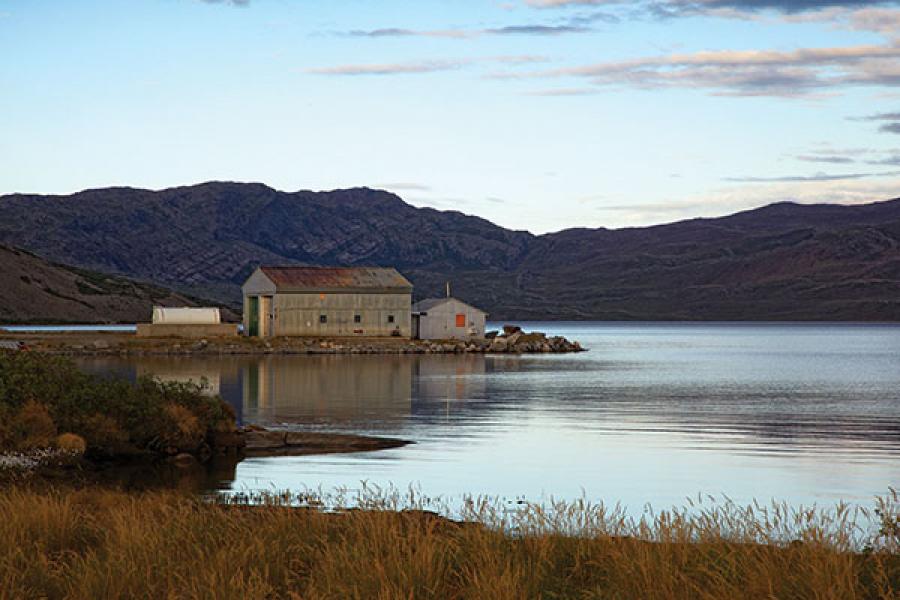 Image: Jan Vermeer
Lake Ferguson
Today, Kangerlussuaq is utterly dependent on two liquids for its existence. One is water, which has to be piped in from Ferguson Lake, 3 miles from the main town. The pipes themselves are a technological marvel: They run over-ground, rather than underground, because they need space to expand and contract with extreme temperature changes, from highs of 18 0C to lows of -35 0 C.  The entire 3-mile length of the pipe is heated. A circulation pump ensures that the water is always flowing and does not have time to stay still and freeze. A frozen pipe in winter means the entire settlement could be out of
water indefinitely.

Even in the summer months from May to September, despite easy access to water from the nearby Russell Glacier, the town’s inhabitants are dependent on Ferguson Lake for their survival. Micro-fine silt dissolved in the glacier water makes it impossible to drink. There are many tales of desperate settlers who drank the glacier water and suffered kidney stones caused by the silt, which is so fine that the body thinks it is processing nutrients and tries to pass it through the kidneys.

The other liquid, without which Kangerlussuaq would die, is diesel. Used by everything from pickup trucks to generators, diesel is life in the Arctic. Without it, the water pipes would cool, then freeze, and finally burst from over-pressure caused by ice. Without diesel, generators would fall silent and heating would no longer work. There’s a limited amount of wood to burn and when that’s gone, a cold death awaits anyone who tries to eke out a living here, especially those who are not able to live off the land, like the native Inuit. 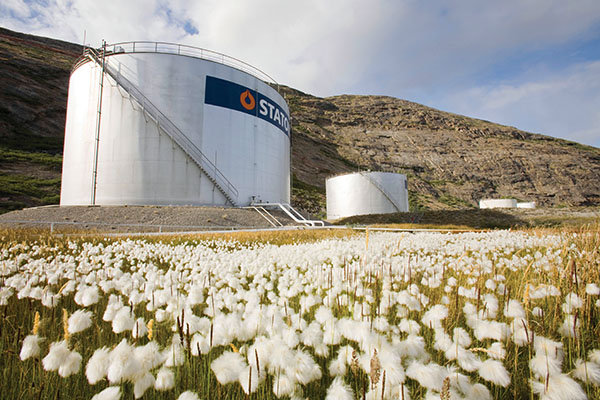 Fortunately, this is not a fate likely to befall Kangerlussuaq anytime soon: There are large diesel bunkers that are topped off every two years—which is also when the price of diesel goes up in the town—and there is an almost fetish-like obsession with keeping the generators running. Most facilities have three generators to ensure that even if one fails there are two as backup.

While there is a supermarket in Kangerlussuaq, it’s resupplied just three times a year. The supply vessels only make it to Sondrestrom port in the summer months when the fjord isn’t frozen over. This means that for more than six months of the year, there are no food supplies coming in. While a serious shortage has not occurred recently, luxury goods and non-essential supplies are incredibly expensive and rare. It’s not uncommon to see prices like 145 DKK (approximately Rs 1,500) displayed against a small bar of chocolate. Even the basics, like meat and veggies, aren’t cheap. It’s why plenty of Greenlanders, especially those living in towns like Kangerlussuaq, prefer to supplement their diets with meat that they hunt. Caribou (reindeer), musk oxen and snow hare all fall to the rifles of the townsfolk, who use hunting prowess as a measure of attraction in the opposite sex.

“After all,” as my host Philippe puts it, “when you see someone returning from a hunt with some reindeer or musk ox, you just want to go up and kiss them. It doesn’t matter how they look, only that they have food to put on the table.” 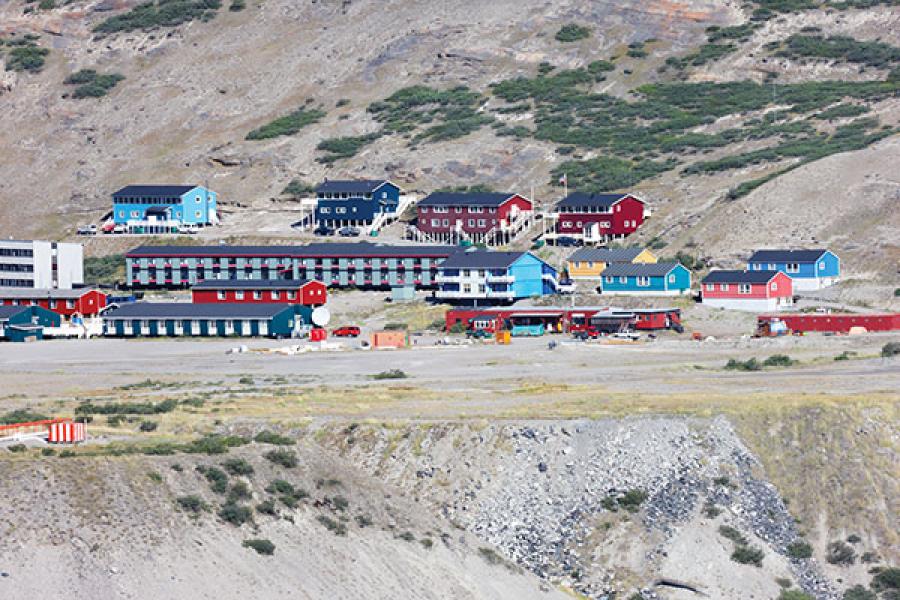 Image: Alamy
A distant view of Kangerlussuaq
Despite the cold that threatens to freeze one’s bones and Arctic winds that can reach speeds of up to 75 km/hr (enough to embed straws through a wooden telephone pole) tourists often seek more danger. The week before I arrived, a foolhardy tourist had tried to go kayaking on the glacier lagoon outside Kangerlussuaq. Solo kayaking is perhaps the most dangerous thing you can do in freezing waters, mere metres from a glacier wall. With temperatures rising due to global warming, the ice sheets that support these glaciers are melting at a never-seen-before rate. Glaciers calving, where pieces of ice break off the front of glaciers to form icebergs, take place with depressing and increasing regularity. The tourist was never heard from again.

There is a sort of gallows humour that is very prevalent in Kangerlussuaq, usually directed at the foolish things that tourists do. But it is tinged with frustration, as if the locals are joking about people dying simply because it’s the only way they can deal with the need to take the deceased by the shoulders and shake some sense into them. Probe a little further and the despair is evident. “Why would you go do something as foolish as hike in a snowstorm, or go kayaking on the lagoon?” asks Jens Pravi, a wilderness guide and native Greenlander. “As if there are not enough dangers right at home.”

In Kangerlussuaq, survival comes down to a combination of preparedness and luck. And those who choose to trust more to luck invariably end up realising that it is in short supply north of the 66th parallel. 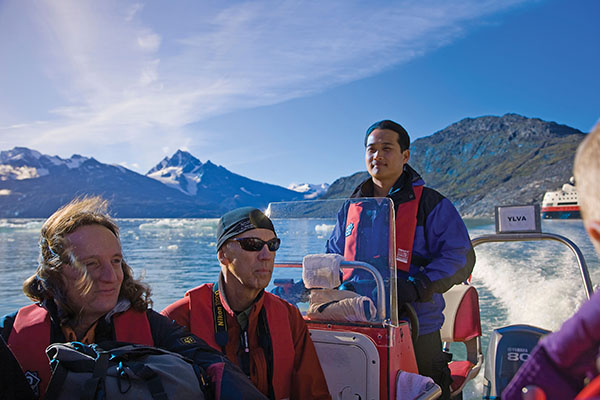 Image: Dave G. Houser / Alamy
Norwegian-made Polar Circle boats allow tourists to get close to a glacier in Evighedsfjorden, the Fjord of Eternity in Greenland

Life in this town is hard and filled with reasons to complain and yet, not too many people actually bemoan their lot. Most of the 500-odd residents work at the airport; others deal with tourists and trade. Despite the hardship and privation, these people have made a choice to live here and, on the surface, they seem to be happy in that choice. And those that aren’t, are silent about their grievances, at least with outsiders.

There is, however, a telling incongruity which shows that the residents don’t actually consider Kangerlussuaq to be their home. And it can found in the cemetery which serves the town: In a huge lot that’s been around for many, many years, there is only a single grave marker.

People may come to Kangerlussuaq, live for years and even die there, but no one wants to be buried in this frontier town for all eternity. There is always someplace else that a person prefers to return to, for a final resting place. Nobody chooses to call it home.

And that’s why Kangerlussuaq, like the other rapidly dwindling number of similar towns around the world, is a true frontier settlement. A place of transition, before pioneers and settlers move on.

Tweets by @forbesindia
Giving with a purpose
Online conversations: It's the new order, stupid