The Intent Is to Build Communities for Friends of India 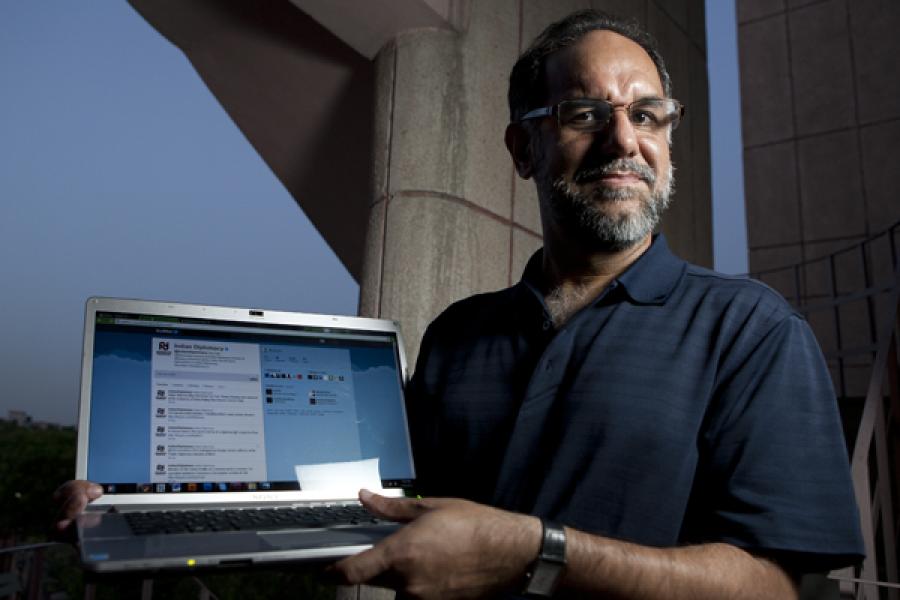 Image: Madhu Kapparath for Forbes India
Navdeep Suri, Joint Secretary, Public Diplomacy, MEA, India.
What is the Public Diplomacy division doing with social media?
We’re trying to see if we can have an integrated approach: We have a Web site and we have a YouTube channel, a Facebook page and a Twitter account and with all of these we’ve tried to reinforce each other in different ways.
The principal objectives are:
One is that we want to try to reach out to younger people in particular, because whether it’s India or elsewhere, when you’ve got an under-30 generation that is 60 percent of the demographic, and they’re the internet-literate influencers of tomorrow, you need to reach out in their space, where you can get your message across to them.

Secondly, we see social media not just as a tool for disseminating information. It is also valuable for getting feedback, listening to what people’s views are and engaging with them in a way that a certain relationship is built over a period of time.

The third objective is to see whether we can create a space for narratives about the good work India does overseas in terms of our development partnerships, our assistance programmes, skill development initiatives in various countries, in Africa and elsewhere, the kind of work that our diplomatic commissions do, very creatively, in promoting India’s national interests in economic diplomacy, in cultural diplomacy, in engaging with the Diaspora.
Government is all about procedures and protocol; social media, on the other hand, requires a certain amount of instant interactivity, of conversation. How do you reconcile the two?
We were able to reconcile them in parts — not entirely obviously — we get a lot of responses and some are substantial and need an answer and others are comments, or observations. If there’s a substantive comment or a request, we try and respond to that as quickly and as fully as possible. Sometimes there is a complaint; in which case we simply respond by saying, thanks for the inputs and we will relay this to the high commission or the passport office concerned, and we do that diligently.
With the pages for Indian missions abroad, and your other social media efforts, there are the mechanical guidelines — how do you got about it if you’ve never touched this thing before? — and there are diplomatic protocols — who is entitled to do what? Who are the people who are actually handling these accounts and what kind of training are they getting?
We feel that it is important that our diplomatic missions get tuned into the medium. That is why about two weeks back we sent instructions saying: wherever local regulations allow you, please open Facebook pages; where you can, try and go bilingual; where there are large alternatives to Facebook — like Orkut in some countries, in Russia there’s a different platform, or China there’s a different platform — use whatever you think is right, going by local knowledge.
In terms of guidelines, we’ve suggested both some dos and some don’ts. The dos are fairly obvious. Initially use it for non-political stuff. The intent here is to make it a vehicle for Indian soft power and to create a platform to build communities for friends of India.
This would be the Diaspora as well as people of other nationalities?
That’s the beauty of Facebook: It classifies people according to interest rather than ethnicity or nationality or gender or age or whatever. That’s why we hope it just builds communities of friends of India.

If you go through our Indian Diplomacy Facebook page, you’ll see a little icon on the left for ITEC (the Indian Technical and Economic Cooperation programme, in which we bring people from overseas to India at our cost and provide them training in various disciplines). You can see that there already some 250 people who’ve signed on. And you can see that they represent, from their names at least, a fairly diverse sprinkling of nationalities.
Coming back to the guidelines, there are also some fairly simple commonsense don’ts that recognise that there’s the difference between how an institution like an embassy or a ministry uses Facebook from the way you as an individual would use it. The medium does not recognise any difference between publicly expressed views, official views and private views; you need to be constantly aware of that. Try and respond as quickly as you can because credibility is key.
In times of unrest, political strife, of danger, natural disasters, what’s your social media plan?
The last couple of months, starting with the evacuation of our nationals from Libya, have been a hugely positive experience. We realised that when you put out information on a prompt, timely basis on Twitter, followed up with details on your Web site, there’s a tremendous value addition because of the multiplier effect that you get.
The second thing, particularly in a disaster situation, is how engaged those who are involved can become with you. We saw at least three cases where we had members of the Indian community in Amal, and particularly Misratah, where we started getting feedback from members of the Indian community: “What are your evacuation plans for us?”
Within the context of our own country, we also see it as a great way to improve our interface with our own people. Recognising that very often passport and visa issues are people’s biggest grouse against us, and not particularly how the work we do in analysing countries and promoting economic or cultural relations, the head of our passport and visa office has also gone on Twitter. I think it makes people feel better that they are being listened to and there is somebody responding.
How difficult was it to get buy-in from your colleagues, up and down the line?
Initially it was very tough, but the Foreign Secretary was consistently very supportive and that certainly helped. It also meant trying to understand what people’s reservations or objections were.
At the end of the day, successful implementation will be the best answer. Because our experience has been fairly successful I think there is much more buy-in now than there was, say, six or eight months back.
Being human we will make mistakes. What’s your policy for handling screw-ups?
With the recognition that mistakes are made in any walk of life, this one carries a slight additional burden: The mistake can get amplified very quickly because that’s the nature of the medium, which is why the approach that we’ve followed is deliberately conservative. We’ve been bold in adopting the medium, but we’ve been conservative with how we’re handling it, to minimise the possibility of mistakes. But if something does occur, we will take it in our stride. If we’ve tweeted something wrong, I’ll be the first to acknowledge that this is the mistake and here’s the correction.
There’s a certain inherent democracy and transparency in the medium, and I think we’re beginning to respect it for that. If you’re honest, or seen to be honest, in the way you approach it, then [laughs] you may not get punished for your mistake as severely as you would if you tried to cover up.
Where did this all start?
When I came into this job, I think it was partly recognition that most of the work we were doing was, subconsciously, aimed at “people like us.” We weren’t consciously doing much that was aimed at the younger generation and that’s the future. And so the decision was taken to get into that space, predominantly by me, and that’s how we started.
Could you go over some examples of learning?
We had this fascinating example in the Libya case, where we had this one tweet coming to us from Chennai, and we had this gentleman saying you’re only talking about Tripoli and Benghazi, what about Misratah? That persuaded me to check with my colleague, and the information that we had initially was that the port was closed in Misratah, so we couldn’t evacuate people from there yet.

With this gentleman — we were first corresponding through Twitter then we started sending direct messages to each other and thereafter on email and so this was an unusual thing of communication between us sitting here and an unknown individual we didn’t know — eventually he told us that his father is with M.N. Dastoor & Company, and is working with the Libyan Iron & Steel company in Misratah as a consultant, and his information was that there were 66 Indians working in that steel plant alone, and there were another 400 in Misratah, and even though the port of the city was closed, the steel plant had its own jetty, which could take ships up to 250,000 BWC, and so our ferry could actually come there and pick up people as an option. This real-time information we found was priceless.
How do you check the credibility of any of your sources?
On credibility, the information we were getting was far too specific and obviously we will cross-check it with our ambassador as well because eventually what is going to happen will happen through the good offices of the ambassador in Tripoli. So there is that extra mechanism available.

Tweets by @forbes_india
Didi’s Great Bong Dream Team
Nirupama Rao: We Want to Be Part of the New Media Revolution