Is Your Mobile Phone Loaded With Money?

As a women techpreneur, Carol Realini is a rare breed. Her company, Obopay, allows consumers to transfer money and pay for goods and services through mobile phones. After scripting a success story in Kenya, Realini is now trying to do the same in India 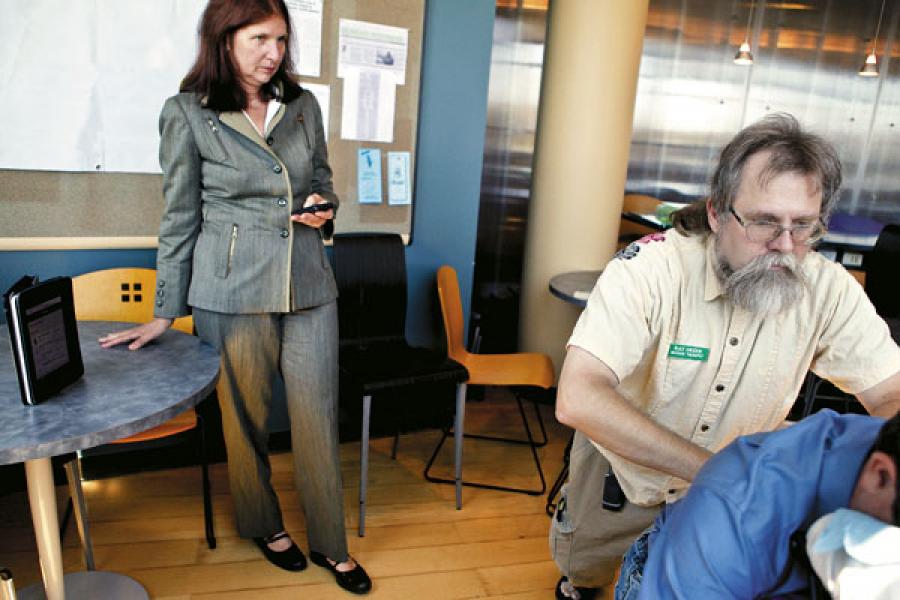 Name: Carol Realini
Profile: Founder Obopay, a Silicon Valley mobile payments company.
History: She was voted one of the top 25 women to watch for in technology in 2010 by AlwaysOn, Stanford University technology summit.
Her Mission: Deliver fi nancial services to a large number of people through mobile phones.

I was bored; so I decided to take a re-look at my life. I had retired in 2000 after spending about 25 years in technology companies — a few of which I had started. Two of the companies that I started were involved in providing technology and services to banks. I started to work with non-profits that were fostering entrepreneurship in developing countries.

While travelling there, I was taken aback by the number of mobile phones people had, even when they didn’t have basic services like electricity, water and roads. I started thinking about what might happen to banking as mobile phones reached people who are beyond traditional services.

I was in a prepaid cellphone store in Congo and it looked exactly like a bank; people were topping up and recharging their balance. And I thought why couldn’t we just take that model and allow people to load money and not just minutes on mobile phones?

Traditional banking has only reached 1.5 billion people in the world at best. It inspires a natural feeling of trust because it is a building of brick and mortar, but the cost models are very high so we felt that mobile was going to be a major breakthrough. In 2005, we founded Obopay.

We wanted to have the US in our global roadmap because it is the place from where lots of remittances are sent. The original plan was to set up in India or Mexico first. But we had critical mass in the US and because it was such a crucial part of our plan, we decided to do US first.

From the beginning, we were doing product and technology development in India, [but] it was Vani Kola, a venture capitalist from India, who accelerated our plans for going to India. In November 2007 I took my first trip to India to determine the readiness of the market. I spent two weeks on this trip and by the time I was leaving I was convinced that this would be our next market.

India represents such a big opportunity to deliver mobile banking to large numbers of people. At the time we started, there were 100 million phones in India, now there are 600 million phones. Forty-one percent Indians do not have access to bank accounts.

The footprint of traditional banking is small when compared to the number of cities in India — 600,000 towns and villages, but less than 100,000 bank branches. Clearly, traditional banking wasn’t going to meet the needs of the growing market of India.

We have started the pilot in two cities in India; we are now in the next phase. Our goal is to go from these two cities to a national roll-out within 12 months. We have a tie up with [Yes Bank]; we are working on signing up the next bank.

Our view is to get every type of mobile phone — not any one carrier or one type of handset — to offer our service. We have a partnership with Nokia, which has a footprint three times larger than all the bank branches put together.

We work in very different regulatory environments around the world. In India regulations stipulate that there should be a bank in the foreground if you want to transfer money, collect savings, or offer credit. This is not true in other parts of the world. Most banks that we deal with are very actively pursuing this because they understand that the mobile phone is a game changer for the banks.

That’s exactly what happened in Kenya. Kenya has perhaps the most advanced financial regulatory environment in the world. In Kenya we have a tie-up with Essar Telecom Kenya, which is the issuer of the financial product.

Let’s compare India’s situation to Kenya where mobile payments have grown really fast. In two years, the number of bank accounts has grown from 3 million to 10 million. Two years ago, 22 percent of households had access to banking services; that number is now 38 percent. Some people feel that acceptance of this service is so high in Kenya because of easy regulation. But I am agnostic about regulation; I don’t think it is the biggest hurdle.

The one thing that Kenya has, which India doesn’t have today, is a national ID — a government issued picture ID card. That made it easier to get people onboard, because the intense documentation to open a bank account gets taken care of automatically by the card. This is why India’s Unique Identification number project will be so important. The biggest obstacle for us — the biggest cost to get people onboard for the service we have developed — is the documentation process.

In India, we take Nokia retailers and we license them and enable them to be banking correspondents. They take the deposits; soon they will be able to load the money on mobile phones.

The other key takeaway is that you have to find the right anchor partner. We are present in USA, India and Kenya and now we are looking at Senegal in Africa. In USA we partner with MasterCard which has a relationship with every bank. In Kenya we partnered with Essar, which is the fastest growing mobile service provider. In India we have a motivated partner like Nokia which has a great footprint and good retail access.