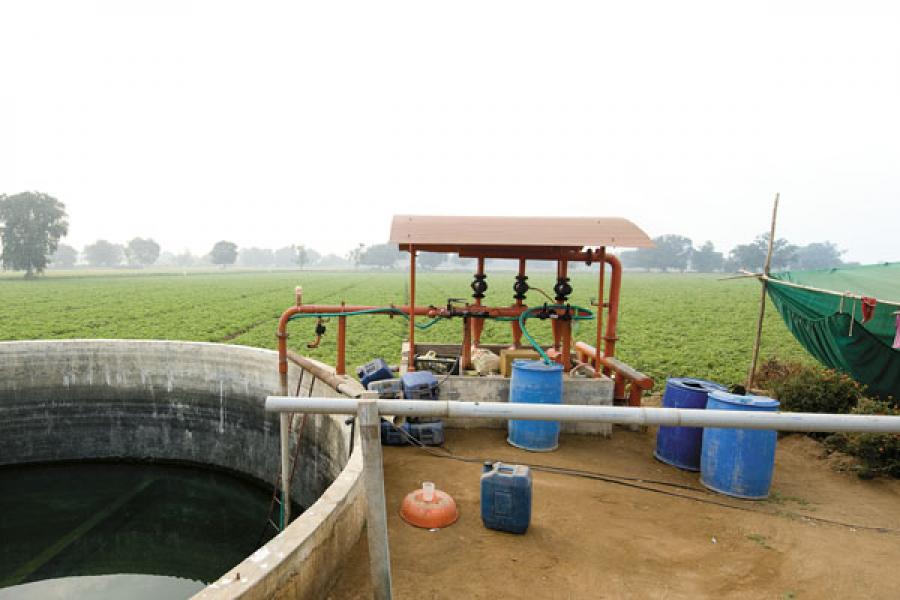 In a country of unique problems, the solutions cannot be conventional. Netafim Irrigation realised this when it pondered over the problem of how to provide drip irrigation to small Indian farms. Six months ago, the wholly owned subsidiary of Israel-based Netafim, the world’s largest micro-irrigation company, indigenised its Family Drip System (FPS) for mainstream farming in India. As a result, drip irrigation is now available for farms that are as small as a quarter acre.

FPS was originally developed for irrigating the backyard gardens in developed countries. Netafim itself had, till then, catered mostly to large farms of a few thousand acres. The budgets for these systems were large, and so was the incremental produce that farmers could get by adopting such systems. But that began to change when Netafim set up its own subsidiary in India in 1997. For the purposes of drip irrigation, India’s farm needs were different from most other countries in two significant ways.

First, even some of the largest farms in India would be considered medium-sized or even small in most developed countries. Most drip irrigation systems that were available in India were for a land-holding of one acre. The small size of the farms immediately translated into a design constraint. Small farmers could not afford the expensive drip irrigation systems.
Second, electricity was not always available to many farms. To irrigate a farm using drip irrigation systems normally requires continuous power supply for three to four hours. Most Indian villages did not have this luxury.

For these reasons, catering to small farmers remained a low priority item for Netafim till an opportunity suddenly presented itself in Jharkhand. This East Indian state is one of the most impoverished states in India where most farm holdings are not just under one acre but also on uneven terrain. The farms are often owned by tribals who live on subsistence farming by growing just one crop when the rains are good. The rest of the year they work as menial labour — often on their own lands which they ‘loan’ out to better-off businessmen.

Netafim took advantage of a state government plan to make agriculture viable for its impoverished tribals. The initiative was partly funded by the state under the Swarnjayanti Gram Swarozgar Yojana (SGSY) scheme. This scheme is meant for the self-employment of rural poor and the upliftment of tribals. The strategy involves introducing appropriate technologies and skills for irrigating a plot of land large enough for each tribal family to earn enough, but small enough for the husband-wife team to cultivate the plot themselves without depending on outside labour. The size of this plot has been standardised to 25 decimals, or 1,000 square metres — a little less than a quarter of an acre.

The conventional FPS is a pressure compensated system which ensures that the flow of water is equal all over the farm right from the beginning of the pipes to the very end of the pipes, both on low lying portions of the field and on higher levels. This is achieved through valves which clamp down when the water pressure increases (usually close to the source of water supply) and eases up when this pressure decreases (usually at the end of the pipe). A conventional FPS has tap inlet through which the water supply is taken into the system.
This is where Netafim used a little bit of Indian jugaad (improvisation), as water supply is not very regular on Indian farms.

To create water pressure, Netafim decided to befriend gravity. It recommended the setting up of a water tank at a height.  This water tank could be filled with water with just 10 minutes of electrical motor power. If there was no electricity, the water could even be put in the tank through a hand pump. Once the tank was full, it could irrigate the field for over three hours.
Thus, when fields were parched last May, the only fields that remained green with a promise of a very rich harvest were those that had this system installed.

As against other systems that would cost at least double, this system cost just Rs. 30,000 of which 50 percent came in by way of a grant from the state government.  The farmer had to finance just around Rs. 15,000.

“We brought down the price of the FPS for the Jharkhand farmers to almost half the level it could have otherwise cost.  How we did this is something we cannot elaborate on,” says a smiling Lalit Mishra, strategic business unit head, in charge of business development at Netafim Irrigation. 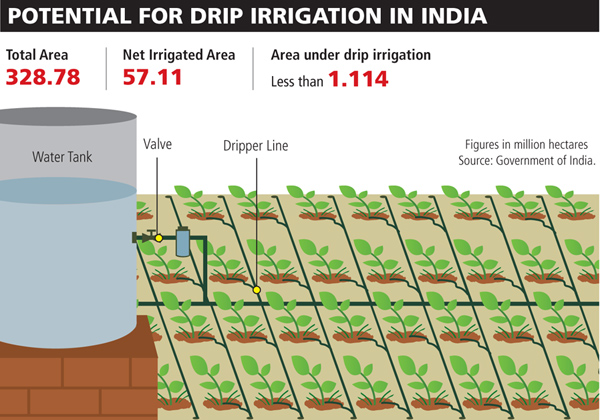 Infographic: Hemal Sheth
With a bit of help from both local support groups and the state government, the first group of 30 tribals who installed this system went to market with their produce just two months ago, each earning anywhere between Rs. 25,000 to Rs. 40,000 from the first crop. The tribals who grow vegetables with a crop cycle of three months, now earn a steady cash flow, helping them earn more than enough to repay the loans taken for the irrigation system within one or (a maximum of) two crops.

Says Govardhan Munda, a 25-year-old tribal farmer, who now goes about teaching other farmers how to earn cash through this method of farming, “Today, we can earn at least Rs. 25,000 every cropping season. Some of us have even made Rs. 40,000.”

Now that the state of Jharkhand has decided to scale up this experiment to cover 100,000 farms, Netafim’s agronomists are helping the state’s officials to mark out each field with GPS locators, so that the spot can be identified on a GPS grid, and then help the state government couple it with the Unique Identification card (UID) project of the government. “This,” says a state government official, “will reduce the practice of drip irrigation companies claiming that more acres have been covered by drip irrigation than is actually the case, thus becoming eligible for a higher subsidy grant.” The process is likely to be adopted by other states as well.