White New Yorkers represent about 45% of people at heightened risk of monkeypox infection and received 46% of vaccine doses. Black New Yorkers, who make up 31% of the at-risk population, received only 12% of doses administered so far 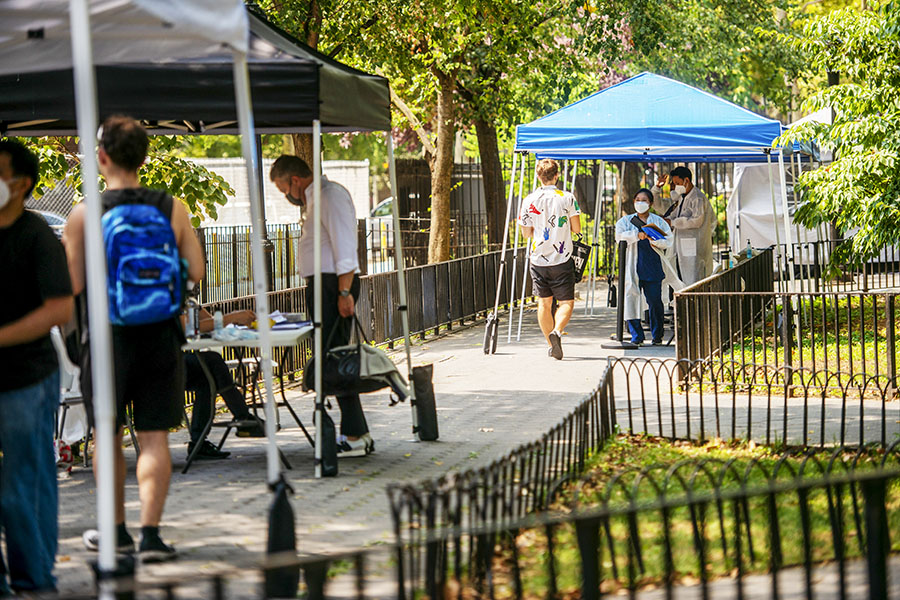 White New Yorkers represent about 45% of people at heightened risk of monkeypox infection and received 46% of vaccine doses. Black New Yorkers, who make up 31% of the at-risk population, received only 12% of doses administered so far, according to data from the city’s Health Department.

Hispanic residents were overrepresented among vaccine recipients. They made up 16% of the at-risk population but received 23% of shots. Hispanic men so far represent the largest share of monkeypox patients.

Racial and ethnic imbalances in vaccine distribution are also happening elsewhere, as a highly limited supply of monkeypox vaccine has often gone first to those with better access to the health care system and more time to figure out when doses will be released. There are also concerns among advocates that a new method of administering the vaccines favored by the federal government, which uses only a fraction of the current dose, may inadvertently deepen disparities.

New York City has vaccinated more people for monkeypox so far than any other jurisdiction. Some 64,000 of the roughly 130,000 people whom it deems most at risk have gotten the first of two doses. New York City estimates that there are about 134,000 people — primarily men who have sex with men — who are at heightened risk of infection, based on a 2020 city health survey.

The racial disparities have left public health experts and activists frustrated that lessons from the COVID-19 response remain unlearned. Black and Hispanic New Yorkers were far more likely than white New Yorkers to be infected with COVID and to be hospitalized and die during the deadly first wave in the spring of 2020. They were also less likely to receive vaccinations early on and less likely to receive early treatments, such as monoclonal antibodies.

Public health experts and activists were particularly dismayed that appointments for the monkeypox vaccine had been doled out largely on a first-come, first-served basis, just as they were in an early phase of the COVID vaccine drive. Public health experts say that has meant that vaccine recipients have tended to be whiter and wealthier than other eligible New Yorkers because they are more likely to have flexible schedules, enabling them to spend the hours it can take to find a vaccine appointment.

“We went back to vaccine cattle calls — everyone come — even though we know that if we do broad-based, top-down, no-nuance messaging, it is not going to reach everyone who needs it,” said Matthew Rose, a Black HIV and social justice activist. “This was a foreseeable problem. We ran the same play we have run every other time before.”

In New York City, the first batch of vaccines were given with little advance notice, midday on a Thursday, at a sexual health clinic in Chelsea, Manhattan, to a mostly white crowd. Later vaccine offerings relied on a glitchy internet appointment system.

A clinic was set up in Harlem, but those who came appeared to be mostly white and lived elsewhere. Neighborhood residents were not able to walk in and get shots, a decision that came under deep criticism from community members who felt excluded. Some Black men have said the city did not do enough to warn them about the disease or how to protect themselves.

“Black men in particular are underrepresented in our vaccination effort compared to their risk,” said Dr. Ashwin Vasan, the city health commissioner, in an interview Thursday.

“I do think that we have work to do to advance equity,” Vasan added. “And there are sometimes trade-offs in terms of speed and our ability to go deep, build relationships, work with trusted partners, and get the folks who need it most access to immunization.”

There are signs that the spread of monkeypox is slowing in New York City. After increasing steeply for two months, monkeypox cases plateaued at between 60 and 70 new cases per day by late July. More recently, they have declined to an average of 54 cases per day, according to city data.

City health officials remain concerned that many cases are not being reported, particularly those in communities of color with less access to health care. The city said Thursday that it planned to award $5 million in grants to community organizations in low-income neighborhoods to help promote vaccination efforts.

While few jurisdictions have released racial data about recipients, the ones that have revealed worrying trends.

In North Carolina, for example, 70% of monkeypox cases have been in Black men and 19% in white men, but 24% of vaccines have gone to Black recipients, and 67% to white recipients, according to an Aug. 10 report from the North Carolina Department of Health. (Because the virus has been predominantly spreading through networks of men who have sex with men, the focus of vaccination campaigns nationally has been on that demographic.)

Similar trends are appearing nationally in who has access to the antiviral medication Tpoxx, which is effective at treating monkeypox: Black people accounted for just 17% of the 233 patients who received the treatment as of July 22, though they made up 26% of the total number of patients at that point, according to the Centers for Disease Control and Prevention.

Tpoxx is not particularly scarce — the federal government has a stockpile of more than 1.7 million courses — but there are barriers to accessing it, including cumbersome paperwork.

Doses of Jynneos, the vaccine, have been scarce since the beginning of the outbreak, partly because of federal missteps. To stretch the supply further, the federal government recently approved a new way of administering the vaccine, which allows providers to use only one-fifth of the current dosage. The vaccine may now be administered intradermally, or between layers of skin, rather than in the fat layer under the skin.

The strategy allows federal officials to assert that they have solved the supply problem and now have enough vaccine to cover all 1.6 million people that they believe are most at risk.

But some advocates in the gay community are concerned that the new dosing strategy may just compound the equity problem, rather than solve it.

Intradermal vaccines can be safe and effective. But just one study has examined the safety and efficacy of administering the Jynneos vaccine intradermally. The manufacturer did not note significant safety concerns or a decrease in efficacy, but there was a greater chance of side effects at the site of the injection, such as redness, swelling and firmness.

Switching over to fractional doses also requires training. Most providers do not have extensive experience giving shots just under the skin. If given too deeply, the fractional dose will not be as effective. The need for training may also limit how many small community clinics that reach marginalized groups are able to offer it.

Vasan, the city health commissioner, said that while New York and other localities are feeling pressure from the federal government to switch over quickly to the new method, the city planned to implement the change gradually. The pressure intensified Thursday, as the White House announced that the next phase of vaccine distribution of 1.8 million doses — calculated by multiplying 360,000 full doses by five — will only be distributed to jurisdictions adopting the new approach.

Joseph Osmundson, a virus expert at New York University, said he was concerned that the federal government’s approach would push jurisdictions to move to the new method rapidly even if they have concerns. Health advocates said it might also be hard to sell Black men in particular on the new approach, which could feed into skepticism that they are being treated as less-than.

As the city saw during the COVID vaccine campaign, many Black New Yorkers mistrust the government and medical establishment’s assurances because of a long history of racism in medicine, as well as past medical experimentation on Black people.

“So now that a critical mass of white gay men in the biggest U.S. cities have been able to get a whole dose, they just got to do — whatever — to us,” said Kenyon Farrow, the managing director of advocacy at PrEP4All, an HIV advocacy group, describing the sentiment he has heard from fellow Black gay men on social media.

“If that becomes in any way a sizable amount of people feeling that way,” he said, “then you actually undermine the whole point of having to shift to this strategy to begin with.”