All dogs are good, and it has nothing to do with breeds

After conducting owner surveys for 18,385 dogs and sequencing the genomes of 2,155 dogs, a group of researchers reported that for predicting some dog behaviors, breed is essentially useless 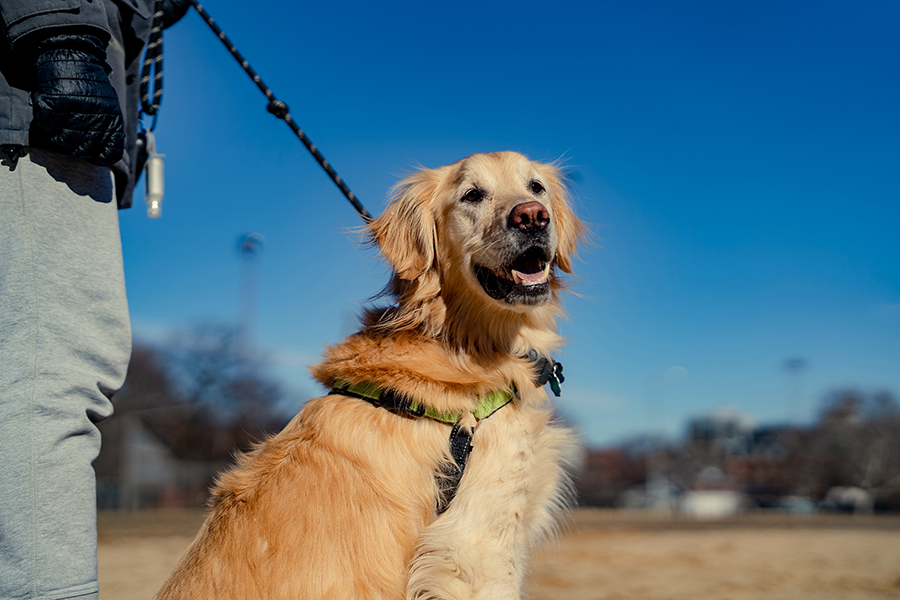 Ollie with his owner in McCarren Park in New York, Jan. 21, 2022. Retrievers that don’t retrieve and Papillons that point are all possible because the genes that shape dog behavior predate modern breeding that focuses on appearance, according to a new study. (Amir Hamja/The New York Times)

Don’t judge a book by its cover. Don’t judge a dog by its breed. After conducting owner surveys for 18,385 dogs and sequencing the genomes of 2,155 dogs, a group of researchers reported a variety of findings in the journal Science on Thursday, including that for predicting some dog behaviors, breed is essentially useless, and for most, not very good. For instance, one of the clearest findings in the massive, multifaceted study is that breed has no discernible effect on a dog’s reactions to something it finds new or strange.

This behavior is related to what the nonscientist might call aggression and would seem to cast doubt on breed stereotypes of aggressive dogs, like pit bulls. One thing pit bulls did score high on was human sociability, no surprise to anyone who has seen internet videos of lap-loving pit bulls. Labrador retriever ancestry, on the other hand, didn’t seem to have any significant correlation with human sociability.

This is not to say that there are no differences among breeds, or that breed can’t predict some things. If you adopt a border collie, said Elinor Karlsson of the Broad Institute and the University of Massachusetts Chan Medical School, an expert in dog genomics and an author of the report, the probability that it will be easier to train and interested in toys “is going to be higher than if you adopt a Great Pyrenees.”

But for any given dog, you just don’t know — on average, breed accounts for only about 9% of the variations in any given dog’s behavior. And no behaviors were restricted to any one breed, even howling, although the study found that behavior was more strongly associated with breeds like Siberian huskies than with other dogs.

And yet, in what might seem paradoxical at first, the researchers also found that behavior patterns are strongly inherited. The behaviors they studied had a 25% heritability, a complex measure that indicates the influence of genes, but depends on the group of animals studied. But with enough dogs, heritability is a good measure of what’s inherited. In comparing whole genomes, they found several genes that clearly influence behavior, including one for how friendly dogs are. 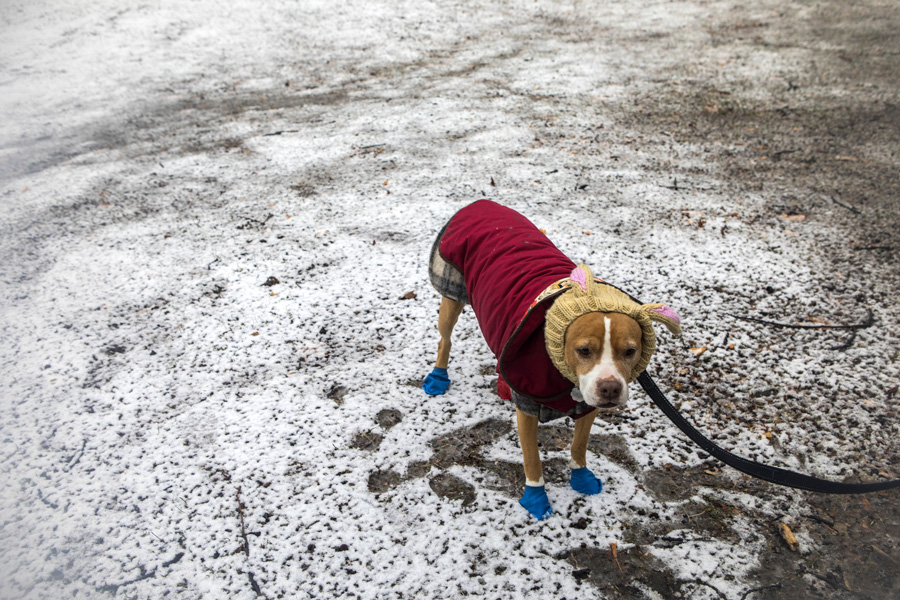 Casey, a pit bull mix, with her owner in Central Park in New York, Jan. 17, 2018. Retrievers that don’t retrieve and Papillons that point are all possible because the genes that shape dog behavior predate modern breeding that focuses on appearance, according to a new study. (Hiroko Masuike/The New York Times)

What the study means is that dog behaviors are strongly inherited, but that the genes that shape whether your dog is friendly, aggressive or aloof date from long before the 19th century when most modern breeds, like those recognized by the American Kennel Club, were created. Breeding since then has been primarily for physical characteristics.

But buyer, or dog adopter beware. “I’ve known Labradors who’ve howled and Papillons who pointed and greyhounds who retrieved as well as retrievers who didn’t,” Lord said. 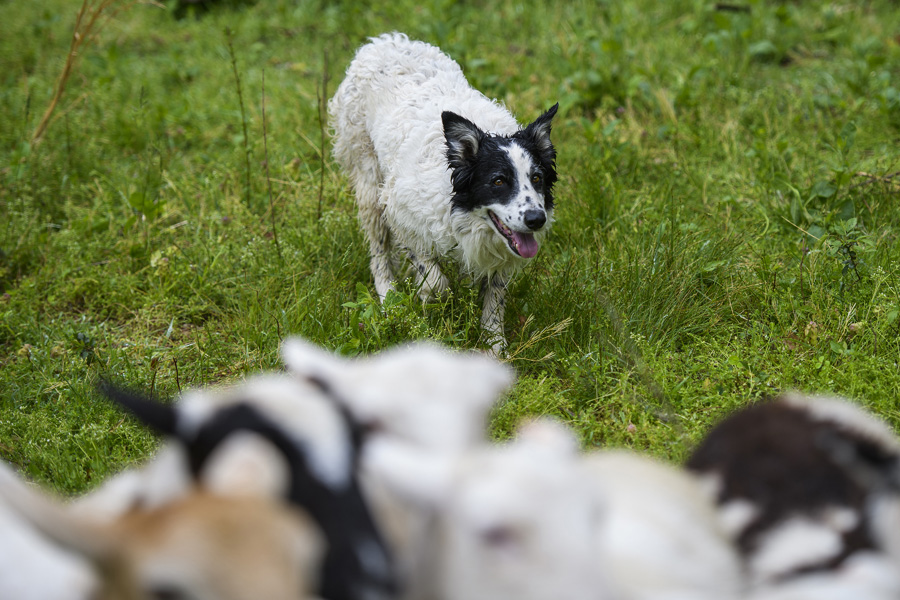 Duggie with ewe lambs in Nashville, Tenn., April 14, 2019. Retrievers that don’t retrieve and Papillons that point are all possible because the genes that shape dog behavior predate modern breeding that focuses on appearance, according to a new study. (William DeShazer/The New York Times)

The findings probably won’t surprise people who work closely with dogs, like Dr. Cynthia Otto, director of the Penn Vet Working Dog Center at the University of Pennsylvania. Otto, who was not involved in the report, said that the study “totally makes sense to me. I think there are some big picture behavioral traits more common in some breeds than others, but the individual variation is so high within a breed.”

For example, she said, breeders have favored border collies that are easier to train, which may explain why training them is easier. But she added that, “certainly within the border collies — there is still great individual variation.”

The research for the new study began about eight years ago, Karlsson said, and the original goal was to compare genomes of mutts with breed dogs in what is called a genomewide association study, to look for DNA areas or genes associated with certain behaviors. 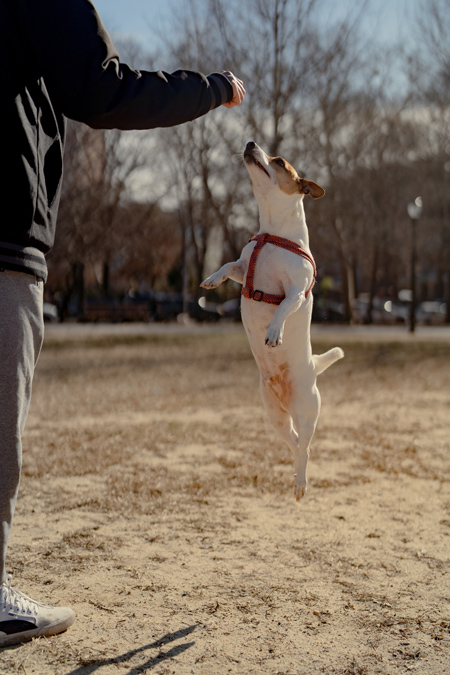 Sherlock with his owner at McCarren Park in New York, Jan. 21, 2022. Retrievers that don’t retrieve and Papillons that point are all possible because the genes that shape dog behavior predate modern breeding that focuses on appearance, according to a new study. (Amir Hamja/The New York Times)

Kathleen Morrill, also an author of the paper with the Broad Institute and the Chan Medical School, said that the study’s high number of mixed-breed dogs, or what the authors and you may call mutts, was a major strength.

“Mutts were actually the perfect kind of dog for sussing out the connections between breed and behavior,” she said, because their DNA is so shuffled that it’s easier to separate looks from behavior.

Evan Maclean, director of the Arizona Canine Cognition Center at the University of Arizona who was not involved in the study, said, “This is one of the first papers to really do impressive dog genomics work using mixed-breed dogs.” These dogs have such variety that it makes genetic comparisons more powerful, he said, but they have been excluded from a lot of earlier studies. “And this paper just shows how valuable those populations can be,” he added.

The researchers found 11 specific DNA regions associated with behavior. This finding could assist in the study of human genomics, although the researchers are just scratching the surface of the relationship between both species’ genomes. A region that affected the likelihood of a dog howling, for example, is associated in humans with language development. And a region connected to enjoying being around humans is also present in human DNA, where it is associated with long-term memory.

Unlike most scientific research, any dog owner can help out on this project.

The researchers got their wealth of information from Darwin’s Ark, a project that Karlsson and her colleagues created by asking owners of any breed or mutt to submit DNA swabs of their dogs and answer questionnaires. They are still looking for more dogs.

“Anybody from anywhere in the world can sign up,” Karlsson said.