As England breached record high temperatures, flights in and out of Britain's international airport were halted due to 'surface defect'; temporary speed restrictions were imposed on portions of Britain's rail network—including London's tube system over fears that the rails will buckle to extreme heat and overhead wire systems will fail 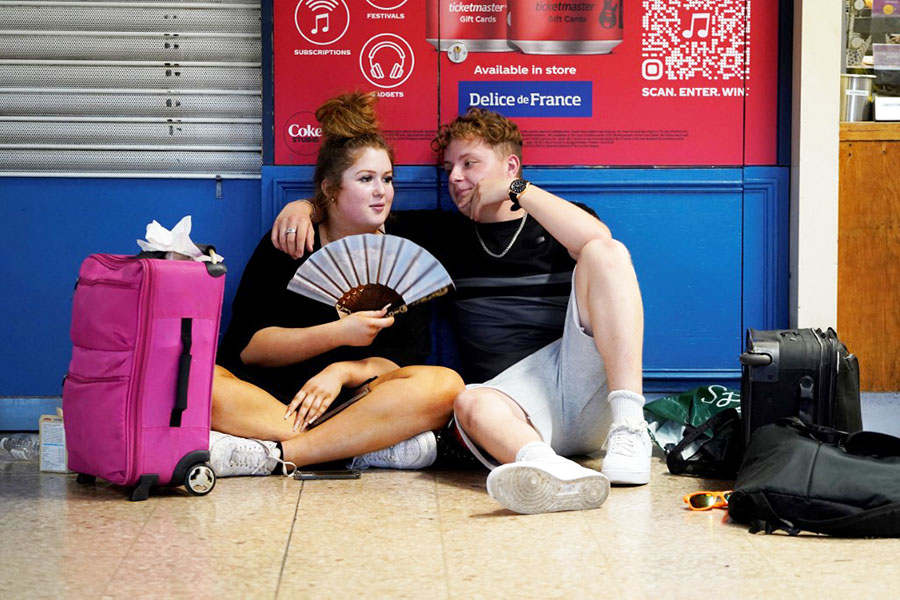 A rail passenger uses a fan to cool down as they sit with their belongings at Euston train station in central London, on July 19, 2022, as services were cancelled due to a trackside fire, and as the country experiences an extreme heat wave. Image: Niklas Halle'n / AFP

LONDON — England on Tuesday was facing the possibility of serious disruption to its transportation networks as temperatures were poised to creep to unprecedented new highs.

Flights into and out of one of Britain’s busiest international airports were halted for much of Monday after a “surface defect” caused by high temperatures was identified on the runway. Footage from London’s Luton Airport showed engineers repairing a roughly 15-foot-by-10-foot section of the tarmac. The airport reopened Monday evening after work was completed.

Temporary speed restrictions were in place over large portions of Britain’s rail network, including on London’s tube system. Entire lines preemptively canceled service — including all services heading north out of London — over fears that the extreme temperatures forecast could cause rails to buckle. And bold red warnings were posted in stations and on social media urging people to reconsider their trips.

But despite guidance against traveling Tuesday, many Londoners felt they had no choice but to use the city’s tube network and other trains.

Among them was Rosabel Johnston, 60, who had altered her route to ensure she was able to get on board one of the few air-conditioned portions of London’s Tube network Tuesday morning to get to her job.

“Last night, my journey home was a nightmare,” she said, detailing canceled trains and the stifling heat onboard the carriage she did manage to get on. “The heat is oppressive here in London, there is just no relief.”

Johnston, who is originally from Seychelles, an island nation in the Indian Ocean, said she was used to high temperatures but that London was simply not equipped to deal with the rising thermometer.

“We only think about the cold weather here, but with climate change, that is all changing,” she said. “That’s really worrying.”

In London, where some of the most extreme temperatures are expected, a number of tube lines had service suspended Monday and Tuesday, according to a statement from Transport for London, which operates the network.

Just 40% of the Tube network has air conditioning, and Transport for London advised passengers to carry water and considering timing trips for cooler parts of the day.

Samira Schmidli, 44, who was waiting for a train in north London on Tuesday with her daughter, said they were coping with the high temperatures, but said the heat wave had driven home the real risks of a warming planet.

“I find it remarkable how little people seem to care about climate change,” she said. “We are on the edge of tilting into an abyss.”

National rail services were also bracing for disruptions to thousands of miles of steel tracks, which absorb heat easily and can buckle, causing serious delays. Steel rails expand when heated and can push against adjacent pieces of track, which can also damage equipment that detects where trains are to keep them a safe distance apart, according to Network Rail, which owns and repairs the railway infrastructure in England, Scotland and Wales.

In a statement, the company warned of delays, cancellations, and last-minute changes to train services, and upgraded guidance from a day earlier that had advised passengers only to take essential trips to new advice not to travel at all. No rail services were planned to run into or out of London King’s Cross all day Tuesday when the highest temperatures were expected.

“We have not taken the decision lightly to upgrade our travel advice to ‘do not travel’ if heading north out of London tomorrow,” Jake Kelly, Network Rail’s operations director, said in a statement, warning that any journey Tuesday in the areas affected by the highest temperatures would be “long, disrupted and uncomfortable.”

Tweets by @forbesindia
Elon Musk and Twitter will go to trial over their $44 billion deal in October
Photo of the day: Heatwave hurts