The heat wave is a vivid example of the challenge India faces in ensuring its food security as the effects of climate change worsen, compounding its difficulties in raising agricultural productivity to international standards to feed a growing population of nearly 1.4 billion 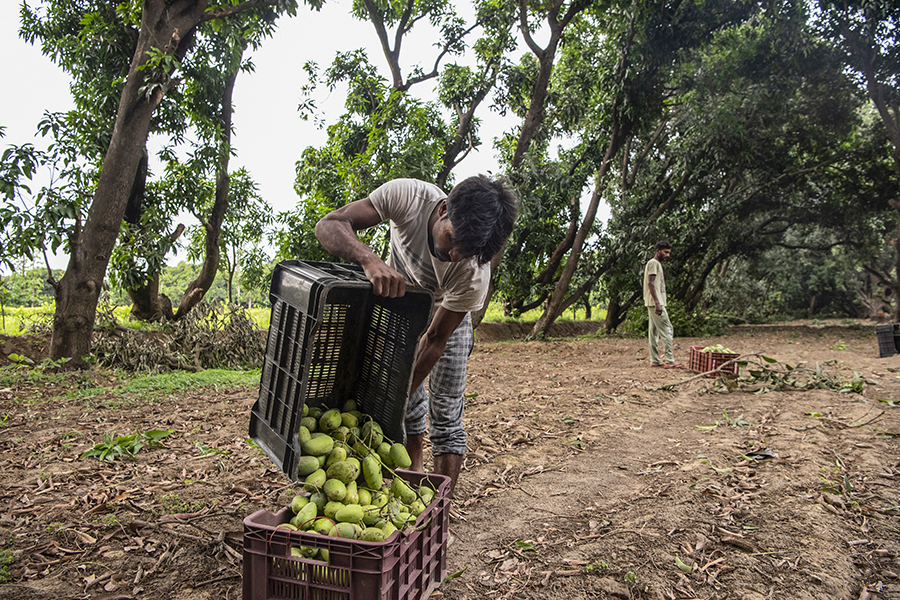 Unripe mangoes that fell during a recent storm are gathered in Malihabad, India, May 23, 2022. Blistering spring temperatures have devastated crops of the country’s most beloved fruit. (Saumya Khandelwal/The New York Times)

MALIHABAD, India — No fruit in India is as universally loved and as eagerly anticipated as the mango, which, for one brief window each year, cools and sweetens the long days of summer.

Mangoes are added to kebabs, used to sour dishes and pureed with mint to make refreshing drinks. Connoisseurs argue fervently about which of India’s dozens of varieties — each with a distinct flavor, color and texture — are best and disagree politely about the correct way to eat the fruit: by cutting it into slices or by sucking the juice straight from the top.

But this year, this centuries-old ritual is imperiled. As blistering heat has struck northern India weeks earlier than usual, mango crops have been devastated, threatening a way of life for the thousands of small farmers who grow the fruit and the millions more who consume it.

The heat wave is a vivid example of the challenge India faces in ensuring its food security as the effects of climate change worsen, compounding its difficulties in raising agricultural productivity to international standards to feed a growing population of nearly 1.4 billion.

The dangers of a hotter future are achingly visible on a small farm in Malihabad, a prime northern mango-growing district, where Mohammed Aslam tends about 500 trees.

A few months ago, his mango trees were the picture of health, their deep green leaves glistening above the well-hydrated soil and their branches bearing perfect clusters of white flowers. Then India experienced its hottest March in 122 years of record-keeping, with temperatures averaging nearly 92 degrees Fahrenheit and soaring as high as 104. The mango flowers withered and died before bearing fruit.

Virtually none of Aslam’s trees, spread over 4 acres, produced mangoes. In a normal year, they would have yielded more than 25,000 pounds of fruit.

“I have never witnessed this phenomenon before in my lifetime,” he said as he looked over his farm in the state of Uttar Pradesh one recent afternoon, lamenting the thousands of dollars he stood to lose on the failed harvest.

Aslam is one of hundreds of farmers who have watched helplessly as the intense heat of March continued into the hottest April in 50 years and then carried on into May. Climate scientists, in a report issued Monday, said the chances of such a heat wave in India had increased by at least 30 times since the 19th century.

The heat has far exceeded the optimal temperature for fertilization of mango trees, which is around 77 degrees Fahrenheit, said Dheeraj Kumar Tiwari, a scientist at an agricultural university in Uttar Pradesh.

India is the world’s largest mango producer, accounting for nearly 50% of the global crop. Much of it is consumed domestically, but the country exports tens of millions of dollars’ worth of mangoes each year to the United Arab Emirates, Britain, Germany and the United States. Over the past decade, India has been trying to penetrate markets in other European Union countries as well.

In the past, export growth has been limited by the higher costs of Indian mangoes compared with those from countries like Brazil, Peru, Israel and Pakistan. India has been striving to increase productivity, which would lower costs.

Even before the extreme heat, India’s mango exports had been badly damaged by the supply chain disruptions of the pandemic, with shipments abroad shrinking by almost 50% last year. India’s top export organization had hoped for a big turnaround this year as the Indian and U.S. governments eased trade rules.

Instead, severe weather has hurt yields not just in northern India but also in the south, which has been hit by heavy, untimely rain.

In the state of Andhra Pradesh, in the south, the heavy rains delayed the mango plants’ flowering by a month. By the time the fruits emerged, it was too hot, and many dropped from the branches prematurely.

B. Sreenivasulu, deputy director in the horticulture department of the Chittoor district in Andhra Pradesh, said that during the heavy rainfall that lashed the area in November and December, when flowering occurs, farms were inundated, and many riverside trees were uprooted.

Cultivation of mangoes in the district, the most productive in the state, has been reduced by at least 30% this season. “This time, the climate change effect was so visible,” Sreenivasulu said. “Like never before.”

The harsher conditions threaten mango-growing cultures with roots stretching back hundreds of years.

The Malihabad district in Uttar Pradesh is known for delectable varieties like the Dasheri, which is named after a village in the area. The district is home to numerous families who have been growing the fruit for at least three generations. Most farmers in Malihabad own small plots of land and depend solely on mangoes for their livelihood.

One recent afternoon, against the backdrop of the serene beauty of the mango orchards lining both sides of a smooth highway in Malihabad, farmers who had gathered at a roadside stand expressed anxiety about the future. They discussed diversifying into other fruits and vegetables or selling off their lands.

Nadeem Ahmad, a third-generation mango farmer, took a long breath as he walked onto his small farm next to the highway. He pointed toward trees that would normally be laden with fruit this time of year.

“With a heavy heart, I will have to start chopping these trees down if this pattern continues,” he said. “The soul of a farmer shudders at seeing these fruitless trees.”

Across from Ahmad’s farm, Aslam said he was living in “acute tension” over a mango crop yield that was merely 5% of previous years’. His 14-year-old son said he did not want to carry on the family business when he grew up.

“There will not be enough fruit even for my children,” Aslam said, his square forehead creasing under the strong afternoon sun. He noted that the hardships had forced him to postpone his daughter’s wedding.

“No mango, no life,” he added, his words tapering off in a small voice.