Mon Dieu! No mustard. France stews without its beloved condiment

Deprived of the condiment that gives an edge to a steak frites, life to a grilled sausage, depth to a vinaigrette and richness to mayonnaise, France has been casting around with quiet desperation for alternatives 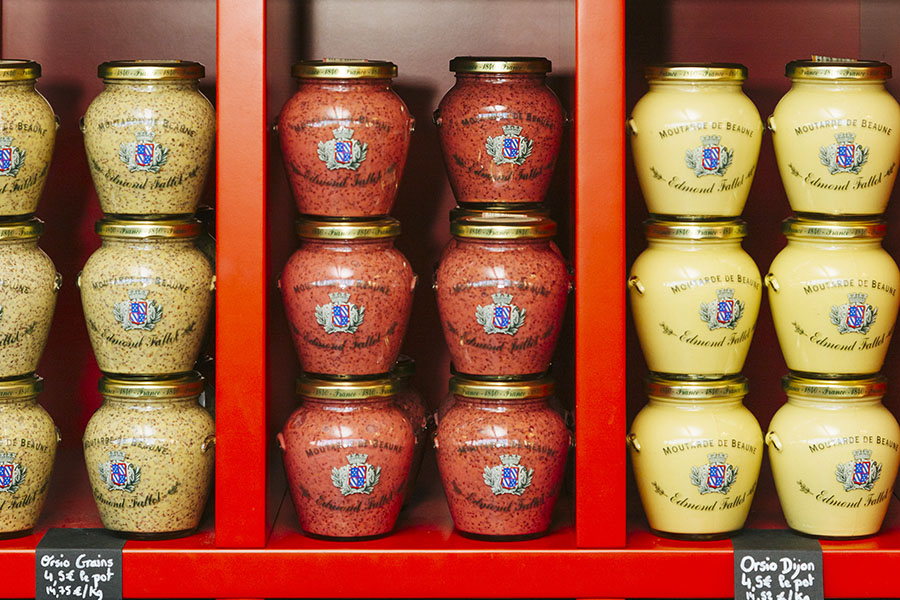 Shelves at a mustard factory’s shop in Beaune, France on Sept. 21, 2015. A perfect storm of climate change, a European war and Covid have left the French scrambling for alternatives to Dijon mustard, in short supply in the summer of 2022. (Alex Cretey Systermans/The New-York Times)

PARIS — Mustard runs deep in French culture. “My blood is boiling” is rendered in French by the expression “La moutarde me monte au nez” (“The mustard is rising into my nose”) — and as Bastille Day testifies, when that happens in France, the effect can be devastating.

As France marked its most important national holiday Thursday, commemorating the storming of the Bastille fortress prison in 1789 that ignited the French Revolution, the mysterious disappearance of mustard from supermarket shelves has caused, if not revolt, at least deep disquiet.

Deprived of the condiment that gives edge to a steak frites, life to a grilled sausage, depth to a vinaigrette and richness to mayonnaise, France has been casting around with quiet desperation for alternatives. Horseradish, wasabi, Worcestershire sauce and even creams of Roquefort or shallots have all emerged as contenders.

Poor contenders, it must be said. The problem is that Dijon mustard is as irreplaceable as it is indispensable. Butter or cream of unique quality may be more essential to French cuisine, but many an unctuous sauce withers into insipidity without mustard. In Lyon, the idea of an offal sausage, or andouillette, without its mustard sauce is as inconceivable as cheese starved of wine.

Another problem, it transpires, is that Dijon mustard is composed largely from ingredients that do not come from that lovely capital of the Burgundy region. A perfect storm of climate change, a European war, COVID-19 supply problems and rising costs have left French producers short of the brown seeds that make their mustard, mustard.

Most of those brown seeds — at least 80% of them, according to Luc Vandermaesen, director of the large Reine de Dijon mustard manufacturer and president of the Burgundy Mustard Association — come from Canada. A heat wave over Alberta and Saskatchewan provinces, which scientists said would have been “virtually impossible” without global warming, slashed seed production by 50% last year, at the same time as rising temperatures hit the smaller Burgundy harvest hard.

“The main issue is climate change, and the result is this shortage,” Vandermaesen said in an interview. “We can’t respond to the orders we get, and retail prices are up as much as 25%, reflecting the soaring cost of seeds.”

His company now receives at least 50 calls a day from people seeking mustard. There were no such calls before mustard vanished. People even come to the company headquarters in Dijon (not a retail operation) in a frantic quest for mustard. Carrefour, a leading French and international hypermarket chain, has been forced to deny rumors rampant on Twitter that it is stockpiling mustard to drive up prices. Chefs such as Pierre Grandgirard in Brittany have resorted to appealing online for any spare mustard anyone may have.

In most stores, mustard shelves have already emptied. Where there is any mustard, some signs say that sales are “limited to one pot per person.” Intermarché, a retailer, apologizing for the inconvenience caused, explains in another sign affixed to a shelf that “a drought in Canada” and Ukraine’s “conflict with Russia” have created the mustard “penury,” as the French call it.

For the French, who pride themselves on their mustard, the notion that it is seldom an entirely local product and more often depends on the kind of multinational supply chain disrupted by the pandemic has also come as a shock.

The war in Ukraine has further complicated things. Russia and Ukraine are large producers of mustard seeds but, generally, not the brown seeds, or Brassica Juncea, used in classic Dijon mustard. The mainly yellow seeds produced in the two warring countries are popular in countries, including Germany and Hungary, that favor a milder condiment.

Because the yellow mustard seeds have been a casualty of war, pushing countries that depend on them to seek other kinds of mustard, the “pressure on the mustard market generally has risen, pushing up prices,” Vandermaesen said.

France consumes about 2.2 pounds of mustard a year per habitant, making it the world’s largest consumer. Although there are indications of shortages looming in other countries, including Germany, the French mustard crisis is unique in its dimensions, partly because France depends so heavily on Canada for its seeds.

In crisis, of course, lies opportunity. Paul-Olivier Claudepierre, co-owner of Martin-Pouret, a purveyor of mustards and vinegars that are entirely French, told the daily Le Monde that the moment had come to “relocalize production.”

“We cultivate, thousands of kilometers away, a seed that we are going to harvest, bring to a port, transport across the ocean in containers, in order to transform it at home,” he said. “That costs a lot, and what a great carbon toll!”

Vandermaesen said Burgundy had embarked on a concerted effort to raise production, even if it could not match “the very large production areas in Alberta and Saskatchewan.” One problem Burgundy producers face is that the European Union has banned an insecticide long used to combat the black flea beetle, a scourge.

For now, it seems, France must learn to live without mustard, a painful adjustment. Marie Antoinette, the Queen of France at the time of the revolution, is famously said to have commented, “Let them eat cake,” when told of peasants starving without bread. (Whether she really did, before being guillotined in 1793, is another matter.)

“Let them eat wasabi” is a phrase French President Emmanuel Macron would probably be well advised to avoid.