On remote farms and in city gardens, a native American movement grows

In tribal farms, community gardens and home gardening, the Indigenous food sovereignty movement which aims to make Native communities self-sufficient through the cultivation of healthy foods 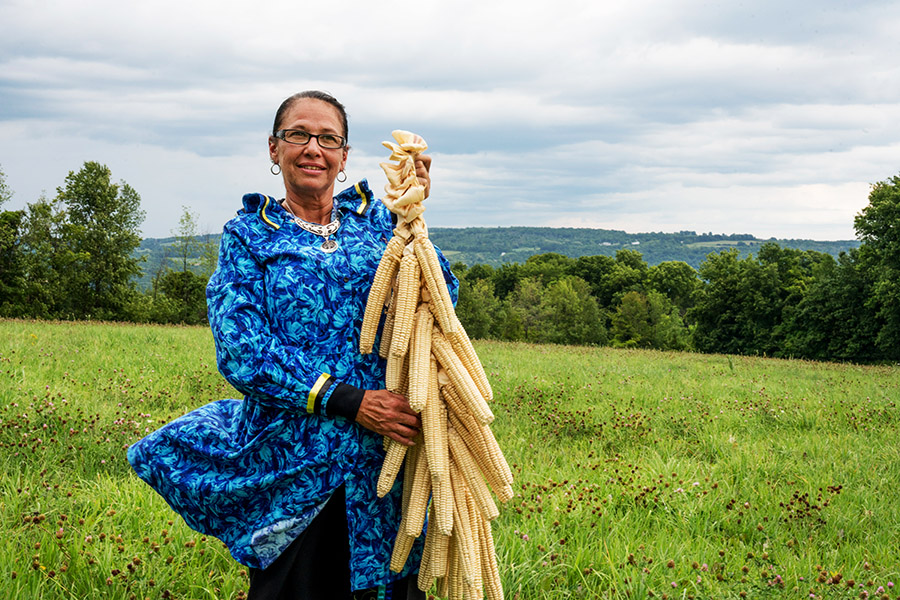 Angela Ferguson, supervisor of the Onondaga Nation Farm and a leader in the Indigenous food sovereignty movement, in South Onondaga, N.Y, on Aug 21, 2022. Through classes, seed banks and plantings, tribes across the United States are reclaiming their agricultural roots, growing healthy foods and aiming for self-sufficiency. Image: Tahila Mintz/The New York Times

SOUTH ONONDAGA, N.Y. — The solstice sun lingered overhead as Angela Ferguson surveyed the green hills of the Onondaga Nation in central New York.
“The ancestors know that we’re here and I think that’s what makes us all feel good,” she said. “They’re thanking us for utilizing this land for the purpose it was intended, which was to feed the people.”
Ferguson, 52, is the supervisor of the Onondaga Nation Farm, a 163-acre plot of tribally reclaimed land 20 miles south of Syracuse, New York. She is a leader in the Indigenous food sovereignty movement, which aims to make Native communities self-sufficient through the cultivation of healthy foods.
In tribal farms, community gardens and home gardening, the movement celebrates the agrarian traditions of planting, harvesting and eating as vibrant assertions of Native identity and community.
This coupling of foodways and identity begins with a fundamental relationship to land. “You have to have a connection with the place where you are growing,” Ferguson said. “You have to have your feet in the dirt to pick up that ancestral energy.”

That spark thrives at the Onondaga Nation Farm, a hub of community activity. Ferguson and her crew grow corn, beans and squash, known as the “three sisters” of Indigenous agriculture. They keep bees, chickens and buffaloes, and forage wild nuts, berries and onions. They sponsor a free weekly farmers market on the Nation, and offer programs to teach traditional ways of cultivation and cooking. They preserve meat and vegetables, enough to feed every tribal citizen for four years.
But the signature feature of this agricultural haven is its immense seed bank. Behind secured doors, Ferguson has amassed more than 4,000 varieties of corn, a crop central to many Indigenous diets. The seeds — kernels of corn — are exchanged through an active intertribal network of Native farmers known as Braiding the Sacred.
The room, which she jokingly calls a “field of dreams,” is tranquil, cool, sanctuarylike. In glass jars neatly stacked on wooden shelves, the seed archive is a who’s who of Indigenous agricultural endurance: varieties like Osage Red, Tecumseh’s Flint, Cherokee Rainbow Glass Gem and Haudenosaunee Strawberry Popcorn.
Some seeds have been found and returned to their tribal homes after being lost for generations. Some are thousands of years old, or the sole remnants of defunct tribes. In the seed bank, those cultures live on.
“This room is very powerful,” Ferguson said. “It is the epitome of food sovereignty.”
Self-reliance is a guiding tenet for children at the independent Akwesasne Freedom School, on the Akwesasne reservation in northern New York state at the Quebec border. In an intensive immersion curriculum designed to reverse the effects of assimilation, community members teach lessons in traditional planting, harvesting and cooking, using only the tongue of their ancestors.
Also read: Healthy in the wrong way: When food marketers don't listen
“We need to be able to feed ourselves and not depend on the outside to do that for us,” said Alvera Sargent, the executive director of the Friends of the Akwesasne School. “If we can grow our own food, we have sovereignty.”
But most Native Americans live in cities, away from tribal lands, as a result of termination policies, federal relocation programs or voluntary migration. So community groups in places like Salt Lake City, Minneapolis and Chicago have created spaces for gathering and planting traditional foods.
Native Health, a Phoenix nonprofit that offers holistic health care, maintains a traditional garden in the city center in collaboration with Keep Phoenix Beautiful. Using traditional, drought-resistant planting techniques suitable for arid climates — like Zuni waffle beds and Pima flood irrigation — the gardeners have efficiently managed a water supply for corn, wolfberries, gourds and sunflowers, along with Diné blue corn, Apache giant squash and Tohono O’odham melons.
As those names suggest, the gardens are a place where people of various tribes can connect with the land.
“Phoenix is a melting pot of different tribes, and we all have that commonality of food,” said Amanda Whitesinger, the Indigenous wellness manager at Native Health, who is Diné, or Navajo. “Having the garden helps us reclaim ourselves as Indigenous people and say, ‘This is tribal land, and we’re growing foods that kept our ancestors healthy.’ ” 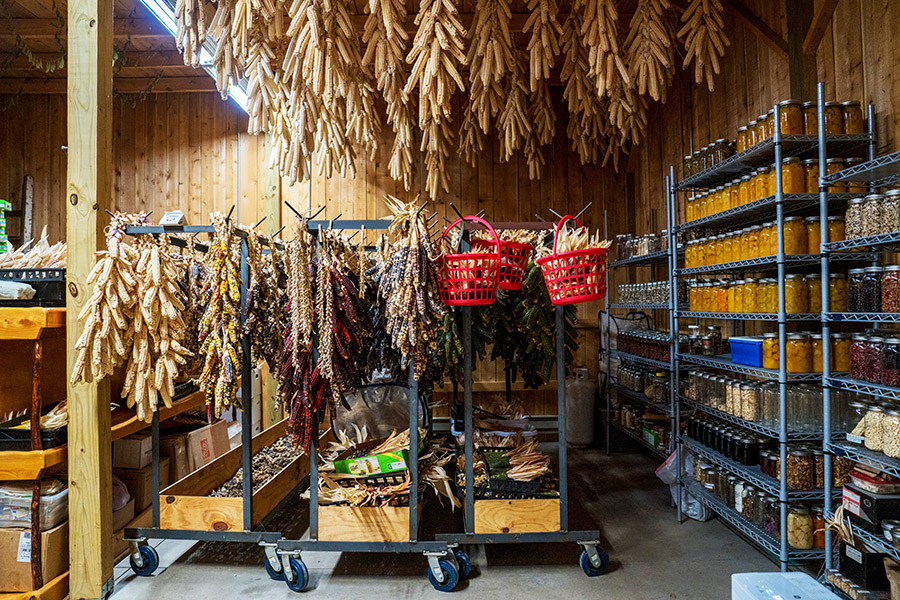 A storage room at the Onondaga Nation Farm, holding thousands of seed varieties and preserved foods, enough to feed every tribal citizen for four years, in South Onondaga, N.Y, on Aug 21, 2022. Through classes, seed banks and plantings, tribes across the United States are reclaiming their agricultural roots, growing healthy foods and aiming for self-sufficiency. Image: Tahila Mintz/The New York Times
Urban community gardens also help restore links to land and community that were disrupted by government policies and programs. Perhaps the most devastating of those practices were federal boarding schools, which removed hundreds of thousands of Indigenous children from their families for forced assimilation.
“The generation that our elders are now are products of those boarding schools,” said Jacob Butler, 43, a citizen of the Salt River Pima-Maricopa Indian Community who chairs Native Seeds/Search, a food-sovereignty nonprofit in the Southwest. “This big gap exists where that knowledge wasn’t passed down and shared.”
Last year, Ethan Tyo, 27, a Mohawk citizen from Akwesasne and a graduate student in food studies at Syracuse University, started a “three sisters” garden on campus to bring Native students together and to thank the campus community that supported him as a Syracuse undergraduate.
“I feel like I have something to give back,” he said.
This spring, he partnered with Ferguson of the Onondaga farm to plant another three-sisters garden at the State University of New York in Binghamton. BrieAnna Langlie, a paleoethnobotanist there, described the interactive garden system of corns, beans and squash as “biological symbiosis.” Like cooperating siblings, the corn acts as a trellis for the beans, and the squash is planted around the stalks to retain soil moisture and guard against pests and weeds.
Also read: Massimo Bottura: Chef with a cause
Many Native nations share a belief in the Seventh Generation principle, which honors not only ancestors, but several generations to come. This is the intersection of Indigenous gardening and cultural preservation: planting for the future.
“To hold this seed in my hand today, somebody had to grow that for generations upon generations for it to be in my hand, and I’m just a link in that chain that exists way back in time,” Butler said. “It’s my responsibility to get it to the next generation and continue that practice and continue that tradition.”