Starbucks to shift strategy to automation and expansion

Still, the coffee giant, which has been facing a wave of unionization efforts inside stores across the United States, was light on specifics around some of the concerns that have been raised by its employees, like scheduling 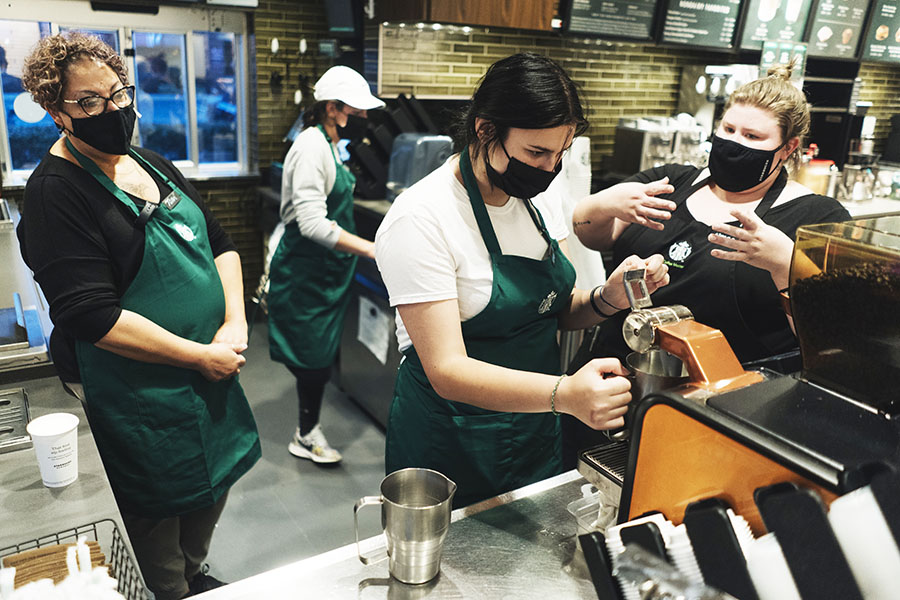 Starbucks baristas in training at a location in Cheektowaga, N.Y., Oct. 13, 2021. The coffee giant intends to increase automation at its stores and open thousands of additional locations in China over the next three years. (Libby March/The New York Times)

Starbucks provided a window into its much-anticipated “reinvention” strategy Tuesday, highlighting automations it plans to begin using over the next three years that will get food and drink orders to customers faster while cutting down on the work done by employees. It also pointed to high-growth markets like China, where it intends to open thousands of additional stores.

Still, the coffee giant, which has been facing a wave of unionization efforts inside stores across the United States, was light on specifics around some of the concerns that have been raised by its employees, like scheduling.

While Starbucks is largely viewed as a “winner” of the pandemic, having successfully moved customers away from in-store experiences to drive-through and mobile orders, Howard Schultz, the company’s interim CEO, said the company had also made strategic mistakes. Schultz, who replaced Kevin Johnson as CEO five months ago, said that, in certain ways, the company had “lost its way.”

In a meeting that ran much of the day, Schultz and other members of the Starbucks leadership team — many of whom have been installed since he took over this spring, including the newly named CEO, Laxman Narasimhan, who will take over in April — gave a look into how they planned to push revenues and profits even higher in the next three years.

In recent months, Starbucks has seen a massive surge in revenues from younger customers ordering elaborate, cold, customized coffees, like venti caramel crunch frappuccinos. These cold drinks now make up 70% of Starbucks’ revenues. So-called modifiers of these drinks — think, a shot of espresso or three pumps of pumpkin sauce — now account for more than $1 billion in sales each year on their own.

But the complexity of the drinks, along with order surges at certain times of the day, have made barista jobs more demanding and can sometimes result in delays. To help address that, the company unveiled a new cold beverage system that reduces the number of steps needed to make the drinks, as well as the need for employees to repeatedly bend down and dig into buckets for ice. In a demonstration of the system, two Starbucks employees showed that it took 35 seconds to make a mocha frappuccino with whipped cream as opposed to 87 seconds now.

“We will never replace our baristas,” said Deb Hall Lefevre, who joined Starbucks in May as its chief technology officer. “Rather, our job is to automate the work and simplify it so that their job is easier.”

The company said that it began paying all retail employees a starting minimum wage of $15 an hour Aug. 1. It introduced a new savings plan, which it said would include company contributions. But there were few details provided on other initiatives, such as a student loan management system and a new scheduling system.

The company noted that employee turnover was better than for the rest of the industry, but was still too high and that there was a focus on reducing it.

“We haven’t lived up to our end of the bargain with our partners,” Frank Britt, the chief strategy and transformation officer at Starbucks, said, referring to employees.

It was nearly three hours into the meeting before any executives brought up the issue of unionization. More than 200 stores of the 9,000 that Starbucks operates have unionized.

“On the subject of unionization, there are two paths,” said John Culver, group president of North America and chief operating officer, who is leaving the company at the end of September. “We can work together as partners, side by side, or we can have a third party between us. If we are working side by side, we can efficiently deliver solutions that support our partners in their jobs, support their physical, financial and mental well-being.”

Tweets by @forbesindia
Twitter 'chose to mislead' on security flaws: Whistleblower
Reports suggest tokenised illiquid assets to be worth $16.1T by 2030