Some 250 Starbucks stores have launched unionization campaigns in the United States, with employees voting for a union in 47 stores, said the group, Starbucks Workers United 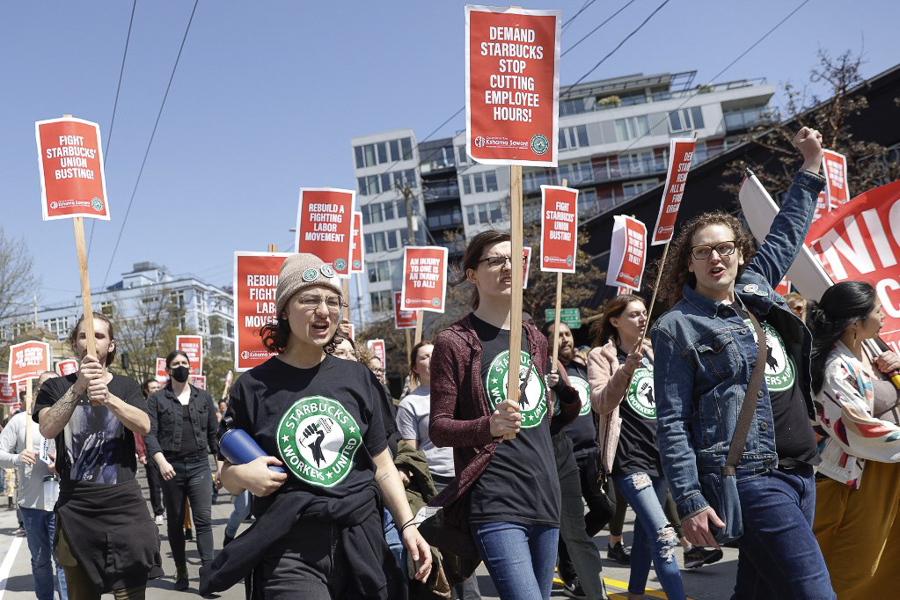 New York, United States: Interim Starbucks CEO Howard Schultz unveiled fresh investments in US stores and employees Tuesday as the company seeks to head off a unionization campaign, while it reported strong North American sales that offset weakness in China.
Schultz, the longtime architect of Starbucks tapped as interim CEO in March, said the company plans $200 million in additional investments in "our core US business" in 2022.
"We do not have adequate capacity," said Schultz, outlining new investments on store equipment and technology needed to address rising and shifting demand as more consumers order via mobile channels.
Schultz also announced another wage hike in light of staff turnover that accelerated during the pandemic.
"We've always been ahead of the curve, but we have to recognize that we haven't done enough," said Schultz. "And I think we have to recognize that there is a lot of pressure on our people."

The announcement came as Starbucks reported a 2.3 percent rise in profits to $674.5 million in the quarter ending April 3 following a 14.5 percent jump in revenues to $7.6 billion.
The coffee giant scored a 12 percent jump in comparable sales in North America, while suffering a 23 percent slide in China amid that country's latest Covid-19 outbreak.
In light of uncertainty over China and the inflation outlook, Starbucks did not offer a forecast for the rest of the year.
Still, shares rocketed higher during the conference call, as Schultz emphasized the solidity of demand, noting the company had enacted multiple price hikes over the last year with only a "negligible" impact on sales.

The new employee investments come as Starbucks faces a unionization campaign at US stores that has accelerated since a pair of upstate New York stores voted to unionize in December.
Some 250 Starbucks stores have launched unionization campaigns in the United States, with employees voting for a union in 47 stores, said the group, Starbucks Workers United.
The movement has been propelled by mostly younger staff frustrated over pandemic working conditions and seeking more say.
Schultz, who has long resisted unionization at Starbucks, tried to reset the debate even as he sketched out the reasons for his opposition to the union.
"We are highly empathic to the root causes of the frustration and anxieties that Gen Z Americans are facing, having come of age during turbulent moments in our history," Schultz said.
But Schultz defended the company, noting it has historically paid better than peers and offered better benefits, such as education aid.
Schultz said Starbucks was committed to doing "even more," such as allowing customers to tip baristas directly through the app.
"Ensuring success through wages and benefits with our partners is among our core values and has been for 50 years," Schultz said. "And our values are not and never have been the result of demands or interference from any outside entity."
While previously announced pay hikes will still go into effect at unionized Starbucks, the company is barred under federal law from additional benefits at any stores that have voted to unionize, Schultz said.
"Partners at (unionized) stores will receive the wages increases that we announced in October 2021 but federal law prohibits us from promising new wages and benefits at stores involved in union organizing and by law we cannot implement unilateral changes at stores that have a union," said Schultz, who is participating in the search for a new CEO who is expected to be announced later in 2022.
Shares of Starbucks jumped 5.1 percent to $78.10 in after-hours trading.
By John BIERS
© Agence France-Presse