Kiev and Moscow accuse each other of shelling near the facility. Rockets have struck a radioactive waste storage area and monitors warn of a "grave" crisis with potential for catastrophic fallout 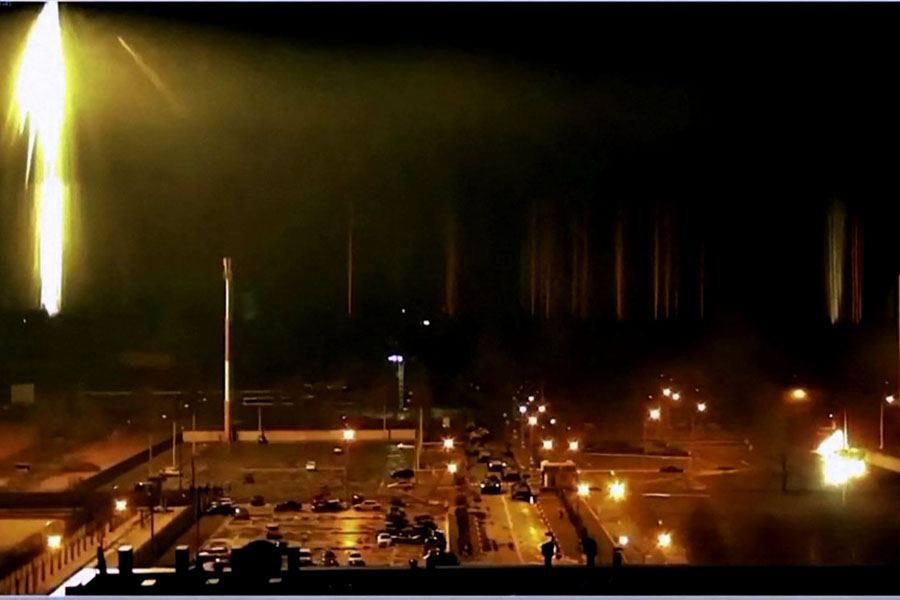 A file photo of a screen grab from a footage of the Zaporizhzhia nuclear authority shows a wide view of the Ukrainian nuclear plant during attack with shell fire by Russian forces in early March. Image: Zaporizhzhia NPP / ESN / AFP

Anastasiya Rudenko clutches the gleaming gold medal her late husband Viktor was awarded for working in the Chernobyl nuclear disaster zone.He died in 2014 from bladder cancer — perhaps a result of radiation, she thinks. Now she mourns his loss in the Ukrainian village of Vyschetarasivka, across the river from the Zaporizhzhia atomic power plant.

Kiev and Moscow accuse each other of shelling near the facility. Rockets have struck a radioactive waste storage area and monitors warn of a "grave" crisis with potential for catastrophic fallout.
Across a 14-kilometre (nine-mile) stretch of the Dnipro River, the station's hulking silhouette is clearly visible from the village where Rudenko handles paperwork proving her partner's fateful role in history's greatest nuclear calamity.
"We could have the same fate as the people of Chernobyl," the 63-year-old told AFP. "There's nothing good in what's going on, and we don't know how it will end."

Ukraine remains deeply scarred by the 1986 Chernobyl nuclear catastrophe, when a Soviet-era reactor exploded and streamed radiation into the atmosphere in the country's north.
Russia captured the site when it began its large-scale invasion of Ukraine in late February, stirring safety fears, but it was abandoned within weeks when Moscow failed to take Kyiv.
The Zaporizhzhia nuclear power plant in southern Ukraine was also occupied in the early days of the war but it has remained in Russian hands ever since.
Also read: Russian strikes near Ukraine nuclear plant kill 14
Ukraine says enemy troops are launching attacks from the facility — Europe's largest — and its own military cannot return fire.
The escalating situation brings dark echoes from the past for those with close links to Chernobyl.
Anastasiya's husband Viktor worked as one of the 600,000 "liquidators", tasked with painstakingly decontaminating the "Chernobyl exclusion zone," where high radiation levels forced civilian evacuations.
The official death toll of Chernobyl remains just 31, however that figure is hotly contested with some estimating that thousands of liquidators may have suffered fatal doses of the invisible rays.
Viktor drove a truck in "the zone" for a total of 18 days. A gold service ribbon awarded by the Ukraine Chernobyl Union shows atoms swirling around the "bell of Chernobyl", a symbol which has become a ringing reminder of the event.
A brittle document from Ukraine's defence ministry archives certifies Viktor's work and the dose of radiation he absorbed — 24.80 roentgen.
"When I see my husband's papers, I feel pain," explained Anastasiya. "Many people died or were permanently injured."
"When the Zaporizhzhia plant is being shelled we can see it quite well," she added.
"People are rumouring that there is something leaking, but they avoid publicly admitting it."

Vasyl Davydov says there are three "liquidators" still living in the village of Vyschetarasivka, a bucolic collection of garden-fringed bungalows with a hazy view of the Zaporizhzhia plant's six reactors and twin cooling towers.
He is one of them. He spent three and a half months working on Chernobyl decontamination, with 102 trips to "the zone" operating a crackling dosimeter to measure levels of radiation and razing tainted homes to the ground.
In his garden the 65-year-old unpacks his own service medals onto a refrigerator lying on its side, used as a makeshift table. One depicts the figure of Atlas holding the world, the image of a globe supplanted by the Chernobyl plant.
Also read: More Ukraine grain sets sail amid new strike at nuclear site
There are pictures too. Of Davydov as a handsome uniformed serviceman, posing with comrades and in front of a patriotic sign declaring: "Soldier! We will revive life on the grounds of Chernobyl." "I was there. I saw it all, and I saw the scale," he said.
Just days after Russian troops took the plant iodine tablets, to block a certain kind of radiation, were handed out in the village in case of emergency, according to Davydov.
But his time working in "the zone" seems to have inured him to a fear of living opposite the Zaporizhzhia plant, even in a moment of crisis.
"If you believe everything, then you can go crazy," he said. "So you filter everything through your experience." "What will my fear do?" he asked. "How can it help me?"
By Joe Stenson

Tweets by @forbesindia
Out with the green: US homeowners are making their gardens drought-resistant
Reebok-owner ABG agrees to buy fashion group Ted Baker