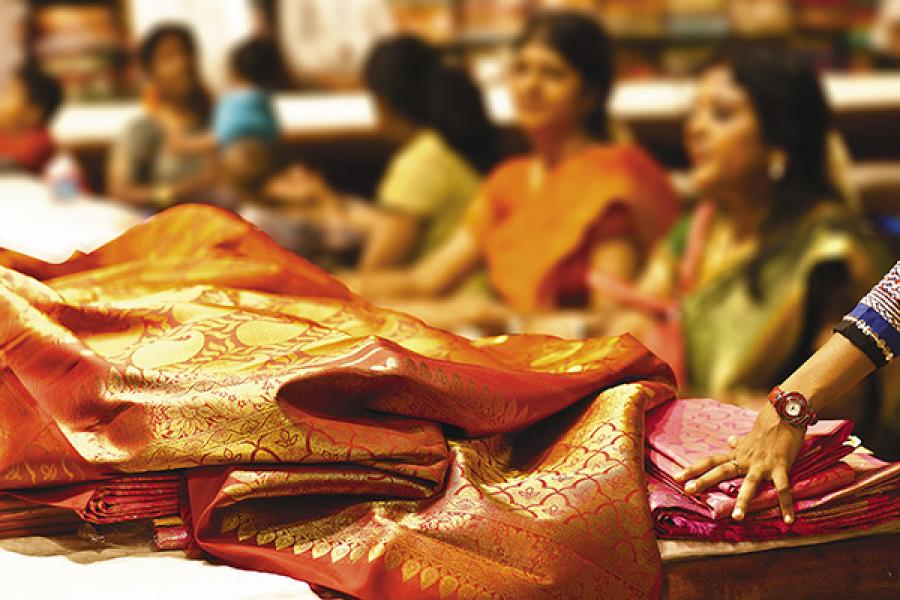 Image: Raju Patil for Forbes India
UP, UP AND AWAY The unfettered price rise has hit the Kanchipuram weavers hard. The cost have doubled in three years and customers, who used to buy at least half a dozen saris for a wedding, barely buy a couple

In one of the most memorable scenes in Priyadarshan’s Kanchivaram, an award-winning Tamil film set in the Kanchipuram of the ’40s, Vengadam, a silk weaver, carries his tired wife on his shoulders to show off a sari he had woven for his master’s daughter on her wedding day. As they rush to the venue, his eyes brim with the pride of a creator. But his wife’s wistful eyes betray a different emotion—her longing for an exquisite silk sari.

Some scenes later, the protagonist, played by Prakash Raj, promises his newborn daughter that he will get her married off in a silk sari. But, as society conspires otherwise, he fails. The movie ends on a bitter note as Vengadam poisons his invalid daughter and tries to cover her body with a half-woven sari, a poignant metaphor of unfulfilled aspirations.

The Kanchipuram of today is nothing like the Kanchipuram of the ’40s. The town, which derives its name from kanchana or gold, is situated about 60 km from Chennai and is a bustling economic hub. The roads are dotted with tourists, pilgrims and young men in smart formals waiting for their office buses to pick them up.

The lives of the weavers have improved, too. Over the years, they have formed co-operative societies that help them participate in and benefit from the market directly. “The ’90s and most of the last decade were good for us. That was the time we all made money. The bonuses were good, and that was when many of us built our own houses,” says M Venkatesan, a weaver.

Then came the twist of irony.

The sari that symbolised high living for decades started to become a tad too expensive even for the well-heeled, thanks to the sky-high prices of gold and silver. Both the metals are extensively used for the intricate zari work on the sari.

Ten years ago, you could have bought 10 grams of gold for Rs 4,900. Now, the price is hovering around Rs 30,000 and is expected to touch Rs 32,000 by Diwali. Silver also costs 15 percent more than last year. This unfettered price rise has sounded the death knell for the silk weavers of Kanchipuram. Costs have doubled in three years and customers, who used to buy at least half a dozen Kanchipuram saris for a wedding, have pruned their shopping list to barely a couple.

The retail shops see a brisk business, but the demand is for factory-made saris, not handmade ones. This has sent the fortunes of the Kanchipuram co-operatives into a tailspin. Out of the over 250 societies, only four or five are doing well. The number of looms has come down to about 20,000 from 50,000 in the early ’90s. Many weavers, especially the younger ones, have taken up jobs in the automobile and electronics factories that have come up on the outskirts of Chennai.

In some ways, weaving is an accidental industry in Kanchipuram. There are no silk farms in and around the town. Silk comes from Karnataka and the zaris from Surat. The town’s only contribution is its talent and a long tradition of making a product that is distinctly different from what they make in cities like Varanasi, Dharmavaram or Arani.

Weavers here use two strands of silk, making it heavier and sturdier than the others. The borders—whose base contrasts the rest of the sari and which carries most of the zaris—are broad. The artists buy zaris by marcs (equivalent to 242 gm) that comprise 57 percent silver and 0.6 percent gold. Zari work accounts for about 30 percent of the weight of a sari. That means a sari that could have been priced at Rs 4,000 in 2007 costs no less than Rs 7,000-Rs 8,000 now. 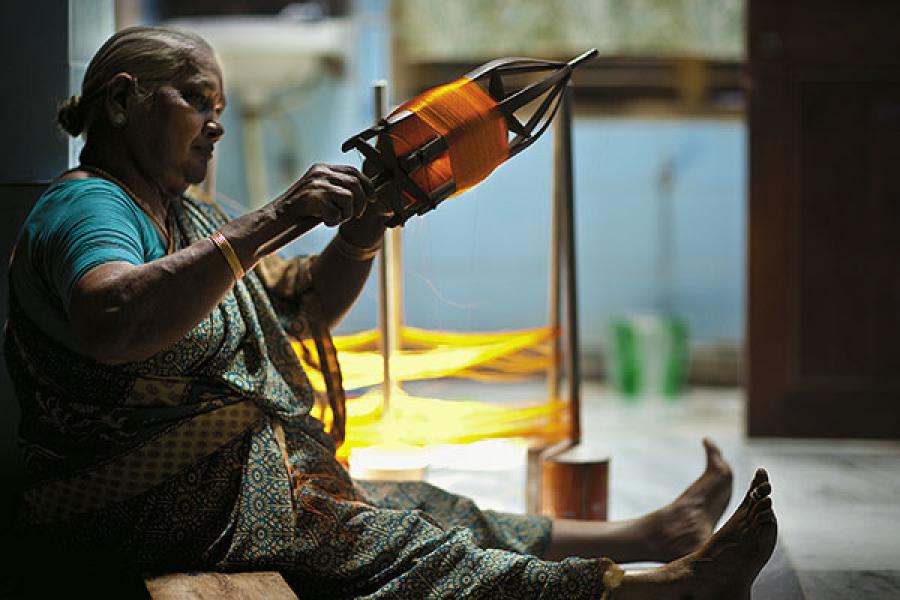 Image: Raju Patil for Forbes India
MAKING ENDS MEET Many of the younger weavers are moving away from the profession. There is concern that over time, there won't be many left who know the art
The customers have started to look for alternatives. “If a bride got a couple of saris for her wedding earlier, she gets only one now. If close relatives got one earlier, they get none. When they buy, they go for the cheaper varieties,” says Manikavelu of Ananda Silks, a retailer with a showroom in Kanchipuram.

Unlike other industries that win back customers with price correction, shifting preferences spell doom for the silk industry. Kanchipuram sari is a niche product, too heavy and ornamental for frequent use. People buy it once in a while and as a matter of habit. If they stop it, even declining prices won’t bring them back. “Once a new fashion comes in, the old simply vanishes,” says Manikavelu.

Second, powerlooms are banned within a 30-km radius of Kanchipuram; a sari is the handiwork of a group of skilled workers. But as profits plunge, more and more people are moving away from the profession. “Twenty years on, even if someone wants the sari, there may not be anyone to make it,” says E Muthukumaran, secretary of Kanchi Kamakshi Amman Silk Weavers Society, the oldest and one of the biggest in Kanchipuram.

The district is now emerging as an industrial hub for automobile and electronics manufacturing companies like Hyundai, Ford, Mitsubishi, Nokia, Samsung and Dell. These companies, by promising a stable salary and status, are a big draw to the youngsters. When there is an occasional rise in demand for the silk saris, retailers and distributors face a bottleneck. “It’s difficult to find a weaver below 30 here,” says Muthukumaran.

Weavers have tried to get around the handicaps, but that often means quality compromises. Thinning down the hallowed zari borders, for instance. Now, even the best-selling varieties have minimal designs. Worse, some weavers have started to use chemical zaris that use copper strings instead of silver and are coated with a chemical that shines more than gold. The sari costs a third of an original Kanchipuram. “Some shops pass off a normal sari as Kanchipuram silk, as common people don’t know. This affects its brand value,” says Muthukumaran.

There have been attempts to ensure that the brand value doesn’t get diluted. There are machines to test the gold and silver content of the zari. A Kanchipuram sari also comes under GI Act (Geographical Indications of Goods Registration and Protection Act). But these measures don’t address the bigger problem of demand. “What’s the point of telling customers that the product is genuine when they are really worried about the price?” asks Manikavelu. To bring down the price, Kanchipuram societies considered lowering the official standards of zari sometime ago with lesser gold and silver content. But they finally decided against it.

The dwindling sales have a telling impact on co-operative society members like M Govindarajan. His house is in one of the small lanes in the southern part of the town. When the sun shines, the alley comes abuzz as the locals dry long silk threads out on the streets. But, such days come few and far between. Typically, Govindarajan and his co-weavers collect silk and zari from the society and take about 15 days to weave a sari, working eight hours a day. Even if he makes two saris a month, it doesn’t take care of his expenses. Now, he looks beyond weaving to make ends meet; by day, he is an insurance agent.

Dr CK Raman, former chairman of the town’s chamber of commerce, says one way to keep the product alive is by allowing mechanisation and powerlooms. Scale can bring costs down. Won’t that dilute the sanctity of a handwoven sari? No, argues Raman. Earlier, even the designs were done manually; now, it’s all computerised. It has only expanded the variety and scope of the saris, he says.

Removing the curbs on powerlooms may be the right move in the long run, but poses an immediate risk of alienating the existing weavers. Also, underlying concerns about the labour shortage is the belief that the demand for Kanchipuram silk saris will not entirely vanish. Perhaps no one is as confident as N Balasubramainian, an octogenarian master weaver. He learned his craft in the early ’50s from another weaver in the same street and eventually built his own business. He now has over 30 looms and a couple of showrooms. “Taste keeps changing, but the fundamentals of weaving won’t. It’s important that we keep making what our customers want. And there will always be a demand for beautiful objects,” he says.