Sanjiv Goenka: Our PM is almost a human locomotive

Much depends on the hardworking and tireless Narendra Modi, but he shouldn't become a robot either 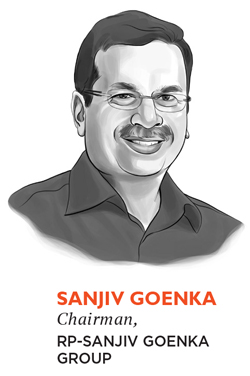 Recently, a friend described the role of India’s prime minister (PM) as that of a driver steering a massive overloaded truck, negotiating an old bridge. India, since independence, has been fortunate to have had some outstanding people to lead our newborn democracy, burdened with innumerable problems, both at home and abroad.
Our current PM has aroused worldwide admiration for his style of functioning, his commitment to principles and his novel way of feeling the pulse of the nation on a day-to-day basis. At the same time, he is committed to carrying the “people of India” with him. I am particularly fond of the PM’s recent statement: “Is there a policy paralysis anymore? No. Is there a transparency issue? No. Is there stagnancy in government? No. The faith has been restored­—there is pace in governance, economic progress and global pride.”
Being a spiritually inclined person with deep commitment to Swami Vivekananda, Narendra Modi has simplified his Himalayan task: “Our vision and commitment is towards the country’s progress, its place in the world, and the happiness of its people.” We are fortunate to have a PM who is almost a human locomotive, waking up at 5 am and working almost non-stop till past midnight. According to reports, he takes only two 30-minute breaks for his simple vegetarian lunch and dinner.

His first 100 days in office have been watched carefully across the globe and India has regained some of its lost position.
In the first year, the new government has shown unprecedented energy in establishing good governance with good intention as a hallmark of the new government. Through our new PM, we have largely restored the faith in the country’s capacity to deliver “with transparency, efficiency and speed”.

It is said that this government has been blessed by favourable international economic developments, particularly the unprecedented fall in oil prices. 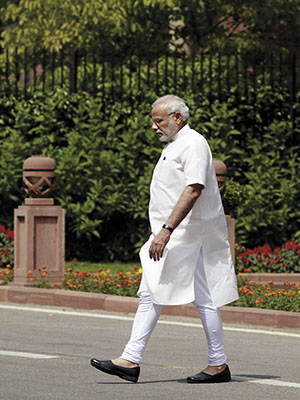 Image: Getty Images
At 64, Modi is an example of hard work; waking up at 5 am and working almost non-stop till past midnight, with just two 30-minute breaks for his vegetarian meals
Personally, I think that as members of a mature democracy, all Indians are entitled to expect our PM to look at all the problems affecting our living—from cleaning the Ganga to controlling inflation.

The remaining four years of the Modi government are likely to be highly interesting, though challenging. We, as a nation, are in the process of regaining our confidence in ourselves. The ‘Make in India’ slogan is likely to immensely benefit a nation that increasingly depends on imports.

I think the current environment outlined by Modi has the potential of revitalising India’s manufacturing, as also its agricultural programmes. The PM’s call to give ourselves a clean and green government, which is also highly efficient, should help sharpen our economic goals. I particularly like the slogan ‘Shramev Jayate’. This should help India convert into a knowledge society.

As the world gets more competitive, our prime minister has to lead a successful campaign to be one of the winners at the marketplace.

It will be interesting to watch how our PM successfully manages to lead people with conflicting interests towards the winning post in the next four years.

A country of our size and problems, of course, needs a hardworking PM, but we don’t want him to be a robot. At 64, Modi is an example of hard work, but so much depends on him. Members of a mature democracy should, therefore, give their PM a few more hours to rest and recreate.

Tweets by @forbesindia
Ridham Desai: Govt's approach to problem-fixing is impressive
R&D set to get a shot in the arm at Tata group